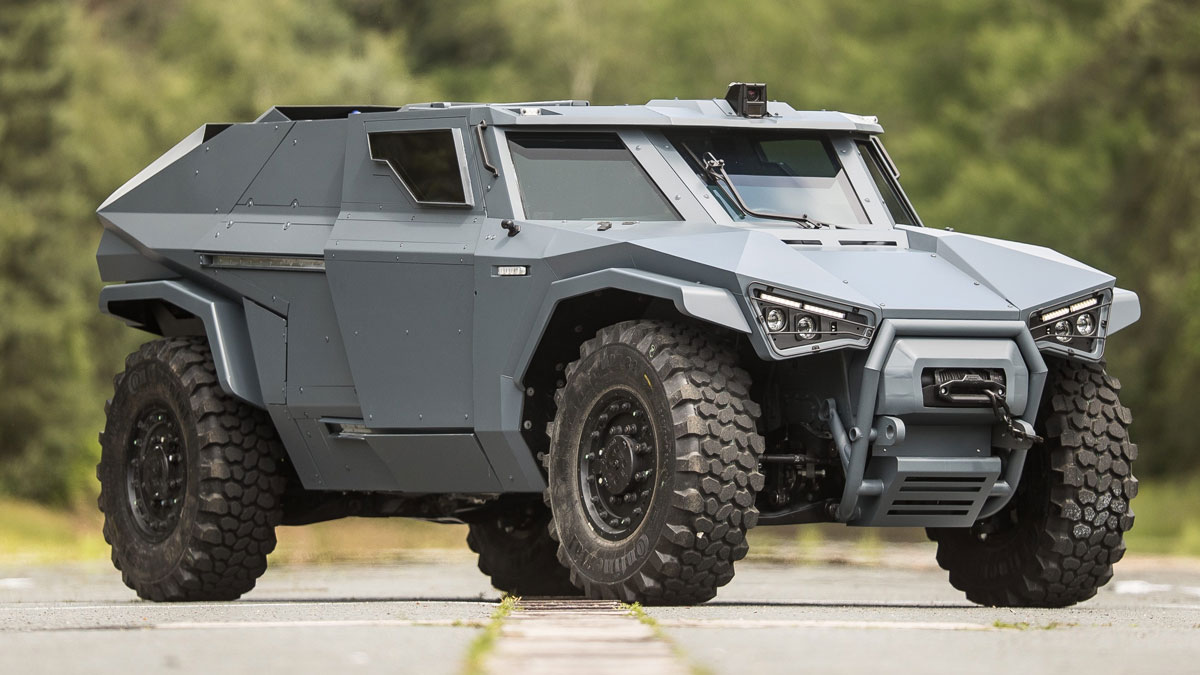 ARQUUS debuted its Scarabee, an armored 4x4 military vehicle built with both traditional and EV technology, at the Summer 2019 Paris Air Show. There attendees got a look at what ARQUUS calls the first ever "natively hybrid" military ride, one made for reconnaissance, scouting, and support that endeavors to reinvent energy requirements for field mobility.

The Scarabee's hybrid drive includes a "boost" mode that recruits both its thermal and electrical engines, as well as an "all electrical mode." More than an environmentally-conscious approach, the hybrid nature gives the 4x4 some stealth advantages. Tactical approaches in the all-electric mode would allow the Scarabee to approach targets silently, and with no thermal signature, plus sit through a long, silent watch with all systems on. (Yep, the same characteristics considered disadvantages in consumer EVs, and ones causing electric car manufacturers to start adding sounds to the vehicles so pedestrians and other cars know they're coming.)

Scarabee armor includes ballistic and mine protection, with a design for "collaborative combat" that allows the vehicle to carry systems ranging from multi-purpose RCWS and a multi-caliber cannon to RGL cameras and anti-drone systems.

The SHERP ATV may flaunt 'roided out rolling and hauling, but the Land Rover BackPacker brings the equally enticing wee and minimalist to backroad and off-road travel. A travel vehicle concept developed by German transportation...

You've got to TRED yourself together / You've got stuck in a mud road / And now you can't get out of it / Don't say your traction will get better / Now you're stuck in the off-road / You need TRED to get out of it...

I nominate bench pressing an Earth Traveler teardrop trailer for an event in the next CrossFit Games. Or maybe a World's Toughest Mudder obstacle of harnessing a 250-pound Earth T250LX to a runner's back and having him...

I wouldn't mind some Canoo-dling in - or, to be honest, even with - the Canoo EV Pickup Truck. This newest addition to Canoo's line of "purpose-built electric vehicles," is set to launch in 2023, with pre-orders beginning...

Now that people are (mostly) convinced Tesla's Cybertruck is real, Mattel is speeding onto the futuristic EV's merch scene with a Hot Wheels x Cybertruck collaboration. In mid-December 2020 they plan to ship 2 RC Cybertruck...

The Hover-1 Cruze says it's got the world's first patent for a skateboard with power-assist technology. In other words, it's an electric skateboard with a 150W motor you control entirely with your feet...

Kairos is accepting preorders for the world's first and only (let's see for how long) mechanical-smartwatch hybrid. The series' 2 designs and 4 price points aren't cheap, but at rates of 50% to 60% off expected eventual...

Here comes the airplane! And, holy crap, it's cutting off Lambos and riding the asses of Ducatis. We've seen the motorcycle that flies with the Hoverbike</

Foosketball is the tabletop game hybrid I never knew I always needed. Foosball meets basketball, baby. It's right up there with the Pizza Hut Foosball Pizza Box, but maybe a little under it because the latter incorporates...

Behold the QUANT e-Sportlimousine with nanoFLOWCELL energy storage technology. Whoa. That's a clunky mouthful and visually muddled line*. Especially for a concept electric sports car that can glide to peak speeds of 235mph...

The Hybrid Race Replica, or HRR, Motorcyle is a material science concept racing bike that harnesses the power of 1 million babies, er, I mean the sun, with its thin film solar paint, as well as colleccts clean backup...