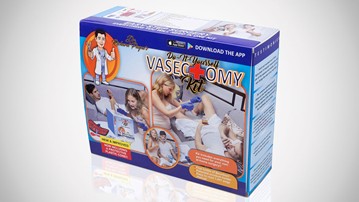 So. If you have to buy gifts for people you don't like much, why not make them subversive gifts? Gifts them undermine their recipients, bring them down a notch or two, embarrass the smugness right out of them. You like it? Yeah, me too. Enjoy.

Note: All subversive gifts for people you don't like much are priced as they were at printing on July 12, 2022. Pricing, and availability, are subject to change.

For entitled teens and grads and adult children who are all, "Gimme, gimme, gimme!" No courtesy, no appreciation, no attention span? Then no money, son!

This DaVinci Code-style cryptex, which must be solved before the goods inside are accessible, will likely return hours of: chuckles at first sight; realization that the quest to code-crack the giver's choice of 5-letter words is on; 6 to 12 minutes of giddy fun testing and turning the Puzzle Pod's rings; 2 to 3 minutes of gentle frustration, followed by another 2 to 3 minutes of polite requests just to reveal the correct combination; and 65 to 105 minutes of escalating irritation, culminating in throwing the cryptex out the window...and then scrambling to retrieve it, along with a sledgehammer, because after all, there is money inside.

For the bro who's a little too bro-ey, or the bachelor having a party to celebrated his pending marriage to your true love. Dissolving Swim Shorts are woven with special thread that disintegrates when exposed to water, probably slowly enough that the wearer will have time to get out of the swimsuit before it turns into a birthday suit, but then again, being submerged in water can mess with your senses, and being 3 margaritas in and submerged in water definitely messes with your senses, so they may not even notice their swim shorts are dissolving until crack, cock, and balls have already made their appearance.

For your stuck-up Aunt Jan. Doesn't really look like a sex toy on the surface, so wrap it up unboxed and tell her it's a cat toy.

For the obnoxious, demanding soon-to-be Momzilla cousin who put you in charge of decorations for her baby shower.

They say it's a nondescript "4' inflatable zombie baby," but I'm pretty sure it's Petyr from What We Do in the Shadows. Or maybe The Master from Buffy. Or maybe the lovechild of them both. Speaking of which, this super creepy yard decoration looks a lot more like a 4' inflatable vampire baby than a 4' inflatable zombie baby to me. Unless it's a zombie vampire, which, I'm not really sure how that would work since vampires turn to dust when they die, and would therefore have no corpse for witchcraft or a manmade virus to revive.

For your MIL, obv. Slip it over the Barefoot Contessa cookbook your wife got her when no one's looking.

The Best Cities to Visit with Assholes & In-Laws Book Jacket is sold book-less for use as a hilarious gag gift. And it doesn't just come with a flash of funny - the front artwork and faux book title - it sees the joke through with more art, and a silly blurb and excerpt, on its back covers too.

Additional prank book jackets in the series include: Metropolitan Pubic Art, 101 Ways to Avoid Love & Affection, Killing with Kale and Other Farm-to-Funeral Foods, and Communicating with Silent Farts.

For the judgy friend, who also happens to be perpetually single. At just 5" in diameter, I'm sure the GreenPan Mini is a staunch believer that size doesn't matter, it's what you do with what you've got. And when it comes to sizzling up breakfast, lunch, or dinner for one, this nonstick, non-toxic ceramic skillet says it can do a lot.

Use the GreenPan Mini to cook up a single serving of everything from bacon and eggs to french toast, and grilled cheese to burger patties. The skillet is also dishwasher-safe for easier cleanup.

For your mean ol' grandma. Tell her in earnest your jaw dropped when you saw the Senior Woman with Asthma Wall Mural - you couldn't believe the resemblance!

I guess Wallmonkeys prints this vinyl peel-and-stick art legit for doctor's offices and hospitals and, like, 65+ MMA leagues, but obviously its highest and best use is as a gag gift. And as reviewer fodder on Amazon, which has some 5-star gems.

For the eco-warrior who is always passing judgment on your environmental practices and carbon footprint. Include a "Use by" date that's two months out.

The plants will grow and the rivers will flow over my dead body. Literally. For real. No joke. On May 21, 2019, Washington State legalized "the contained, accelerated conversion of human remains to soil." Recompose, a Seattle-based startup calls this alternative to cremation and burial "natural organic reduction." I call it...human body composting, baby!

For the aforementioned girlfriend you don't like, but haven't gathered the balls to break up with yet. Welp, the countdown is on, because this candle burns an apple pie scent for 3 hours, and then turns to dirty farts for the remaining 37. If you prefer vanilla segueing into vomit, click here.

Yeah, it's a prank gift box, but you have a lot of prank gift boxes to choose from these days. The DIY Vasectomy Kit is the prank gift box you've chosen special for Elon Musk, or any other dude you know who has too damn many kids.

Or who has no kids at all, but should do the world a favor and not procreate.

For Dad, who's forever picking his teeth and then setting down his used toothpick on shared surfaces. Here's a different kind of "wood stick" for ya, old man.

Texas Toothpick is a euphemism for this 2-pronged S-curve's true nature and intent. I almost selected it as the next edition of What Is This Thing? but decided its application isn't discrete or practical enough to make it a fair pick. But still, you're probably wondering, "Uh, what is this thing?"

The Best Gifts For Seeking Revenge on Frenemies

I am drawing this Ex-Boyfriend Revenge Kit to the world's attention only so that if anyone sees a woman carrying a bluish-greenish colored purse you'll know to report her immediately to a shrink, the police, and Batman...

I just read the best analogy of anything ever on ShipYourEnemiesGlitter.com: "Glitter is the herpes of the craft world." Oh hell yeah it is. Glitter is hideous. Glitter spreads like wildfire. Glitter gets into crevices...

I'd say a Custom Shrunken Head Replica would make a great revenge gift for a frenemy, but given its cost and, more importantly, sheer awesomeness, I think I'd like one of Supermongrel Studios' ultra-realistic tribal trophies...

Hatemail won't just print you the perfect card for your ex / arch nemesis, they'll mail it for you. With a personalized, custom message. 100% anonymously. If you like...

Ahhh, nothing like the holidays to remind me whose face I'd like to take a giant piss on. PPShots produces Adhesive Photo Protectors--clear toilet sticker designed to house and keep intact photos stuck on the inside of...

Mechanical Mouse Jiggler (So They Think You're Working)

This mechanical mouse jiggler is recommended by 5/5 slackers, underpaid employees, people out of PTO who need some TO, and dudes and ladies with a weird compulsion never to let their computers log off or go to sleep...

People I Want to Punch in the Face

A comprehensive collection of people you want to punch in the face. This is the little black book anyone can fill. In fact, it would probably be a good idea to order a few Rude Books, 'cause you know you're gonna want...