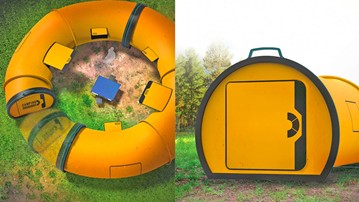 Wonderful, fantastical, cutting edge, high-tech products, I hardly knew ye. These 12 cool products that were discontinued or never made will probably make you feel a bit nostalgic, or maybe even bummed to have missed out.

Well, either that or hoppin' mad that you backed them during their crowdfunding campaigns, their swashbuckling creators kept your money, and you never got your frikkin' projection watch / 10-second toothbrush / set of human gills! Where is my human-to-fish converter, bitches?! [Deep breath.]

So grab a beer, a bag of popcorn, and maybe a Xanax and a fat bowl to calm yourself down, and enjoy my roundup of 12 cool products that were discontinued or never made.

From the Nordic Society of Invention and Discovery - yes, that's a real society, not one made up by Wes Anderson - came No More Woof, a definitely made-up device claiming to plop latest technology in micro computing and EEG down onto the heads of dogs, so as to translate their barks, groans, and sighs into plain English.

Unfortunately, follow-up reports from Popular Science, plus some professors of brain-related disciplines at various illustrious universities that I did not attend, heralded NSID's No More Woof as...bogus. Verbatim. The name of the article is "This Dog Thought-To-Speech Translator Is Bogus". But you knew that already, right?

Still, a dog to human translator would have been nice. It's far time people who dress their dogs up in corduroy pants and pink dresses and kiss them on the mouth have the opportunity to hear in a language they understand that the object of their affection needs to take a piss or would like the clothing adjusted so that it can lick its crotch.

There is some good news: since No More Woof's 2013 debut, we have made some progress on communicating with our dogs. Check out Christina Hunger's Teach Your Dog to Talk Buttons.

Defying all laws of biology, technology, and biotechnology, the TRITON "human gills" underwater breathing apparatus is coming to a store near you...never! Never ever! Never, never, ever, ever!

In March 2016, after garnering a lot of attention as a design concept, the forces behind TRITON claimed they had the tech and capabilities to bring this "re-breather with artificial gills" to life. All that was missing: the means. TRITON hit IndieGoGo as a crowdfunding campaign, charging backers $299 apiece for a chance to own one of the featherweight, tankless SCUBA systems.

However, after repeated call-outs as bunk, balderdash, and BS, the TRITON crowdfunding campaign was cancelled. ... Then it relaunched. ... Then it got cancelled again. Those behind the rebreather ended up refunding over $900,000.

Ritot was a watch with a simple goal: to merge smartwatch technology with wristband minimalism with humans' love of bright lights and holograms.

At the heart of the timepiece would lie pico projector to output illuminated graphics displaying the digital time, plus a variety of other user-specified notifications. You could pick the color and how long the projection would appear, as well as choose to activate it via a push button, or just by shaking your wrist.

In addition to looking pretty cool, the Ritot also sounded reasonable, like a thing that could definitely exist. At least to the average consumer. A wee little projector watch that shined the time right on your hand. Sure, it would be something new, but this was 2014. There was a lot of new shit going on.

Alas, it was not so. The technology Ritot claimed to use was not, in fact, possible (I don't know if that's still true, 8 years later) and the crowdfunding campaign they ran to product the projection watch proved to be yet another scampaign.

Muzo claimed to use anti-vibration technology to turn the world off. At approximately the size and shape of a computer mouse, the personal zone creator and noise blocker was designed to sit on or adhere to any smooth surface in your vicinity, where it would prevent surrounding objects from vibrating, and create a "bubble" of serene space around you.

Muzo was to have various settings for noise cancellation, "scene creation" sounds for sleeping and ambience, and sound masking (i.e., privacy and secrecy).

What Muzo actually had: a lot of bad reviews, debunks, and angry crowdfunding backers demanding their money back.

The Amabrush was meant to be mouthpiece full of ultra-dense antibacterial silicone bristles that vibrated on the end of a rechargeable handpiece to annihilate 99.99% of mouth bacteria, and provide a full toothbrushing session in just 10 seconds.

The Amabrush was also meant to be affordable, and manufactured in the EU, a combination its creators quickly discovered was not possible. So the Amabrush disappeared from our lives like a loose tooth into a caramel apple.

It cost more than twice the United States' 2011 median income, but two little words made it worth every penny: Street. Legal.

If you could convince the bank, or your mama, to spot you the cash, a living, breathing replica of the computer-animated cycle from the 2010 film TRON: Legacy would have earned you the awe and admiration of every pulse-possessing male aged 8 to 44.

I used to ask for this giant Reese's Peanut Butter Cup Cake every year for my birthday, starting in 2012 when I first saw it, and continuing for years, right up until the one when my mama yelled at me, "They don't F-ing sell it anymore! And you've got peanut butter oozing out of your brains if you think I'm gonna bake you one from scratch!"

This furniture-playground hybrid was brought to life by O*GE Creative Group, headed by Gaston Zahr and Merav Eitan out of Haifa, Israel. Bird's Nests were available in 3 different sizes, the largest 14.8' in diameter, all brimming with plush pillow eggs for adjustable, ergonomically-pleasant vertical and horizontal positions.

Sadly, a note on the O*GE website informs us, "After years of producing the nest for various clients, shows and movie set ups, we regret to inform that we are currently overloaded with different work and new adventures and therefore at the moment do not sell this nest anymore."

Oh boy, it's like a dinosaur mixed with a firefly mixed with that neat-o photosynthesis word I learned in middle school. Back in 2013, Dino Pet, a compilation of living, bioluminescent organisms called dinoflagellates housed in an apatosaurus-shaped container, volunteered to teach your children about science and responsibility. Plus ease their fears of the dark. Plus look super wicked rad.

I don't know what happened to the Dino Pet, or the other bioluminescent products maker BioPop introduced us to. Though originally a Kickstarter campaign, the Dino Pet & friends made it through production, and seemed quite successful for a few years. Then, poof!, like a bunch of dead dinoflagellates, it was lights out.

Admittedly, we can't mourn the loss of the ZERO Helicopter because it was neither never here, nor never promised to be here, to begin with. The hamster wheel of a helicopter was always just a concept and collection of renderings developed by Hector del Amo, and showcased on design forum Behance.

Still, it's an eye-catcher. A real clicky, viral one.

Phonebloks' modular nature - a compilation of detachable and swappable parts - intended to facilitate phones fully customizable to individual needs and preferences. Into snapping photos? Choose a fancy camera blok. Save all of your info to the Cloud? Downgrade your storage blok in favor of a larger battery blok and longer charges. Then reverse the move a few months later when the Cloud Fs you in the A, and you decide additional drive memory is necessary after all.

While Phonebloks did move forward with development on its own, economic and technical barriers plagues it along the way. Eventually, Hakkens teamed up with Motorola in an effort to get additional resources behind the most excellent idea. Then once Google bought Motorola, the tech giant reimagined Phonebloks into its own Project Ara, with an intent to launch the modular phone in 2017.

And you know the rest.

That is, that it never happened.

The The Camping Doughnut is another product that was never given a life to lose, a concept from Sungha Lim, Hyunmook Lim, and Han Kim. The trio's design stemmed from an attempt to both make the worst part of camping a little easier, and to harvest a sense of community and individual space.

The modular tent substitute sets up in 4 different shapes. "I" shapes are a single, straight tube capable of housing 2 to 4 people in a pair of sleeping rooms and a living room. The curved "C" shape Camping Doughnut offers the same accommodations, but also blocks wind on 3 sides to generate a central outdoor space for campfires and recreation. Combine two Doughnuts to create an "S" or "O" shape for additional space, privacy, and weather shielding.

14 of the Most Creative Redesigns of Classic Products

Another title for this collection of 14 of the Most Creative Redesigns of Classic Products might be 14 Really Cool Things to Look At. Items range from household goods to watersports, with some serving simply as unique...

The Exolung is a prototype for an underwater breathing device that gives shallow-water divers the freedom of a SCUBA, without all of the elaborate equipment. More probably, it will be the snorkelers who swim towards Exolung's...

Rollin' like a...dandelion? Despite their flowery name and wispy connotation, Dandelion concept tires from NEXEN are big 'n' burly issues, built rugged enough to traverse just about any terrain. The low-maintenance, never-flat...

Designer Hadar Slassi's Walk Of Mind shoes scored a 2019-2020 A' Design Gold Award in the Footwear category for their custom-molded hybrid design concept. Slassi uses 5 layers to build the shoes, calling each a "stratum"...

Dominic Wilcox must fall asleep in church a lot. The offbeat designer modeled his Stained Glass Driverless Sleeper Car of the Future concept vehicle after the stained glass windows of cathedrals, and calls it the "Mini...

Created as concepts for the Google Digital Wellbeing Experiments platform, Envelope cases are simple paper slip-ons for smartphones that transform them into simpler devices. The Envelope above regresses a Google Pixel...

If you thought "Flight of the Bumblebee" was fast played on a normal piano, you should see the speed at which the Piano WiFi 6 Router can tinkle it out. Or rather, let you stream it on your laptop while one kid attends...

The Infiniti Prototype 10 concept e-speedster is Infiniti Executive Design Director Karim Habib's design debut with the brand. It is also the sickest Infiniti I've seen since the J30 came out in 1993. Dude. I f-loved...

Nu'Clear. I hope Mikhail Smolyanov has copyrighted that name for his most excellent concept motorcycle encased in bulletproof glass. Because if not, someone is definitely going to steal it. Maybe even me...