13 Fun Additions to Your Thanksgiving Celebration 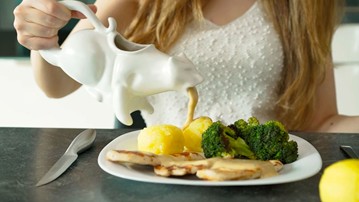 Thanksgiving is hands down...no, elementary school art class turkeys made out of hands down my favorite holiday of the year. Why? Four words: gobble 'til you wobble.

And for those of you dudes who enjoy this most merry festival of eating as much as I do, here are 13 standout products that will make super duper fun additions to your Thanksgiving celebration.

Note: Thanksgiving products are priced as they were at printing. Pricing, and availability, are subject to change.

With the Mighty Carver, you can go from carving up the neighbors on Halloween to carving up the turkey on Thanksgiving without even taking a beat to swap tools! Really!

No, not really. The Mighty Carver is a chainsaw in looks alone. In function it is an electric carving knife for your turkeys and roasts that creator Kimberly Burney fashioned after a power tool for a very deliberate, and I think pretty good reason: she hoped it would entice the men in her family, who loved trimming limbs and cutting up logs in the yard, to volunteer when she asked who wants to carve the turkey.

It's pumpkin spice on crack! No, not really. Just a whole helluva lot of caffeine. Pumpkin Chai Death Wish Coffee is the Death Wish brand's fall-appropriate seasonal offering, an effort to appeal to both the pumpkin-spice-obsessed and the sluggish, sleep-deprived masses. Like the original Death Wish Coffee, this edition is packed with twice the caffeine as your normal brewable beans, but also contains an infusion of the company's homemade aged chai spice and pumpkin essential oil blend. So it's kind of like Death Wish meets your warm and comforting Fairy Godmother.

The Puking Kitty Gravy Boat is bllleeeccchhh! for the 2021 holiday season! I think we can all agree that no cat owner's Thanksgiving feast would be complete without a kitty hacking up a furball or, like, a piece of dead mouse in the corner. But if you can't get your cat to cooperate, or you don't have a cat, the Puking Kitty Gravy Boat will keep the spirit alive, and the emulsified meat fat flowing, all dinner long.

Dash says its Masha-ed potatoes are the doggone fluffiest. And smoothest. And creamiest. The rotor-cone technology behind this mashing machine purees foods ranging from potatoes and yams to guacamole and hummus in under a minute.

The Masha 2X looks more or less like an immersion blender to me, but more focused in its abilities. Its attachment cones have a larger blade and more vents for pureed foods to pass through so they don't clog up the blade, or break down foods unevenly.

If You Don't Talk Politics, You Will Get Pie Dish Towel

BOOM! The chef has spoken! Stuff your piehole with turkey and cranberry sauce, mashed potatoes and candied yams, maybe even some of that green bean casserole with the crunchy onions on top, and keep your political beliefs and partisan anger locked inside. If you can do that, if you can make it through Thanksgiving dinner without talking politics - and without busting through your pants or puking - then, dear brother / sister / uncle / aunt / cousin / mama / dad / rando +1 with the big, fat mouth, you will get pie.

A Split Decision Pie Pan is genius for Thanksgiving, because Thanksgiving pie is always a split decision in my house. My wife, She-Ra: Princess of Power, invariably wants some Frankenstein abomination like Blueberry Lemon Cheddar Streusel, and I, true to good taste and America, want Apple. With a lattice crust, dammit.

Brach's Candy Corn Turkey Dinner may seem expensive for candy corn, but think of how cheap it is for a turkey dinner. With apple pie and coffee included for dessert! Mama won't even have to cook this Thanksgiving!

The seasonal sack o' sugar includes candy corns flavored like stuffing, green beans, and cranberry sauce, along with the namesake roasted turkey and bonus apple pie and coffee. Young people can test their mouth capacity, jaw strength, and gag reflex, and old people can enjoy their preferred method of eating any meal, by shoving in one of all the different candy corns in the Candy Corn Turkey Dinner, and chewing them up together.

Buzzkill alert! Boots Tees is selling Thanksgiving dinner nutrition label T-shirts, tops advertising the calorie, fat, and carb contents of popular turkey day foods. Choose from over 2 dozen different dishes, and become an ever-present, in-your-face reminder to everyone you see of how fat they're going to get over the next couple of months.

Get Your Fat Pants Ready Banner

And speaking of getting fat, get your fat pants ready, dudes! The Season of Eating, the Festival of Feasting, the Gobble, Gobble...Pepto Bismol...Gobble, Gobble, the Thanksgiving Dinner is upon us! And in case you need a reminder, here's a glittery gold party banner you can hang in your house to ensure you don't leave or sit down for Thanksgiving dinner without your fat pants.

Don't already have fat pants? Sure, sweats will do, but this alternative, this pair of expandable pants designed with human garbage disposals like me in mind, may be preferable for donning to Thanksgiving dinner, especially at homes you've been asked to leave in the past for unbuttoning your pants at the table.

Do I want a silicone bristled basting brush that can also scoop up juicy drippin's, drizzle them onto my dish, and then rest on my cutting board without spreading their remnants all over it? Fo shizzle my Brizzle.

The Brizzle stand-up scoop, baste, and drizzle brush is Dreamfarm's latest creative kitchen tool that makes common cooking tasks just a little easier and more intuitive. In addition to its 100 non-stick, heat-safe to 500F silicone bristles, the Brizzle has a 1-tablespoon scoop on its head, the latter of which bends 90 degrees to give the former access to your basting liquid without tilting your pan or roaster.

A merger of my two favorite things in life - ice cream and stuffing my face - Baskin Robbins' Thanksgiving Turkey Cake is back. Its return wasn't guaranteed. No, the layers of Mint Chocolate Chip and fudgy partitions shaped like everyone's favorite seasonal fowl required the assistance of "popular demand" for its reappearance on the market this year.

That's Baskin Robbins' story anyway. The truth is that "popular demand" mostly constituted me writing them daily letters and emails, and occasionally Fed Exing frozen turkeys stuffed with Mocha Almond Fudge. I think the coup de grace was the live bird covered in buttercream and gel icing I let loose in their corporate offices.

And now, turkey-molded ice cream for everyone!

Floaters can be good - boats, tank rafts with water cannons - and floaters can be bad - poo in the pool, turkey in the brine. The Briner is a 22-quart bucket that pretty much looks like any other 22-quart bucket, except that it secures food in place under the surface of the liquid so it doesn't bob around partially submerged, and end up partially brined.

The Briner's guts consist of a food-grade plastic hold-down plate and a series of notches for plate placement just above the meat or fish you're brining. When the process is complete, you can also use the plate to keep your food penned in while you drain the brining juice in the sink.

Holy smokes...miester! A Weber, a hole saw, and a coupla Bud Light Limes on a Saturday afternoon, and my Bru-BQ Wayne kettle grill becomes a Bat-Smoker too! The Smokemiester BBQ Smoker converts any covered grill into...

Brach's Candy Corn Turkey Dinner may seem expensive for candy corn, but think of how cheap it is for a turkey dinner. With apple pie and coffee included for dessert! Mama won't even have to cook this Thanksgiving!...

With the Mighty Carver, you can go from carving up the neighbors on Halloween to carving up the turkey on Thanksgiving without even taking a beat to swap tools! Really!...

ChickenStone - Roast a Whole Bird in Half the Time

Um. Are you sure, ChickenStone, you wouldn't rather be called CockStone? I mean, I know I'm immature and all, but what human person could consider the ChickenStone's function - to roast a whole bird 50% faster than normal...

What is a Stove Top Stuffing Dinner Jacket made of? An interior lining of minced chicken, soaked and crisped bread crumbs, and savory caramelized onions. The outside, in a surprise appearance, and an affront to people...

Do I want a silicone bristled basting brush that can also scoop up juicy drippin's, drizzle them onto my dish, and then rest on my cutting board without spreading their remnants all over it? Fo shizzle my Brizzle...

Apparently this Transformer Table is the 2.0 version, so my question is, where the 6 tables in 1 was I when the original came out?! The amount of time my fiancee made me spend looking for the perfect dining table with...

Get Your Fat Pants Ready Banner

Get your fat pants ready, dudes! The Season of Eating, the Festival of Feasting, the Gobble, Gobble...Pepto Bismol...Gobble, Gobble, the Thanksgiving Dinner is upon us! And in case you need a reminder, here's a glittery...

You might be slated to carve the turkey this year, but have you signed up to hunt, shoot, field dress, and butcher it too? Browning says its DIY Butcher Kit comes with a blade "for every cutting chore imaginable." Hunters...

It's hard to look at these drink glass markers and not keeping coming back to some variation on the idea of hangin' with Jesus at your next party. But that sort of comment is in very poor taste, and if I'm anything I'm...