18 Gifts You Won't See on Every Other Gift Guide 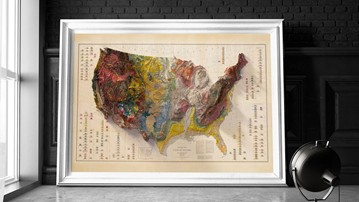 So that's why I put together this equally covet-worthy - albeit sometimes a little zany and off the beaten path - list of 18 gifts you won't see on every other gift guide. Take a look, you might be surprised that you find something for everyone you know.

Or you might find nothing for anyone you know, and not be surprised at all.

Note: All 18 gifts are priced as they were at printing on November 24, 2021. Pricing, and availability, are subject to change.

Worky Home Office in a Briefcase

Worky won't make the chaos of work itself any better, but the home office in a briefcase will contain the chaos of the tools you use to slog through another day of emails, presentations, and video meetings. A latching white box "designed for remote workers by remote workers," Worky endeavors to keep your work space tidy and contained, enable you to work from anywhere, be it a WFH setup or the airport, and, most importantly, make your work crap easy pack out and get the hell out of sight at the end of the day.

I know Halloween is over, but these furry friends & fiends motorcycle helmet covers aren't so much costumes as they are ways to display on the outside who you are on the inside, every time you ride your bike.

Plus, as seller Moto Loot points out, the children, they may laugh at the Ducati rider with an oversized pirate head. The people, they may point at the lady on a Triumph lookin' all like the clown from all of our nightmares from the neck up. But whether you're on a Harley, Yamaha, BMW, or Kawasaki, wear an elf head, a viking head, a unicorn head, or an ultra-furry rainbow monster head motorcycle helmet cover, and you'll ultimately bring joy to everyone you blaze past.

Looking at Joode 3D's KFC Chicken Combo Keycaps has me jonesing for my F1 - F12. The keyboard flair is available in 5 different KFC classics, including a Fried Chicken Bucket, French Fries, Mashed Potatoes, a Sodie, and some Cookies. You can buy the resin keycaps individually or as a set.

Yeah, I've never heard of Niue either. Apparently it's a "small island country." The point is, in addition to being a swell collector's item and gift for Star Wars fans, the Darth Vader Silver Coin is legal tender. Cold, hard cash out there in the world, in circulation, ready to buy you some tacos and a sodie.

If you go to Niue.

Not only do these wall-mounted bicycle holders from PARAX take up virtually no space in your home (though the same can't be said for your bike itself) they look almost artful doing it. PARAX's S-RACK and L-RACK model of bike holder further ingratiate themselves as essential gear for the minimalist with their dual functionality: in addition to racking your bike, they serve as butler trays for your keys, wallet, bicycle helmet, and tools. The L-RACK even folds up nearly flush with the wall when not in use, while its magnetic surface still manages to grasp small incidentals and help keep you organized.

This posable stick figure floor lamp might be just the thing to shed some light on your life. Or at least on the WFH office you had to set up in a dark corner of the basement. And not only the kind of light shining out from an E26 socket and included LED bulb, but the kind of inspirational light of having a silent partner there to encourage and support you. To stand in deep thought or scratch his head with you. To gesture towards your latest and greatest piece of work. To help you practice your power pose.

Watching TV and reading my Kindle from a supine position: check. I like. Lying on my back with my phone propped on my belly and scrolling through Reddit and Twitter first thing in the morning and last thing at night: yep. Like. Lazy Glasses, funky spectacles fitted with image-tilting prisms so I can do it all without contorting my neck or developing arm aches from holding my devices overhead: thumbs up, fire, heart, heart, heart emoji. How many times and ways can I like? Lazy Glasses were 100% made for lazy me.

Sleeping Animal Pots? That's generous. More like Elephants, Giraffes, Rhinos, Ostriches, and Hippos That Got Into Some Rotting Marula Fruit Pots. AKA Drunk Animal Pots. Cute nonetheless, especially if you've seen the YouTube video and know what I'm talking about.

Sold by Sarza, part of their People of the Sun Connect line, the Sleeping Animal Pots feature 5 of the jungle's finest in a "functional take on the traditional wood carving found across Africa." The pots are all handmade from fallen wood, and then hand-painted in enamel, courtesy of Bangwe Carvers.

If you think "audacity" is too harsh of a word for this doormat...then you are almost certainly they type of person who doesn't call or text before "stopping by" people's homes. You are also the type of person I bought this doormat for.

Aunt Jan. In-laws. Guy selling solar panels. Girl Scouts...haha, sike! As long as you've got cookies, you kids are audacity-approved to stop by any time.

This $2 bill is worth its weight in gold! ... Which is still about $2. At least in terms of its legal tender value, despite being layered in 22K gold. Of course, you'll pay many times that for a chance to own the 22K Gold Two Dollar Bill or, more likely, wrap it up as a gift for a kid. I don't care what generation we're on now - Y, Z, Alpha, Lambda - kids never get tired of $2 bills.

For the Chameleon Tape Measure, the artists at Coppertist.Wu have transformed a chameleon's body and coiled tail into the tool's housing, and its tongue into the 6' / 2-meter measuring tape. So clever. So charming. So ready to be wrapped up as a gift for your girlfriend or mama.

Adding to the Chameleon Tape Measure's beauty is the brass construction of its housing, which enhances its reptilian textures, and gives the tape a luxe look. According to Coppertist.Wu the design and execution were not easy, and the process took them 2 years to perfect.

First they fly, then they're flayed! PlaneTags are collectibles hand cut, stamped, and shaped from the skins of retired aircraft. The ID-style tags are a new - and far more affordable - line from MotoArt, the California-based shop that's spent the last 2 decades repurposing salvaged parts from decommissioned aircraft into Ice-Man-cool beds, desks, bars, and other furniture.

Dozens of different airplane types and models have been skinned (kindly, gently, the didn't even feel it!) to create PlaneTags. In addition to reclaiming, cutting, and finishing the smooth ellipses in a range of colors and patinas, MotoArt also individually etches each PlaneTag with a outline of the aircraft, its make and model, identifying information, such as serial or tail number, and the tag's own number in its aircraft skin series.

Whether you're a coffee connoisseur or just a fan of low-tech gadgets, this Belgian balance siphon coffee maker is going to add some panache along with a caffeinated jolt to your kitchen.

The coffee maker consists of a burner, borosilicate glass brewing flask, cloth filter, siphon pipette, and 304 stainless steel vacuum flask. To brew your perfect cup, you'll add water and your favorite ground coffee, and light the burner. Then the laws of physics will take over, stirring in some gravitational energy and vacuum and vapor pressure. Minutes later, up to 17 ounces of hot and delicious brew is yours for the drinking.

We've seen emo football in the winces and whines of Tom Brady. Emo basketball in the tantrums of LeBron James. Emo soccer in the rolling on the ground, gripping a leg in pain from...pretty much every soccer player out there. Emo hockey - well. You get the picture. But Emo Football parody shirts bring emo sports directly to you, the sports fan.

Or perhaps the sports anti-fan, given the Eeyore-to-Biff-Tannen range of messages and logos the shirts, er, sport.

Yes, please, I want a Taking Sides Couple's Snack Tray. My wife, She-Ra: Princess of Power is always stealing my food. And my wine, beer, and cocktails when she invariably sucks hers down first.

Designed for "snacking soulmates" who don't want to share, the Taking Sides Couple's Snack Tray divvies up treats and drinks into the two sides of a carved American maple or cherrywood infinity symbol. Awww, infinity. The amount of time you will love one another...provided she doesn't eat one more of your damn french fries.

As T-Rex was the big boy of the dinosaur world, so too is the T-Rex Tape Dispenser the big boy of the tape-dispensing world. Creator and 3D printer Meow 3D Store lists the plastic Scotch tape feeder's dimensions as 5" x 4" x 3.6", but check out T-Rex's skull in the hands of some happy buyers. It's. Huge.

And, provided you have the countertop or desktop space, ain't nothing wrong with that, because a T-Rex Tape Dispenser is nothing if not a statement piece.

Talk about a dog bowl. These fruit bowls and planters molded and painted custom according to your dog's face remind me of the golden retriever my friend Cornelius grew up with. That dog was bananas. He probably also had succulents for brains.

Another superb print, and great gift for the pet lover, from Meow 3D, these fruit bowls and planters transfer the furry mug of your best canine (or feline if you prefer) friend onto a 12" bowl ready to house your best produce or plant life.

Artisans, craftspeople, entrepreneurs, dudes and ladies with random product ideas that take off like persons of interest from Congressional subpoenas - these are the people who make the holidays, and gift-giving in general...

16 Gifts for Kids the Adults Will End Up Playing With

Adults can't keep their fingers of out the gifts for kids pie no matter what the toy or gadget is - I mean, someone has to fight with the packaging and conquer the assembly - but when I say I've found 16 gifts for kids...