Books on TV: Binge Reads for the Shows You Binge Watch 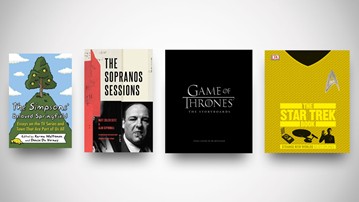 Books on TV, on the shows you stream and series you binge watch on Netflix and Amazon Prime, are sometimes all that's left when the final credits of the final episode roll, and you still want more - so much more! - of your favorite characters and compelling storylines.

Some books on TV were obviously books first. Books that were cut and pasted and crafted with some visual glitter, and put on TV. So if you haven't already, you could feed your addiction at the end of it all (or in the off-season) by reading George R. R. Martin's A Song of Ice and Fire or Diana Gabaldon's Outlander book series, since that's where Game of Thrones and Outlander came from.

But not all TV series have complementary serial novels. And anyway, here I'm not really talking about book versions of tv shows, I'm talking books about the TV shows themselves. Recaps and analyses, behind-the-scenes stories, actor and showrunner interviews, and maybe a few juicy tidbits about the storylines and filming you've never heard before.

These are books on TV for the fans who can't get enough of the shows they cover. They're binge reads for the shows you binge watch.

January 10, 2019 is the 20th anniversary of The Sopranos' debut on HBO. The show went on to become arguably the best of all time, and Tony Soprano's status as an American television icon was solidified further in 2013 with the unfortunate passing of James Gandolfini.

In addition to anniversary reflections, 2019 also brings more talk of the Sopranos prequel full-length movie, The Many Saints of Newark, as well as this book, The Sopranos Sessions. The Sopranos Sessions is a collaboration between TV critics Alan Sepinwall and Matt Zoller Seitz, who work for Tony S.'s hometown paper, New Jersey's The Star-Ledger. Inside you'll find show recaps (i.e., recaps of caps?) conversations, and critical essays discussing every episode.

The Sopranos Sessions also has a series of new long-form interviews with creator David Chase.

Apparently, Alan Sepinwall is an esteemed Breaking Bad critic, and in Breaking Bad 101: The Complete Critical Companion, he presents to you some of his critical opinions on the acclaimed AMC series. Don't worry, despite all this use of a word that has largely negative connotations, my sense is that the essays and commentaries the book includes are meant to fuel your fandom, not challenge, or criticize it.

All the Pieces Matter: The Inside Story of The Wire

I'll be honest, I didn't make it past episode 2 of The Wire, despite friends' urging / badgering to hang in there until episode 5, or whatever. People who love a show who meet someone who doesn't always have a "magic episode number" they swear will make things click for you.

However, I'm not knocking The Wire - how could I went it makes every list of the Greatest TV Shows of All Time? - and am happy show off like a glistening-toothed Price Is Right model to you Jonathan Abrams' All the Pieces Matter: The Inside Story of The Wire.

The book, its publisher claims, is the first concerted effort to provide a "definitive, behind-the-scenes take on how [The Wire] came to be made."

Seinfeldia: How a Show About Nothing Changed Everything

Now you have two options for giving the Gift of Nothing. This one in a box, and this one in a book. Seinfeldia: How a Show About Nothing Changed Everything tells the story of what some say is the best, and others the worst, sitcom ever made.

Bob's Burgers has always taught us a lot about life, family, and music. Now the animated juggernaut is jumping off screen to teach us more about an equally important key to Belcher happiness: burgers.

The Bob's Burgers Burger Book: Real Recipes for Joke Burgers pulls 75 cartoon recipes for Burgers of the Day from the show's script and lays them out as detailed, illustrated, actually edible DIYs. Each burger in the cookbook was taken directly from a Bob's Burgers episode, with the season, episode number, and title are all listed under the burger header. Some inclusions: "Bleu is the Warmest Cheese Burger;" the "Bruschetta-Bout-It Burger;" the "Sweaty Palms Burger;" and the "I Know Why the Cajun Burger Sings Burger."

...Essays on the TV Series and Town That Are Part of Us All. The Simpsons, founder of primetime animation and intelligent adults taking pride in watching cartoons, is dissing, drinking, and social commenting towards its 30th anniversary in 2019. The Simpsons' Beloved Springfield is a new collection of essays that delves into how The Simpsons reflects our real, everyday lives in America. That's in terms of gender roles, music, death, food politics, science and religion, anxiety, and friendship, amongst others.

So I guess it's less a reminiscent homage of bloopers and stories and interviews, and more a primetime book for intelligent adults who take pride in watching cartoons.

Game of Thrones: The Storyboards

Game of Thrones storyboard artist William Simpson is releasing the, uh, aptly titled Game of Thrones: The Storyboards (good thing he's not the story writer) at the end of May 2019. Presumably in conjunction with the show's finale, or at least the lead-up to it.

The book is an HBO-official collection of deluxe Game of Thrones storyboard art, featuring behind-the-scenes visuals of pivotal times in the plot, as well as early conceptual series art.

Downton Abbey, like The Wire, is another show I never made it through. I think I covered 5 or 6 episodes though because I kept thinking this one would be it. The one where something happened.

Downton Abbey: A Celebration double subtitles itself The Official Companion to All Six Seasons with (The World of Downton Abbey) tacked on in parentheses for good measure. Authored by Jessica Fellowes, with forward by showrunner Julian Fellowes, the book allows Downton Abbey fans to relive the "evocative world of romance, intrigue, drama and tradition" with the Crawley family.

The World of Vikings

This official Vikings series companion book gives readers insight into the real history of its Norse hero Ragnar Lothbrok, and the vikings of the past, along with behind-the-scenes stories of the History Channel's top-rated show. Shipbuilding and navigation, Norse culture and religion, and the first encounters between Viking warriors and the kings of England and France are all included.

A celebration of 50 years of Trekkin', The Star Trek Book: Strange New Worlds Boldly Explained goes into the science of Star Trek and its influence on IRL technology, such as - oh boy! - my beloved flip phone!

Photos and infographics abound, as does coverage of all your favorite Starfleet characters, including those from the original Star Trek, The Next Generation, Deep Space Nine, Voyager, and Enterprise.