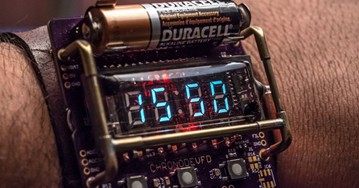 Wearing a watch gives you one less reason to check your phone. Wearing a watch that costs less than $100 gives you one less reason to ask your girlfriend if she could maybe pick up dinner. For the next 6 months. Here are my picks for the 10 Best Men's Watches Under $100. I've selected them for their aesthetics, versatility, wearer satisfaction, and, uh, the fact that they cost under $100.

(Note: All items' prices are listed as they were at printing. Prices are subject to change.)

Casio G-Shock Sport Watch $73. A flashy face and XL case. This watch is big on bells & whistles and big on...bigness. The rugged design features both analog and digital displays, plus options for displaying World Time in 29 time zones, 5 alarms, a stopwatch, a countdown timer, 12- and 24-hour formats, and day/date/month information. Hopefully the black resin band is strong enough to hold the G-Shock's bravado.

Citizen BF0580-06E Analog Display Black Watch $80. I found out a couple years ago that children are no longer taught to read analog clock faces in school because they all have cell phones and devices with digital readouts now. Can you believe that? I also heard they don't learn how to tie their shoelaces due to the prevalence of Velcro, and are encouraged to pick their noses thanks to the advent of Purel. For the analog die-hards...or just those old enough to know how to read the big hand and little hand...Citizen's timepiece is highly rated for its quality, classy aesthetic, and comfortable wear. Powered by a standard Japanese Quartz battery as opposed to Citizen's trademark Eco-Drive tech (see Nighthawk), it also comes in at a much lower price point.

MVMT Watches Black Face with Tan Leather Strap $95. While I'm not so sure about the political correctness of this MVMT watch's name, I am 100% behind the company's ethos of creating a line that cuts out the brand inflation and retail markup of other popular timepieces. This contemporary and minimalist design aims for 3 things: 1) Both casual and professional wear; 2) Incorporation of high-quality materials; and 3) A price tag of less than half what MVMT competitors charge.

Casio Calculator Watch $16. Time, date, 1/100 second stopwatch, and basic mathematical functions--what more does one need to wade through the murky waters of life? Also, it looks like it came straight to 2015 from an Anthony Michael Hall movie, so bonus points awarded there.

Timex Expedition Scout Watch $36. Simple, cheap, probably not stylin' enough for the compliments to come rolling in, but decent enough looking that it's not going to bomb your job interview like this watch would. Bonus: lack of flash and low cost significantly decrease the likelihood that a petty thief is going to lift it from your wrist during your trip to Italy this summer. And even if they do, eh, you're only out a coupla twenties.

Stuhrling Original Aviator 699 Watch. $85. I personally would be more than happy to accept this watch in box with a bow around it. It's clean-looking without being boring, and has a swell numbers/day/date layout that suggests whomever designed it has some primetime organizational skills.

Kenneth Cole Rock Out Watch $85. Stainless Steel with a genuine diamond hour marker and mineral crystal dial window. Despite its name, I think this Kenneth Cole model would actually be better for the office or a nice dinner than it would for rocking out.

Bulova Silver Dial Dress Watch $81. Another watch for your spruced-up events and endeavors. It's a clean, unassuming mid-size that gets the job done with a 35mm stainless steel case, silver dial, mountain pointed baton hands, and black leather strap.

Pebble Smartwatch $85 to $100. Come on. With all the tech dressing up these pages like a Willie Wonka hot fudge sundae, I had to include at least one watch crowned "smart". And in my opinion, there's no better model to carry the burden than the original of the e-paper timepieces, Pebble. A minimalist design complements handy Pebble functions, the most basic of which include silently vibrating to alert wearers of calls and messages (just shake your wrist to make it stop), caller ID functions, and numerous changeable watch faces. You'll have a watch theme to match your every mood, which is almost as good as having a car or girl or flavor of Doritos to match your every mood. Almost.

ChronodeVFD: Cyberpunk Wristwatch Or...if you'd like to save your hard earned cash and make one yourself, take a few lessons from John Gineer who made this beauty built around the IVL2-7/5 VFD display tube (10 for $28). He gives detailed directions on materials and tools needed to build the watch along with step by step instructions. If you're just looking for the band, you can find it here on Amazon.

A smartwatch you need charge only by...doing smartwatch-y things with it? Sequent's SolarCharger Smartwatch is a timepiece that also monitors your activity, sleep, and heart rate, and can potentially do it all in perpetuity...

Nyx describes their IN16 Nixie Tube Watch as a "retro-looking futuristic...trend that never fades." Having been at my Dudely duties now for 10 years, I have to say, I completely agree. What is it about these Cold-War-era...

URWERK certainly likes their sci-fi. Not just in designing the the Aggregat Odyssey, a limited edition take on their retro-futuristic UR-112 Watch, but also in describing it. Featuring a new titanium and steel fuselage...