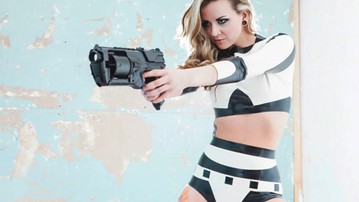 May the other 4th be with you. You know, the angry, greedy, aggressive, jealous, megalomanic Dark Side kind. OK, maybe not with you as in inside you, all you kooky Boga Siths out there who can just simmer down before the fit hits the galactic shan, but with you as in, like, on your shelves as collector's items. In your kitchen as funky gadgets. Stretched latex-taut across your voluptuous...uh. If you're looking at the same picture I am, you get the picture.

In honor of Star Wars Day 2022, I'm honoring the other side of the Light Side. Showing some Dark Side pride with these 12 Star Wars gifts for proud Siths.

But not literal Siths, dudes. Put those pointy-ass red lightsabers and E-11 Blaster Rifles that can't hit shit anyway down.

Note: All Sith-centric Star Wars gifts are priced as they were at printing on April 29, 2022. Pricing, and availability, are subject to change.

I wouldn't bet a single credit that Darth Vader could even float in that armor, much less engage in a competitive lightsaber battle wearing it in the water. But the 2020s are nothing if not a decade of surprises, so here we are. Donut Float Dark Lord of the Sith, ready to destroy pool time.

What makes this Star Wars parody print stand out to me is its more classic artistic style, and the everyday task Bucket Art has chosen for their galactic subjects to engage in.

Imperial Baking Party gathers Darth Vader, Boba Fett, and The Emperor in the kitchen to collaborate on some lattice-topped fruit pies. Check out the last guy's footwear. And don't forget the fridge.

How do you declare a thumb war in Wookieespeak? Yeah, that's right, 1, 2, 3, Raaawwwrrr! Time to suit up, buckle down, and probably tie one on, Cornelius, because I challenge you to a lightsaber duel. From the knuckles down.

I call the red one. Obviously.

I'd really like one of these Star Wars Death Star 1oz Gold Coins, but I'm pretty sure buying one would be the death of me. Either via superlaser to the face, or fist to the face if my wife found out I spent $2,900 on a Death Star 1oz gold Coin. She-Ra: Princess of Power has sensible spending habits and a mean right hook.

Shoshanni Ani custom creates her latex Stormtrooper designs according to client measurements, which pretty much guarantee to grant a husband / job / diamonds / babies / perfect hair / ageless skin / whatever it is ladies want these days to any lady who wears them. So definitely worth the investment.

Luuuuuke! I boil your water! The Darth Vader tea kettle would be better if it were high-speed electric, and even better than that if it were powered by Bogan, but the sturdy vessel for hot beverage fixin' is still pretty cool as an old fashioned stovetop model.

Lord Vader, disciple of the Dark Side and the Darjeeling, is made of sturdy stainless steel forged into a sleek, modern design. The tea kettle gives a clear nod to the Star Wars universe with its helmet shape and lightsaber handle, but isn't over-the-top geeky with carved-out mask features or heavy breathing sound effects leading up to the whistle at boiling point.

Though that second one would actually be kinda cool.

Regal Robot is a studio home to several sweet custom Star Wars furniture designs. Remember the Millennium Falcon Asteroid Coffee Table? The Robot's latest creation gives all the aspiring Dark Side dictators out there the chance to sit on an Emperor's throne; the Star Wars Emperor Throne Armchair brings to wishlists Palpatine's imposing butt cradler from Return of the Jedi.

Swathe your keyboard in the emblems and Aurebesh of the Empire with this officially licensed Star Wars Galactic Empire DSA Keycap Set. Keycaps are available in straight Aurebesh for the hardcore bilinguals, or Aurebesh with English Sublegends for those of us not quite there yet.

Galactic Empire sets come with 157 PBT dye-sublimated keycaps, including 8 novelty caps with designs such as Death Stars, stormtroopers, and Lord Vader himself to make it clear which side you're on (i.e., the one with cookies.)

Marry me and come to the Dark Side! Come on, ladies, even in you're not into Darth Vader or Star Wars, you gotta indulge any man who presents you with a Vader helmet engagement ring. If for no other reason than the license it will give you to go around wheezing, Luuuke! I am your stepmother! Come on, come awwwwn.

This Lightsaber Willy Warmer might be the finest expression of Grandmas's yarn I ever saw. Not a bad tribute to Star Wars either, presuming you've mastered the dark side of the Force well enough to wield this saber once it's fired up. Better ditch the Uh-huh! and Oh baby! and start practicing your Swish! and Buzz!

Etsy shop Jane Crochet Stuff lovingly creates each Lightsaber Willy Warmer - and points out the pieces also know as a peter heater or cock sock, JFYI - in standard dimensions of 6" long x 2" wide at the energy blade (i.e., cock) and total length of 8.75" including the hilt (i.e., balls). However, they are happy to make a smaller or larger lightsaber by request.

Another one for the sexy, Sithy ladies! Musterbrand's Star Wars Sith Parka takes design inspiration from all of Star Wars' Beings in Black. It is just as much a wearable cold weather coat as it is a costume-y tribute to the franchise. The parka's asymmetric design and pin-tuck details on the sleeves and hood make for a futuristic goth-hipster aesthetic, while an imperial insignia print on the red satin lining and a pair of interchangeable imperial design silicon badges keep the coat true to the Dark Side.

I know it doesn't sound very Dark Side of me, but I'd much rather use a Darth Vader lightsaber to make my morning smoothie than duel at a cosplay convention. It's just so much more practical. The Star Wars Vader Lightsaber Immersion Blender pairs a replica hilt base with the Dark Lord's trademark red blade, now serving as the blending arm. Use the blender as a handheld mixer for smoothies and soups, mashed potatoes, or even mixed drinks.

If you're ready to finish what Lord Vader started, your saber awaits. Cosplay and collectors' darling Saberforge continues to produce some of the best and baddest lightsaber replicas out there. In honor of Star Wars:...

How does a Dark Lord of the Sith stay warm and dry in the winter without sacrificing his menacing appearance? He calls musterbrand (who then calls a bunch of attorneys for licensing approval). Taking design inspiration...

It's official: you can now swathe your keyboard in the emblems and Aurebesh of the Empire with this officially licensed Star Wars Galactic Empire DSA Keycap Set. Well, you can get in line to do it anyway. Preorders for...

I wonder if Bandit9's Dark Side has cookies. Only 9 people on earth will truly find out, as that's the number of bikes the Saigon-based custom motorcycle shop will build as part of this very limited edition...

This collection of Star Wars Rugs from Ruggable is...illuminating. I mean, the Dark side in black-and-white damask. TIE Fighters in abstract houndstooth. The Empire Strikes Back in blue toile! I'm finally starting to...

Forget the moral conundrum, jumping between the Light Side and the Dark Side should be like flipping a switch. Luke's making pumpkin spice muffins? Click. Light's on. The Force is with me. It's pulling me out of bed and...

Awww, man. The Darth Vader chair is exactly what I've been looking for to replace my busted Xbox lounger (note: some chairs are not meant to be used as trampolines when you get excited during CS. RIP my faux leather friend.)...

I know it doesn't sound very Dark Side of me, but I'd much rather use a Darth Vader lightsaber to make my morning smoothie than duel at a cosplay convention. It's just so much more practical. The Star Wars Vader Lightsaber...