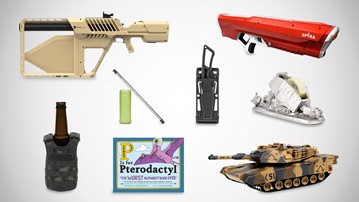 Dude's most popular products of 2018 followed some very surprising trends. Weapons. Dinosaurs. Survival gear. Star Wars. Sexy time. Crazy, right? It's almost like that year when the most popular name for parents to give their baby boys was James.

Ah well. Nobody says dudes' tastes are required to change; we like what we like. And the cool thing about Dude's most popular products of 2018 is that they prove how many crafty kids and clever devils and evil geniuses there are out there who are constantly able to make new, creative, coveted, and Dude-worthy gifts that revolve around the same handful of genres and themes.

So, in no particular order, he's the shortlist of items that have proven to be Dude's most popular products of 2018.

Note: Product prices are listed as they were at printing. Prices are subject to change.

You have some T-Rex decisions to make: do you want the costume with a built-in sound box in the gloves, or do you want to make your own Tyrannosaurus sounds? This fan-and-battery-operated suit comes in both versions.

The T-Rex costume has an inseam of less than 33", which should fit adults up to 6' tall, with a 42 to 44 chest an 34 to 36 inseam. There's a vision window at the neck of the dinosaur so you can see all the havoc you're wreaking, and stuff you're getting yelled at for stomping on or knocking over, while wearing it.

Full Body Armors' superhero and video game character costume replicas will secure your cosplay convention credibility, and make all of your Sundays Fundays. The made-to-measure suits transform wearers, from head to toe, into the likes of Iron Man, Batman, Deadpool, and Halo 5's Master Chief.

Full Body Armor suits are legit mashups of fantasy and real life in pretty much every way but their ability to fight evil and crush enemies. On that front, these are costumes only, made from 3D-printed and CNC-machined materials such as PU plastic, ABS plastic, and aluminum alloy frameworks. In addition to enabling Full Body Armor to custom fit every piece of the suit, from head to bicep to calf, to your body, these "textiles" also keep the weight down. Most of the costume replicas weigh around 15 pounds.

Radio-controlled tanks that fire actual BBs? Glass sliding doors beware. These RC tanks, which I don't even know how they're allowed really in this day and age, but I'm glad they are, are modeled after some of the most iconic tanks utilized in the United States' most iconic wars.

Who doesn't long to be poppin' zits like a G6? Look no further than the Pop It Pal Pimple Popping Simulator. Even if the teen acne days are behind you, and most of those juicy back zits juuust out of reach, this fleshy, pus-filled brick brings the equal parts gross and gratifying act of bursting a dermatological volcano to everyone. Poise your pointer fingers, amp up your bodily fluid fascination, and get ready to Pop It Pal.

A fine choice from a trusted purveyor at a reasonable price. Maybe Gerber's Ghoststrike isn't the coolest wearable knife you'll ever own, but the blade does come with a modular sheath system, so if concealed carry is what you're going for, you'll have an easy time securing it to your belt, and the pleasure of wearing your shirt untucked to keep it hidden.

What's better than a magic carpet ride? A big magical unicorn pool float. A giant pink flamingo party raft. A huge and handsome floating peacock island. All big enough to bob you and 5 of your best buds around the lake or ocean all day (all weekend! all summer!) long!

I bet if Juvenile saw these 3D Unicorn Underwear from Knicker Rocker he would think twice before telling the ladies to back that azz up. The panties are quite the statement piece, combining dreamy, fantastical unicorns with sexy lingerie with a definitive warning of the consequences for making any uninvited advancements on the lady wearing them. Skewered by a unicorn. A rough way to go.

The Le Koroc tiny house boat is exactly how it sounds: a tiny house built on a boat. More specifically, it's a single-structure piece of construction, assembled with laminated white cedar beams and ultralight plywood, set atop three 50 / 52H32 marine grade aluminum / magnesium alloy tubes with 4' sealed chambers. When asked how it feels about this new, water-based arrangement, the house said, "I'm on a boat motherf**ker!"

It's military-strength protection for your beer! These tactical vest beer koozies, complete with MOLLE attachments for toothpicks, cigs, and lime wedges, might be pretty cheesy, but the cheddar they're oozing out of their adjustable stitched shoulder straps is exactly why they'd make a fine gift for Dad, or groomsmen's gift for your boys. Dad loves him some cheese. And given what you've seen so far of your fiancee's bridesmaids, your boys are gonna need extra protection at the reception.

Want to stick it to the Empire? Take down their AT-ATs with this secret weapon: a roll of tape. As my mama always told me when she was patching my coats and jeans and open wounds, never underestimate the power of a good adhesive.

Oh you remember this from the movie. Even the non-ladies amongst you. Malcolm goes from attacked by a T-Rex to recovering like Burt Reynolds on a bearskin rug in 2 scenes flat.

Already preserved for posterity as a meme, Sideshow is now giving Malcolm / Goldblum fans the opportunity to preserve the scene in 3D, as a 1:4 scale limited edition statue. And like all of their creations, Ian Malcolm is detailed down to the specks of blood on his (strapping!) chest and (tellingly large!) hands.

Nothing like the thought of pelting my friend Cornelius with a Spyra One water bullet to get me amped up on this fine afternoon! Well, that and tacos.

The Spyra One calls itself a next-gen water gun, a battle toy that replaces the streaming shots of other water guns with a powerful 30mL "water bullet" capable of hitting targets with balls-H2On accuracy from up to 25' feet away.

Well, you probably give a little more than zero Fs if you're going to the trouble of flipping a coin to make the decision. But if your wife asks you whether you'd prefer new cloth napkins in sage green or seafoam green, haul out one of these Zero Fs Given decision maker coins to help make the call, and you'll definitely make a point while you're at it.

If I had a gaping laceration on my leg, and someone handed me a ZipStitch kit and told me my options were to treat myself for free, or go to the hospital and spend $500 on stitches, I'm pretty sure I'd pick...passing out at the sight of my own gushing blood and insides, and hoping a steady hand nearby was interested in playing doctor and saving me $500.

Each "zipper" in this self-treatment kit consists of 4 stacked closures secured inside a translucent bandage-y thing with an adhesive backing. You can place a single ZipStitch over an open wound up to 1-1/2" long. Once in place, pull on the eye handle ends of each closure to tighten it, and pull your skin hole shut. If your laceration is larger than 1-1/2", apply multiple ZipStitches.

P Is for Pterodactyl: The Worst Alphabet Book Ever

In P Is for Pterodactyl: The Worst Alphabet Book Ever, Raj Halder and Chris Carpenter take a jab or two (or 26) at the English language, pairing the letters of the alphabet with words that defy the typical intent of alphabet books as teaching tools for our kids. "P is for peeech. Puh, puh, peach. P." But! "P is also for...ter-a-dac-til. Tuh, tuh, pterodactyl." Huh?

The DroneGun Tactical provides a safe countermeasure against a wide range of drone models. Relying on Spaceballs-like tech, instead of ready, aim, fire, it's ready, aim...jam! The Dronegun allows for a controlled management of drone payloads such as explosives (or aerial neighborhood photos) with no damage to common drone models or surrounding environment.

Not for Sale in the US ➠ Drone Shield

In an effort to curb the waste, and also to make a piece of EDC that is "totally badass," Emma Cohen, Miles Pepper, and Jessica Girard created The Final Straw. Made of triple-jointed stainless steel, The Final Straw folds to fit into a keychain-sized recycled ABS carrier for access whenever you need it. The straw's interior tubing material is medical-grade TPE for drinking as safe for you as a reusable straw is for the earth.

Dude's Must See Products for January 2023

Dude's Must See Products for November 2022

Dude's must see products for November 2022 say, "Let the holiday shopping, and the holiday gift guides, begin!" What I have here is largely a roundup of roundups - all my best gift guides for the month of November consolidated...

Italian in both slick aesthetics and siesta-time concept, I exaggerate not when I say the HiCan high fidelity canopy bed will persuade its occupants never to leave its ultra-modern, four-poster confines. HiCan designer...

Dude's Must See Products for July 2022

No fireworks in Dude's must see products for July 2022, but there is an ultra-loud disturbance of the peace that will probably give your dog a fear complex in the Screaming Aztec Death Whistle, pictured above. And if...

Dude's Must See Products for August 2022

Ahhh, August. The month leading up to Halloween. No wonder so many of Dude's must see products were...wait a minute. Halloween is in October, right? And October doesn't come after August...right? Geez. I ran at least...