Dude's Must See Products for October 2021 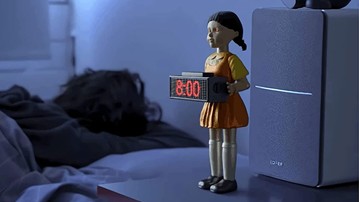 Yep, the Ark Lite Nebula Projector looks like some real Jodie Foster Contact material. Touch it and you'll almost certainly have a moving experience on an idyllic beach with an alien in the body of a beloved dead relative that everyone will subsequently tell you is a result of your imagination / your mama dropping you on your head as a baby.

They won't mention the 18 hours of static your body cam recorded though.

Another LED laser projector from BlissLights, the Ark Lite beams stunning illusions of celestial phenomena onto your ceiling to set the mood for parties, game nights, date nights, or some self-care in the bathtub.

Despite the bleak, dystopian vibe emanating from Squid Game's actual story and content, the costumes you can build from these Squid Game masks and either head-to-toe black, or a pink jumpsuit, made Netflix's Korean survival drama a goldmine of some of the easiest, coziest, and most COVID-friendly ideas for Halloween.

Ready to go down like the Titanic? Then try your hand at building LEGO's 9,090-piece, 1:20 scale Titanic replica. They call the 53" long working model a "colossal achievement," being the largest LEGO set created to date, but consider they said the same thing about the Titanic ship itself, and look what happened there.

Released on November 1, 2021, the LEGO Titanic model features multiple cross-sections of the ocean liner you can split apart to see interior spaces, such as the grand staircase and smoking lounge, as well as to tinker with moving pieces. Propellers, for example, spin to activate piston engines inside. The LEGO Titanic's anchor also raises to adjust the tension line between masts.

I'm sure this Dog Harness Hammock is very useful for nail trimming and other grooming tasks, maybe administering medicine or shoving pills down your dog's throat too. Any pet endeavor that requires your dog to remain relatively still, in one place, and easily accessible to you. It's got the same perfectly practical application as The Baby Hanger.

And also like The Baby Hanger, the Dog Harness Hammock has me laughing like a hyena every time I look at it, and saying to myself, "You poor bastard. What did they do to you?"

Jetson calls their Jetson ONE "a commercially available personal electric aerial vehicle that you can own and fly." For our purposes, we'll call it a human-totin' drone.

The Jetson ONE began as Jetson's mission to make spontaneous flight more accessible to individuals. They completed a prototype of their single-rider high-flyer in 2018, and have now sold out of their first batch of completed consumer-friendly models, with 12 Jetson ONEs headed to buyers around the world sometime in 2022. (You can even see where in the world each of the buyers are located at the end of the Jetson ONE webpage.)

A falcon, a dragonfly, and a hummingbird walk into a bar. Actually, they slice into a bar. A big fat Snickers bar. And the Falcon, the Dragonfly, and the Hummingbird, all members of TITANER's Titanium Folding Pocket Knife, either eliminate its wrapper so you can chow on down, or cut the Snickers in half because your wife insists on sharing, and you know she'll eat more than her fair share if you try passing it back and forth.

TITANER's Titanium Folding Pocket Knives are tiny, featherweight pieces of EDC made of Grade 5 Titanium, and fitted with #11 carbon steel scalpel blades. The 3 "fly" styles (<--'cause they're all named after creatures with wings) differ only in aesthetics; each is 5.5" long when opened, 3.1" closed, and weighs under 1 ounce.

The Haxon AirFan mounts over your bed to create airflow and cool you off at night, yes, but the smart piece of tech also comes with 19 other built-in functions and features to help improve your quality of sleep. Plus the quality of any other activities you enjoy doing in bed.

While the Nokia 6310 has always been a brick phone rather than a flip phone - and you know how I love me some flip phones - Nokia's 2021 upgraded rerelease of this mobile classic still sends my heart aflutter. Dudes, it has buttons! Real, tactile buttons! And, according to Nokia, they are bigger buttons, which is even better, because Nokia decided to put out the 2021 edition in honor of the 6310 brick phone's 20th anniversary. Which makes it 20 years old this year. Which makes this dude, and everyone else who will go glassy-eyed nostalgic over the new Nokia 6310, 20 years older.

I bet we're all grateful for bigger buttons.

The ultra-realistic Orangutan Costume looks like an outstanding choice for Halloween. Or, like, life, if you're craving something different. Because, as they say, in today's world, if you're tired of being a software engineer, you can go back to school and completely change your career. Become a lawyer. Become a chef. Become a nurse. The same is true here. If you're tired of being a human, you can go to the internet and completely change your species. Become a shark. Become Groot. And, courtesy of MCS Dino, become an orangutan.

Or at least a human in an ultra-realistic Shark / Groo / Orangutan Costume.
$7,980 ➠ Etsy

Funny, functional, dare I say Autoblow's take on the decoy safe is ingenious? Dirty Santa is lickin' his chops for this season's gift exchange.

I should have found 13 cool products in orange & black to make this compilation even more true to the Halloween spirit I claim it embodies - or rather, disembodies. But I'm lazy, so you get 12.

To my credit, all of the orange & black products I picked are at least original enough not to be Halloween related, and there isn't a pumpkin or, worse, a pumpkin spice anything to be found.

Hints: 1) It doesn't let things happen, it makes them happen; 2) It's here to help you wake it up before you go-go; 3) It will give you a wave when it's ready.

Red light, green light, wake up! Or prepare for the Squid Game Doll Shooting Alarm Clock to eliminate you. ... OK, she'll just pelt you with a foam bullet, but still. This piece of Squid Game merch might be the creepiest yet.

Set the alarm on the Red Light, Green Light Doll Alarm Clock, and when your rise-and-shine hour hits, she starts belting the Korean kiddie song from the Squid Game TV series. And then. She turns her loaded head towards your sleepy one, opens her mouth, and FIRES!

Pretty neat, 'eh? In his latest piece of nifty home decor / functional art, the Summit Sofa, Stelios Mousarris fits modular cushions into a wall-mounted frame to produce a 3D piece of art depicting abstract mountains in various shades of blue. And he does this so that you can un-fit them from the frame, and pile them on the floor in any configuration your heart desires to create a sofa, chair, play area for your kids, or play area for yourself and a partner to explore sex positions you never thought possible.

Be careful, the 3D Printed Vaginasaur definitely eats meat. Etsy shop 10th Dimension 3D calls this prehistoric poon print the "Dino Pussy" and the "Cuntasaurus," but I feel like "Vaginasaur" rolls off the tongue best.

Though really, any of them roll off the tongue pretty well.

Dude's Must See Products for September 2021

Dude's must see products for September 2021 have love on the brain. Love of Fall, that is. And in this case, Fall is about 75% Halloween, and 25% cozying up, cleaning up, and / or decking out your home, garage, and any...

Dude's Must See Products for November 2021

Rather than Dude's must see products for November 2021, I should say Dude's must see gift guides for 2021. With the holidays upon us, I compiled over a dozen different themed buyer's guides to help you fulfill your gift...

Dude's Must See Products for February 2021

Dude's must see products for February 2021 reflected a month of looooove. Lovely animal rings in every species from hippos to pugs. Brotherly love between Darth Vader, Boba Fett, and The Emperor, as they spend some quality...