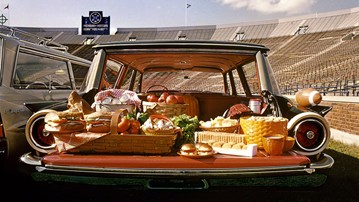 While the most essential pieces of tailgating gear might be beer and brats, I know no one's going overlook or forget those. Same goes for your favorite football team's jerseys, hats, and onesies, and your recipe for Super Bowl Champion chili. The grill and cooler are kinda no-brainers too.

So my picks for essential tailgating gear are an attempt to suggest a few items you hadn't thought of, a few new takes on classics, and maybe a few ridiculous things you've never seen before.

Note: Tailgating gear prices are listed as they were at printing. Prices are subject to change.

Collapsible legs and assembly-free setup make the Tailgater a viable option for grill-outs at the lake or park, longer camping trips, RV treks, and of course, tailgates. The Tailgater has a dual cooking surface with independently controlled burners, 1 stainless steel H tube and 1 cast iron. The H tube outputs up to 15,000 BTUs, and the cast iron 20,000. Use them to cook different styles of grub, such as chili in the stock pot, and corn cakes on the griddle, at the same time.

A grill / stove combo for making tailgating life easier with bells (pressure regulator) and whistles (matchless InstaStart ignition.) It has 2 x 10,000 BTU burners and PerfectFlow technology to regulate the pressure of your propane tank's output. This encourages a consistent pump of fuel that Coleman says will return consistent cooking performance. The grill's InstaStart button provides similar ease and dependability when firing it up. Side panels double as wind blockers when pressed up and food trays when folded down.

This cooker box collapses and folds into a briefcase during travel, and then smokes out fresh fish, meat, and veggies when set up around the campfire. Or in the parking lot. Ziv's smoker is compatible with any heat source, including an open fire, a gas stove, or a BBQ.

YETI extends its promise of ruggedness and superior performance to 3 shoulder-schleppable sizes of the Hopper bag series. 20-, 30-, and 40-liter coolers are made of a DryHide Shell that is puncture-resistant, leak-proof, and lined with an mildew-resistant anti-microbial interior. Hopper sides have 1" of ColdCell insulation, and the bottom 1.5" that, along with a watertight HydroLok zipper, delivers YETI's trademark longterm cooling without leakage. Cooler exteriors are made of materials that come from the likes of hazmat suits and whitewater rafts, so they'll be stand up to all the bumps, drops, tosses, fish guts, and projectile vomits after one too many that come their way.

For scale gauging, the YETI Hopper 30 has capacity for 24 cans of beer or 30 pounds of ice.

Maybe you're hitting the tailgate by foot or bike. Or maybe you just don't want to mess with a cumbersome cubical cooler. As long as you're confident you won't consume more than 10 cans or 6 bottles before the game starts, the BevPod is a slim 'n' swell choice for you.

BevPod's calculated design condenses this cooler to a mere 3" thick (and 13" long x 10.5" wide). Its chill comes from an equally efficient reusable ice pack that nestles drinks and snacks inside. Combined with an insulating, water-resistant outer body, a zipped-up BevPod can keep its contents cold for up to 8 hours in 90-degree heat.

This modular bottle / can koozie combo is a vacuum insulated, double walled stainless steel chiller. Its cylindrical base keeps beer or soda cans cold for hours, while the addition of a second tier over the neck of a bottle extends the insulation to the top of your glass vessel. The Frosty Beer 2 Go's "cap" on top seals the koozie's contents fully, plus serves as a beer bottle cap remover.

The Bevometer is terrific for tailgating because it will let you know this is actually your 8th can of Vitamin R (that's Rainier Beer - you're welcome, Seahawks fans) in 2 hours of prefunking when you thought it was just your 4th. And, the Bevometer can prove with its "This Time" and "Lifetime" digital tracking gadgetry that you have, in fact, out-drunk your friend Cornelius. Responsible statistician or evil instigator: choose your own adventure with this beverage-counting koozie.

The day has come. Never again will we be forced to set down either our beers or our plates before administering a high five during tailgates, backyard BBQs, and the Journey featuring Special Guests Foreigner and Night Ranger concert. The Go Plate, undiscriminating on top of being the answer to my palm-poundin' prayers, accepts the heads of just about any beer vessel - from bottles to cans to Red Solo Cups - in its hollowed out center cone. With plenty of space to spare for a healthy pile of hot wings and deluxe nachos in the surrounding food tunnel.

Kelty wants to help all the lovers out there get low. Calling it "the throne among camp chairs," this double wide's steel frame is covered in quilted 600D polyester and features an adjustable arm rest, multiple back rest positions, an insulated beverage holder, and roll tote storage. Measurements are 44" wide x 23.5" deep x 31.5" tall; seat height is 13-1/2".

This propane-driven indoor / outdoor radiant heater outputs 4,000 to 9,000 BTUs, enough to warm 200 square feet of huddlers (or just the one heat hog who stands right in front of its grille). Mr. Heater is also clean-burning and nearly 100% efficient during use, plus has an auto-shutoff feature that activates if the heater is tipped over, if its pilot light goes out, or if it detects low oxygen levels.

Maker Soundboks combines custom-selected speaker parts with class-D amps to produce a Loudest Portable Speaker volume of up to 119dB, and a range of 100 yards. Add to that Bluetooth compatibility and a 50-hour battery life, and I'd say today's rockin' tailgaters - not to mention aspiring Cusacks looking to profess their love - have found their boombox upgrade.

Tailgate Beer Pong redefines the tailgate party, bringing the celebration not just to parking lots before the big game, but anywhere you have a Ford F150 truck tailgate. The Penda C86-TPX Tailgate Pong affixes to the bed doors of all F150s year 2004 and later, installing in less than 10 minutes as a replacement for other formed tailgates or over most spray-on coatings. The game is made of heavy duty HDPE so it still performs like a "truck part" when you're not playing beer pong.

When your pre-football prefunk merits some funky footing. This outdoor football game built around a pair of packable lawn chairs. Slip the QB54 seat covers off their back fame and replace them with the game's yellow goalposts. Pull the flaps forward to reveal to reveal your "touchdown baskets" (that, ironically, look like basketball nets) under the chairs' butt cradles. Then set up the chair goals facing one another about 40' apart, and cue Hank Williams Jr. Are you ready for some football?

What kind of "facilities" does your tailgate have? None? A single Honey Pot with a line down the parking lot? TravelJohn Disposable Urinals give peace of mind to anyone who has experienced knees knocking, thighs constricting, and hands holding on tight. Take relief in knowing you can now take a whizz nearly anywhere!

The personal pee pouches, sold here as a set of 6, come with an adapter that makes them unisex and open for business to anyone, whether sitting down or standing. A spill guard even prevents back flow during use.

Mmmm, smells like brats, burgers, beer, and...margaritas? Thanks be to the TailGator, a blender with cajones the size of a 25cc Poulan 2-stroke, 2 1/2 horsepower gas engine. Surprisingly light at only 10 pounds, the TailGator container has a capacity of 48 ounces, and blend time runs around 15 seconds to lump-free frozen cocktails. The engine fires 6,500 margaritas per gallon of fuel, and its fuel tank tops off at 11 ounces. Front mounted controls include a primer, choke, and kill switch, and the blender runs with infinitely variable RPM, throttle, and speed control.

Ahhh, summertime. Smells like freshly cut...margaritas. Thanks to the TailGator, a blender with cajones the size of a 25cc Poulan 2-stroke, 2 1/2 horsepower gas engine. It's not a new product - or the only one of its...

Crushing an empty beer can on your head may be a real crowd-pleaser, but if you're unsuccessful...enjoy the memes and viral videos. And the concussion. But stomping on empty cans to crush them, now that has a much higher...

Obviously the most important element of tailgating is drinking. No one ever forgets to bring beer to the tailgate. Or the picnic. Or the post-outdoor-adventure celebration. We do, however, sometimes forget chairs. Or...

Holy smokes...miester! A Weber, a hole saw, and a coupla Bud Light Limes on a Saturday afternoon, and my Bru-BQ Wayne kettle grill becomes a Bat-Smoker too! The Smokemiester BBQ Smoker converts any covered grill into...

This briefcase is smokin' hot! The NOMAD grill & smoker packs a charcoal BBQ grill and smoker into a pretty decent lookin', and ultra-portable 20.5" x 13.5" x 9.5" case. Open the carrier up to expose 425 square inches...

Freezing weather finally arrived? No matter. You can still Mozy on over to the tailgate, the campsite, the backyard BBQ that won't let summer go in cozy comfort with the Mozy leg jacket. Nope, it's not a fancy way of...

Solo Stove's latest release, the Bonfire backyard firepit, is one of the hottest campaigns on Kickstarter right now. At printing it was flaming with over $200,000 in backer pledges, smoking its $15,000 funding goal and...

Bonus points, Wilson, for blessing the Dearborn Tailgater Pant with an elastic waist. You know exactly what kind and quantity of food and drink sports fans will be partaking in while wearing them. Whether watching the...

If you're off-gridding, off-roading, road tripping, or just hanging next to a 12/24V DC power supply this summer, save the ice for your drinks and swap out your cooler for one of Alpicool's portable refrigerator / freezer...

The FireCel Plus is a 3-in-1 hand warmer, flashlight, and charger from Celestron, who I know as "the expensive telescope people." And indeed, a multi-tool that will toast your frigid fingers, power up your dying phone...

Grilling is about to get personal...ized. The Disc-It is a steel grill with a wok-like top and hundreds of options for artistic customization. Buyers can choose from Disc-It's archive of designs or create their own to...