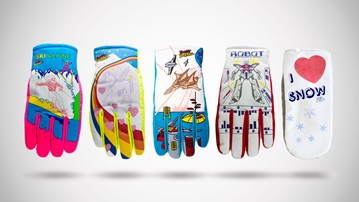 A little Hot Tub Time Machine mixed with a little 6-year-old you, and voila! Freezy Freakies retro color-changing snow gloves are back. Even better, these badass winter warmers of the 80s have grown with you, but in size only. The gloves feature the bitchin' scenes and cold-activated images you remember from your childhood, only bigger. Big enough to fit man hands.

Pew, pew, pew. When your teeth start chattering, the lasers start firing, and the fighter jet fills in to battle back. Gotta love the 80s' perspective on an intergalactic fight scene.

If this were still the 80s I'd say Freezy Freakies should have included Tom Cruise's face in the fighter jet. But since it's the 2010s and we know a lot more about where Cruise's personal interests and loyalties lie, I think they should have his head sticking out of one of the alien ships.

Did they have Thinsulate and micro fleece lining in the 80s? Maybe today's Freezy Freakies retro gloves have gotten more than just a size upgrade. Version Robot here goes all Optimus Prime on you when exposed to a chill.

Pink! Blue! Green! Yellow! White! Every member of a basic box of Crayolas represents in Freezy Freakies' Ski Alpine color-changers. It's actually hard to tell which elements of this eye-popping, Punky-Brewster-approved set of gloves magically appear when the temperature drops.

From 0 to 60 in 40 degrees. The Turbo gloves are race car themed for the dudes begrudgingly wearing gloves and suffering through winter weather, waiting for summer to come again.

At printing the best Freezy Freakies of all were sold out. But it's still nice to dream of owning these puffy pink bundles of 80s joy, just as we dream of owning the the magical creatures - which are technically unicorn-pegasus hybrids - they depict.

Well owl be damned. They didn't just make some Owl Mittens, they made some Owl Mittens covered in owls so realistic they are kind of creeping me out to look at, and I hope I never encounter anyone wearing a pair!...

What comes to mind when you see these Articulated Finger Extensions? Freddy Krueger? Edward Scissorhands? The Nightmare Before Christmas? Your black-hearted ex-girlfriend Karen (who, coincidentally, was named Karen before...

Ever wondered what it might be like to have webbed fingers? Wonder no longer. These durable latex rubber gloves will have you flying by other frogs in the water. Perfect for SCUBA diving, swimming, surfing, and even jumping...

If you can't score a pair of Bernie Mittens, might I suggest Flippin' Mittens as a close second in eye-catching and meme-worthy mitten designs? Running as a limited edition from Matt Benedetto's Unnecessary Inventions...

"Life's a bitch...now so am I!" From the wrist down, anyway, for those looking to channel their inner Catwoman in a pair of Vixy Den's Claw Gloves. Stalking around town as a DC antiheroine is just the tip of the talon...

Of course I don't need a mitten-koozie hybrid so that I may drink chilled alcoholic beverages in freezing temperatures, one right after another like the gluttonous, midwestern lush that I am, without rendering my delicate...

Finally a real need has been filled. Underpants for your hands. Great for protecting your hands while... eating chocolate and scratching your butt? Maybe these gloves should be worn under your regular gloves to protect...

Sweaty thumbs killing your vibe - and your character - in PUBG and Survivor Royale? You may have laughed at the likes of mobile game finger sleeves in the past, but when it's your own fingers growing clammy and causing...

Wait, Napoleon Leather BBQ Gloves? Does that mean they're sized for extra-small hands? If so, I can think of a pair of tiny hands or two who could use some...