Gifts for Fans of Fortnite 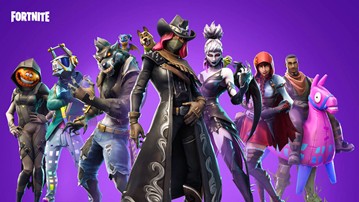 When I began pick(axe)ing around for gifts for fans of Fortnite I was really hoping to find McDonald's, or at least a McDonald's in France, in plans to release a Battle Royale with Cheese.

But even if it never happens, these creative and enterprising online retailers and independent artists have dropped a pretty good collection of merch onto the map that should satisfy all you fans of Fortnite out there, as well as those on the hunt for gifts for the Fortnite fans in your life.

Bring the longest 15 seconds of your life to real life! This pack of 16 Chug Jug Labels wraps around most bottles 2.5" in diameter and 3" tall, or larger. Think a 12-ounce Gatorade bottle or, if you want to turn this into a Chug Jug dare, a 28-ouncer of sriracha.

Once applied you can further congeal the Chug Jug label to your own bottle by heat shrinking it via a submersion in boiled water. Labels are made of glossy, tear-proof plastic.

We know you can sing in the shower, but can you Floss like a boss while you're getting sudsed up and squeaky clean?

Here we go, arms in front, arms in back, hips to the right, hips to the...whoa. Y'alright there? Did you hit your head? Should I call 911? Should I Floss like a boss on your dead body?

Sorry GAM* of Fortnite fandom. This Nike-inspired tee from independent artist shop Glam Graphix comes in kids' sizes only. You can give it to your wee one though, and then when you see him or her wearing it, take "Just Play It" it as an inspirational instruction you'd be wise to follow.

Let the games begin with where it all began. And if your gift recipient is more inclined to sit on the couch all cashew-spined over their controller playing Fortnite than they are to do some manual in the back yard, maybe Truper's pick and mattock head combo's similarity to the game's basic pickaxe will inspire them. Or at least make it easier for you to force their hand.

Dance, boy! I said, dance! Gone are the days of firing a gun at someone's feet to get them to bust a move. Now we do it Fortnite-style - with a grenade! And one that makes everyone inside the blast radius, not just one "boy" at a time, break it down.

Etsy shop Modified 3D prints these 5" Boogie Bombs out of biodegradable PLA Plus, and puts a few color-changing LEDs inside to complete the look.

Your standard Wood Crossbow build kit from Decoloris Shop gets for(nite)ified with the include of 3 Fortnite targets, in addition to 8 rockets, to use as targets when your shooter is finished.

All you'll need for crossbow assembly is a small screwdriver - all 46 wooden parts, screws, string, rubber bands, and zip ties are included, along with an instruction booklet.

Completed crossbows can take down Fortnite targets from up to 10' away.

Today marks the launch of Epic Games' Fortnite merch store, Fortnite Retail Row. It's mostly a bunch of unremarkable T-shirts, with the notable exception of this fine and juicy specimen. At printing the Durr Burger Onesie was up for pre-order, with shipment beginning in January 2019.

Unlike the Just Play It T-shirt, Durr Burger Onesies come in all kinds of sizes, from XS to 2XL, so all kinds of Fornite-fanning GAM and GAW can rock them during - and before, and after - Battle Royales.

Call it a Bottle Royale. The Chugger Jug is a 16-ounce water bottle designed in the likeness of every Fortnite fan's favorite 15-second potable.

Use the Chug Jug replica to keep yourself healthy and hydrated after an intense Battle Royale, or, you know, fill it with whiskey and make everything seem OK no matter how low your character's health goes.

The Nerf Fortnite AR-L Elite Dart Blaster (above) is Nerf's most expensive Battle Royale weapon, with a motorized blasting reel and acceleration button. It comes with a 10-dart clip. On the cheaper, albeit more 8-and-under, albeit more adorable end, is the Fortnite Llama Nerf MicroShots Dart-Firing Blaster. Along with the RL Nerf and TS Nerf, these mini blasters are shrunken-down versions of Nerf's larger models. They load and fire manually.

Gee, Hasbro, that didn't take long. Millennials had to wait over 30 years for their version of Monopoly, but I guess that's because instead of bringing in hundreds of millions of dollars per month like Fortnite their just shelling it out so the Baby Boomers can keep sucking up Social Security and hoarding real estate.

Because there's no greater Fortnite gift than becoming the creator of the next great emote.

Unless Epic Games refuses to pay or acknowledge your work, in which case you can join Carlton, Swipe It, and Floss dance masters Alfonso Ribeiro, 2 Milly, and Backpack Kid in suing them.

Call it a Bottle Royale. The Chugger Jug is a 16-ounce water bottle designed in the likeness of every Fortnite fan's favorite 15-second potable...

Let everyone know how you're faring this year with a Personalized Glowing Life Bar Pin. The horizontal health meters charge up in sunlight, and then glow neon green in the dark at your choice of Full Life, Mostly Alive...

The AuAg 55" gaming computer desk aims to be the gold...and the silver standard for gamers and their gear. The large desktop with "sleek carbon fiber texture" has enough space for a pair of 27" monitors, along with your...

Battle Bus? Looks like a Fortnite Party in My Front Yard Bus too. Why restrict this giant inflatable's lawn time to Halloween and birthday parties? If you're a Fortnite fan - or have a kid you owe big time for forgetting...

The electronic Personal Information Processor (PIP) manufactured by RobCo Industries in Fallout 3 and Fallout: New Vegas is now a viable acquisition to your non-gaming, non-digitized, biological life. Which is not only...

While a Pac-Man Ghost will definitely eat you up the first chance it gets, the little villain appears to be very protective, and equipped to take exceptional care of your houseplants...

Die-hard Fallout fans, avid gamers, and gadget-giddy dudes in general, I present to you: a working Pip-Boy Model 3000 Mk IV replica. Also known as: your Sunday morning hard-on. Sure, you could call ThinkGeek's Deluxe...

If you thought beating Super Mario 64 was hard to beat, get ready to try to conquer LEGO's new 2,064-piece Super Mario 64 Question Mark Block build. It might feel a little like banging your head against a...question mark...

My 13-year-old nephew has had gamer rage for, like, 5 years now. Oh man, he used to get SO MAD when the levels got harder in Super Mario Galaxy. Sometimes, if he knew he was about to die, he'd pause the game, hurl the...