Gifts for People Who Don't Think We Landed on the Moon 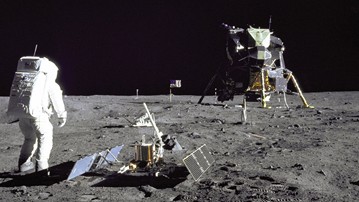 I was surprised to hear Steph Curry isn't the first person to think we never landed on the moon. That there have actually been many a conspiracist thoughtful skeptic who claims, and has endeavored to prove over the past 40+ years, that NASA's 6 manned Apollo missions from 1969 to 1972 were faked.

According various opinion polls, the demographics of people who don't think we landed on the moon include: between 6% and 20% of Americans; 25% of Britons; 28% of Russians; and 100% of people who wanted to make a documentary called Conspiracy Theory: Did We Land on the Moon? to run on Fox TV in 2001.

The primary motivation people seem to believe the United States had for scamming the world into drinking their lunar Kool-Aid is the Space Race Crown - holding claim to being the first nation to land and walk on the moon. Moon landing conspiracy theories explain how NASA, in collaboration with Hollywood, crafted the hoaxes and lies to the public, with some going so far as to say the US government manufactured some pieces of evidence, such as photos and moon rock samples, and destroyed others, such as key witnesses.

The evidence for the total wrongness of people who subscribe to these conspiracy theories has only grown in the years since the moon landings took place. For example, HD photos now available of the Apollo landing sites show the tracks Neil Armstrong, Buzz Aldrin, and other NASA astronauts left on the surface of the moon. There's also the handful of American flags they staked that are still standing there (with the exception of one that fell over after getting hit by Apollo 11's takeoff rocket exhaust.

Since his viral statement, it seems Steph Curry has announced he was Just kidding, bro! and his words were taken out of context. But that hasn't stopped the media, and NASA, from turning the whole thing into a press spectacle, which has seemingly culminated in Curry interviewing retired astronaut Scott Kelly.

Maybe, in addition to a slice of humble pie, Kelly brought Steph one of these gifts for people who don't think we landed on the moon.

It's called Moondrop Lunar because its calibrated design of metal and magnets makes the aluminum slider fall 38mm along its shaft in exactly 0.22 seconds. That's the same amount time it would take any object to fall that distance on the moon, where the gravitational force is 1.6 m/s squared.

Haha, moon deniers! The Moondrop looks like an innocent desktop fidget toy, but really it's just more science to confuse you and freak you out!

What If? - Real Answers to Absurd Hypotheticals

Written by Randall Munroe, former NASA roboticist and creator of the science/tech/language/love webcomic xkcd, What If? uses real science, and hard facts to tackle some of the stranger questions his fans have posed to him over the years:

It's not that the answers to any of these questions would convince a no-moon-truther of NASA's Apollo landings, but at least maybe they would give them something equally ricockulous, yet still more real, to think about.

AstroReality's replicas are 0.006mm per pixel-resolution 3D-printed, hand-molded and -cast, and hand-painted models of the moon. They come with AR features and an accompanying AstroReality app that allow users to experience the sights, sounds, and feel of the celestial body's surface.

Just like the NASA astronauts did in person during the Apollo missions.

Many moon landing deniers are also flat-earthers - it was the the Flat Earth Society who, in 1980, accused NASA of faking moon landings with funding and help from the Walt Disney Company. And they have way more merch available for flat-earthers right now than they do mooners - moonies? - moonatics? - so I think this Flat Earth phone grip and stand would still go over well with someone who doesn't think we landed on the moon, particularly if you want to give them a gift that you know is making fun of them, but they might think is just thoughtfully apropos of their belief system.

Maybe moon landing conspiracists were the kids who parents told them they couldn't grow up to be an astronaut. That they weren't smart enough, weren't skilled enough, couldn't even stomach the G-force of the pirate ship at the carnival, so would never be able to rocket into space. And maybe they developed a resentment for NASA, and the men who did become our first astronauts. Maybe all they need to see the truth is a little TLC. A nightly tuck-in beneath a thoughtful gift that lets them fulfill their childhood dream of becoming an astronaut.

I'm liking the thought of calling people who don't think we landed on the moon "moonatics," and I think the graphics on this shirt should definitely be their symbol. Maybe someone could make some audio to make it sound like the 3 wolves are howling Moooooooonatic! at the night sky.

Make it a full moon - and an excuse for everyone around to act full-moon loony - every night with this lunar light from Apollo Box. Made of acrylic and iron, the Full Moon Light is IP54 waterproof for outdoor installation...

The original Case Astronaut Knife M-1 blades traveled to the moon and back 9 times from 1968-1972. NASA commissioned them from W.R. Case & Sons Cutlery Company to stock the spacecraft for their Apollo program. For 2019...

Sleep under the light of the moon even on stormy nights, and enjoy the orange blaze of Jupiter without making futile attempts to go to Jupiter with one of these sweet spherical lamps from Pulsar Moonlight. Each is a unique...

Vroom, vroom! on the Moon, Moon with Hookie Co.'s Tardigrade Motorcycle, a 2-wheeled crater runner the German bike designers are calling "the world's first moon concept motorcycle." And if that sounds loony to you, just...

Analog Watch Co.'s new Lunar Watch might be kinda pricey, but how many timepieces can say that they're made of a solid piece of genuine moon rock estimated to be older than: the human construct of time; humans themselves;...

Lovers Under the Moon Lamp

It's time for summer lovin'. The Lovers Under the Moon Lamp captures that over-the-moon feeling of cuddling up with someone you love, in the quiet of night, surrounded by stars, and watched over by the pizza pie in the...

I want a hippopotamus for Christmas...no, wait. I come from a generation of spoiled, entitled, self-righteous narcissists. I can do better than that. I want three hippopotamuses. And I want them to have pearly white...

Picnic on the Moon Throw Blanket

What does one bring to a picnic on the moon? I mean, besides a Picnic on the Moon Blanket? Not too light of a meal, I'd say - you're going to need something that will weigh you down a bit, 'ey? Maybe some Texas BBQ ribs...

First and foremost, designer Sotirios Papadopoulos' Full Moon Cabinet ships with an accompanying CD of music custom-compiled to reflect its aura. Never mind that the lunar credenza is also coated with Eco Light Inside...

Finally, an accurate representation of the moon glowing in the dark. Notice how it isn't square-shaped or blazing all the colors of the rainbow like this alleged "Moonlight Pillow". According to Edward J.H. O, the man...