Gifts to Give Someone You're About to Break Up With 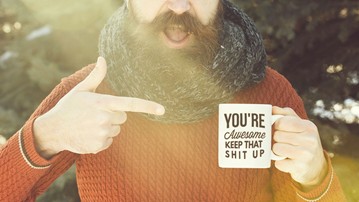 Breakup gifts can present themselves in a few different forms. 1) You know you want to end things with your s.o., but his / her birthday is coming up and you can't do it right before. Therefore, you need a gift to give someone you're about to break up with. Same goes for Christmas, Valentine's Day, and any sort of anniversary.

2) You've thought about it, you've prepared your breakup speech, but you know delivering the news is gonna suck. You want to let him / her down easy, but no matter what, you know s/he's gonna feel bad, you're gonna feel bad, and tears are probably gonna flow. In this case, giving a gift to the person you're about to break up with could also break up the proverbial ice, and provide a segue into "the talk."

Or just fill in the dead space when there's nothing left to say, but s/he isn't really letting you leave, and holy crap are things getting awkward.

3) At this point your feelings for the person you're dating or in a relationship with fall somewhere between mild dislike and hatred. Maybe they've done you wrong, or maybe they've just done nothing notable at all for the past X years. Either way, you are stoked to get the F out of this situation, and you're ready to do it in a blaze of glory. The right kind of gift could help fan the flames. Intensify the tears and drama, and make sure your severing of sexual ties goes off with a big SNAP!

I've got gift ideas to cover all of the above. Best of all, almost none of them are very expensive. (However, if throwing money at a problem helps alleviate the guilt you know you'll feel dealing with it, there are one or two that should meet your standards.)

Finally, the "nice" gifts to give someone you're about to break up with aim to be somewhat impersonal. No jewelry, photo frames, lingerie, something you made, something your mom made, or anything too thoughtful that could be construed as meaningful and indicative of your future together.

Because nothing goes with feeling gutted better than feeling patronized. Make sure to accompany this gift with the "It's not you, it's me" line.

I never would have thought of giving the recipient of your breakup speech a plant to ease the pain, if the exact thing hadn't happened to me once. It was 2006. Her name was Ellie. She gave me a little...huh. I really have no idea what it is. Something green and small in a terracotta pot. I considered throwing it in the trash after she told me I was great but she didn't want to see me anymore but here's a plant to have as a companion now. But instead I kept it. And it survived for, like, 5 years. The first plant I ever owned that I didn't inadvertently kill within a couple weeks. So, yeah, all in all, not a bad breakup gift.

"Yes," you'll respond. "The world's smallest Glow Worm, in fact. Isn't it cool? I thought it might remind you of childhood. I don't think we should see each other anymore. If you press its belly, it even lights up!"

Is s/he always losing keys or other personal items? The Tile Mate is a stuff finder for everyday things. Paired with an app or voice assistant it ring to identify misplaced items within a 200' Bluetooth range, plus link up to a Tile community to track stuff that's been lost farther away.

I like this as a simple, unsentimental gift for either a dude or a lady you're ready to break things off with...just as soon as [fill in the blank]. And between now and [fill in the blank] you've got to cross a major gift-giving holiday or birthday. It's like, "We're about to break up, but you can Tile Mate for life."

I like these tire traction straps for their impersonal thoughtfulness. They're like saying, "I care about your safety, and I don't want you to spin out and die...when I'm gone and you have to start driving yourself places in the snow.

No, I'm not saying you should be a complete asshole and wrap up a box of tissue for your dumpee. But if you think waterworks could feature prominently in your breakup, it would be good of you to have some available to offer like the gentleman / kind lady we all know you are.

And then when the hard part is over, perhaps you could whip out one of these Kleenex-Munching Cat Tissue Box Covers to lighten the mood, and leave behind as a memento of how considerate, good-humored, and feline-loving you are, even when you're breaking hearts.

And now on to the mean-spirited Sayonara! gifts. You can use Matthew Bowers' Written Performance Evaluation to provide your future ex an invaluable service: succinct, numerically-based insight not only into what they did wrong during your relationship, but also into how they can improve their ratings and become the type of significant other their future partners will not want to break up with.

A replacement. Of sorts. Something to help quell the all-consuming feelings of loneliness and despair that overtake your newly minted ex as s/he tries to fall asleep at night. Deliberately headless, so s/he can imagine your head in the empty space.

And if that doesn't work, you might maybe sometimes be available for the occasional booty call.

Link below goes to the 'roided-out boyfriend pillow. Click here for the anatomically wacked out girlfriend pillow.

And as my final act, I will tell you what I really think of you.

For 10/10 Good Riddance, fill with hot coffee first, and dump into dumpee's lap during gift handoff.

Link below goes to UNT Mug. Click here for the ICK.

A warm 'n' fuzzy embrace makes for warm 'n' fuzzy table lighting in the Hug Lamp by Mark Mitchell. Mitchell designed the lamp in response to the pandemic, and his personal experience of being separated from his girlfriend...

It's Choose Your Own Adventure IRL, and in the style of a scratch-off surprise challenge to create enriching and memorable experiences! OK, the word "adventure" notwithstanding, I guess The Adventure Challenge scratch-off...

Bond Touch Bracelets are technically a pair of vibrators you and your lady or dude wear on your wrist, but the spin Bond Touch is giving their deconstructed sex toys is "bracelets that bring long-distance lovers closer...

I don't give a f*ck about you...I give a whole jar of f*cks about you! Ha! What an unexpected linguistic turnaround! Not to mention the perfect gift for the girlfriend or wife who loves wordplay. And f*cks...

Happy to See You Naked Card

Ladies, the answer to your age-old question, "What are you thinking about?" has materialized in greeting card format. 78% of the time you query your man about his internal musings, this is the perpetual, 14-word loop...

Nobody Likes a Cockblock

Are you a parent? Then I'm sure you'll agree your precious children have taught you at least as much, and most likely far more, than you've ever taught them. Such as deep, unconditional love. Patience. Awe and wonder...

I Love Your Penis Box of Chocolates

Guess which dude got an I Love Your Penis box of chocolates this morning for Valentine's Day? Yep, that's right, my Aunt Jan's new boyfriend. What this dude got? A phone call from my mama telling me all about it. Gah!...

What Do I Do? Social Awareness Flash Cards

Yeah, yeah, these What Do I Do? flash cards are meant to help kids improve their social awareness and conversation techniques. But the box says they're for ages 5 and up, and given the comments and interpersonal communication...