How to Get Rid of the Year's Bad Juju 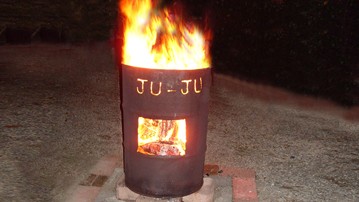 My sense is that this year was not anyone's Best! Year! Ever! But even if it was, you probably racked up at least a little bad juju you'd like to get rid of as we head into the New Year. Like credit card fraud, an illness or injury, a nasty breakup, a - ahem! - Fortnite addiction.

On a global level, there's plenty of 2018 bad juju we'd all be glad to leave behind too. Mass shootings. Bomb cyclones, earthquakes, floods, wildfires, and mudslides. The closing of Toys R Us.

While disasters, misfortunes, and the realm of bad juju don't necessarily follow and reset with our calendar year, we ourselves place enough importance on the changing of a digit that a new year provides us a built-in time to reflect. The opportunity to take stock of what went well and what sucked over the past 12 months, and to figure out how to leave the latter behind on January 1.

It's a proactive game, part mindset and part action. And, OK, maybe part out of your control. But let's focus on the first two, on prodding yourself along and making yourself feel a little better heading into 2019.

My suggestions for how to get rid of the year's bad juju aren't necessarily based on science, but they are based on the idea that doing something is better than doing nothing. And if you feel like you're releasing, disposing of, or setting something that's done you no good on fire, you're probably one step closer to feeling better about it in the New Year.

While fire can leave behind a giant, horrible mess - and I doubt anyone in California wants to go near it again this year, and maybe ever - it's also cleansing. Burn it clean, as they say. Or at least, with this Blaze Fire Tower, burn your bad juju to ash, and let it be carried off by the wind as flecks of nothingness, as you enter 2019 unencumbered and burden-free.

Bonus: The Blaze doubles as a grill.

Downside: It costs $500. Probably a little more than an old rusty trash can you cut a front opening and the words "Ju - Ju" into.

Here's an even showier way to burn your bad JuJu. Write down what you want to rid yourself of, latch it onto some fireworks, and load them up on a FireFly wireless firing module to send the year's bad luck and negativity exploding into the sky.

FireFly's wireless fireworks firing system still uses regular old fireworks to help you create your own light show in the sky, but it adds some nifty tech to make the process more accessible and dramatic for those taking part. With FireFly you'll be able to design a spectacle with up to 15 fireworks, synced to music if you want, and conduct it from your Android or Apple mobile device.

A less aggressive approach to flames and explosions, this candle from Good JuJu aims to destroy the bad stuff - in this case, your anxiety - by flooding it with good stuff. The Good JuJu candle is made of organic coconut and beeswax, with organic plants and organic aromatherapy grade essential oils.

You can't talk about juju without a little talk of voodoo. Art of the Root's Banishing Oil is a one-half-ounce tincture of goneness. The oil, hand mixed and made to order, is intended to remove negativity, hexes, and bad habits, as well as banish people.

Oh boy! Adios, in-laws and grunty guy who hogs the leg press machine at the gym!

It could be any salt, really, but this pink Himalayan variety has been very popular lately due to its high mineral content and gourmet-ness. Which is to say you can use the leftovers, the granules you don't sprinkle on the carpet, to season your food.

Oh, did I forget to mention you eliminate bad juju with salt by sprinkling it on the carpet? And then, about an hour later, vacuum it back up. New age-y people and witch doctors say salt has a natural ability to absorb negative energy. And if you don't feel like making a mess and vacuuming today, you can also put little bowls of salt in the corners of your chosen room to suck up the bad juju, and then remove them a few hours later.

Charcoal is known for its absorptive, toxin-removing capabilities, and I don't know if that specifically applies to absorbing and cleansing figurative bad juju, but I do know that these Bamboo Charcoal Air Freshener Bags will at least get rid of the bad smelling juju lingering from Christmas leftovers and New Year's Ever hangovers.

I don't know if this will clean the entirety of 2018 out of your insides, but the combination of the internal fire of Colon Blow Hot Sauce, and the stomach-scrubbing fiber of Crapola cereal below, you'll at least be cleansed of the holidays.

Crapola Cereal, an artisanal blend of organic, low carb fiber bombs, says it "makes even weird people regular." What joyous news if your bad juju for 2018 has been constipation! And even if not, a big bowl of the gotta go granola is the perfect way to kick off 2019 with a literal clean slate from the neck down to match the figurative one you're working on from the neck up.

I like the fortunes that say things like, "Soon you will be sitting on top of the world," and "May you grow rich," followed by a series of lucky numbers that happen to coincide with those drawn during this week's Power...

What does this Maneki-Neko lucky cat statue with one extra-ripped arm - the waving arm, of course - say? Welcome to the gun show, of course. Either that or, Wait, I was supposed to take those injections in both arms?...

I'm not Catholic, and mean no disrespect, but what the Coldwell Banker is a St. Joseph Home Sale Kit? Is this for real? Do people who bury a wee little statue of St. Joseph in their yard really sell their house faster...

Hell yes I could use some good luck. And the Insta-kind that requires no patience or input on my part would certainly be preferable. But my question is: do these four-leaf clovers that purportedly reverse misfortune...

Qi wireless chargers work as if by magic anyway, so it was only a matter of time before someone turned one into some kind of alchemy circle and named it the Magic Array Wireless Charger...

I'd say a Custom Shrunken Head Replica would make a great revenge gift for a frenemy, but given its cost and, more importantly, sheer awesomeness, I think I'd like one of Supermongrel Studios' ultra-realistic tribal trophies...

Hey, have you seen this Eastern Diamondback Rattlesnake Head Keychain? Yes? Well then, once the smelling salts have kicked in, and you've gotten on a clean pair of pants, my next question is: still need a mean and dirty...

The holidays. They encourage us to appreciate and reminisce about those we love. Yet somehow, they also provoke us to fixate on those we hate. Fred & Friends examined this 'tis the season, yin-yang dynamic...and saw dollar...

Nothing says "Happy Holidays" like charcuterie and voodoo. The OUCH! cutting and serving board is carved in the likeness of everyone's favorite stitched-up human likeness, and even includes the ominous knife in the back...

What You Need to Host a Badass New Year's Eve Party

Think of this as what you need to host a badass New Year's Eve party in addition to your 2 primary ingredients of booze and food. These 2020 NYE party supplies fall into 6 major categories: food, as in food prep or service...