Lost in the Woods: 15 Items to Help You Find Your Way 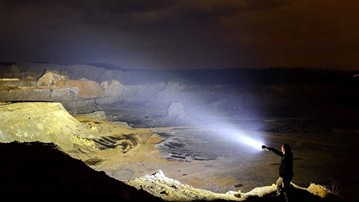 These 15 items that help you when you're lost will find north, map routes, illuminate dark spaces, and, when all else fails, SOS your stranded self some help. In other words, they will pretty much ensure you dudes and ladies can now go where no dudes and ladies have gone before. Or rather, where Google Maps and/or a dead cell phone have always cut you off before.

Note: All products to help you get un-lost are priced as they were at printing on April 29, 2022. Pricing, and availability, are subject to change.

The Garmin Fenix 6 Sapphire Multisport GPS Watch is an expensive commitment to being a badass. Top of the line in build and features, the Fenix 6 Sapphire edition brings a bunch of bells and whistles to your outdoor and fitness pursuits. And if those outdoor and fitness pursuits leave you alone in the dark at the top of a mountain? Or off-trail in an unfamiliar forest? Just in a random neighborhood with a dead phone during your vacation to Palm Springs?

The Cammenga compass sports a built-in magnifying lens, sight wire, and dial graduations in both degrees and mils. It has an aluminum frame and a copper induction dampening system to slow the rotation of its magnet without using liquids. Its housing has been battle tested shock, water, and sand proof, and the device will give accurate readouts in temperatures ranging from -50 degrees to +150 degrees F. Tritium micro-lights line the compass face to allow for night-time and low-light navigation. Also included in the package are a carrying pouch, lanyard, and belt clip.

Since 2022 has been so dark and depressing, why don't we try to spread some light throughout the rest of the year. Look here, I've got a Gonex 18,000 lumen flashlight I'm gonna flick on and...huh. Didn't even make a dent. 2022 just sucked that torch's light inside it, and ate it right up like a black hole.

OK, we'll bump up the intensity then. From 18,000 lumens to 25,000 lumens, courtesy of the X9R Marauder Flashlight. A press of the switch, a point of the beam right in the kisser, and...what the Four Horsemen of the Apocalypse, 2022? Did it even make your eyes water? Are you laughing at me? Are you mocking me and my... what? Measly man-baby lumens?

Aaalllrighty then! I guess it's balls to the wall, all hands on deck, powers aligned, hail Mary, Care Bears Stare time! MS18, get your flash out here! Let's show 2022 the light. 100,000 lumens of light! Powerful enough to sear away darkness and illuminate hope as it blazes through even the bleakest of times. ... Or, you know, up to 135 unobstructed meters ahead.

New to my list of Things That Make You Go Awww: the Beretta Signal Set, a 2mm pinfire gun that, despite its miniature status, shoots more than just a flag that says Bang!

The palm-sized Beretta is designed to fire both signal flares and 2mm pinfire rounds. Hikers, hunters, skiers, and other outdoorsmen and women might like to have along for the fun so that if the fit hits the shan, the skare can hit the fly.

If I had a nickel for every nickel that's ever gotten me out of a pickle, I'd have...one Shomer-Tec Nickel. Because, holy Thomas Jefferson, dudes, the Shomer-Tec nickel isn't just your average five cent piece. It's also a covert compass you can use to help escape kidnappers and hostile foreign environments, or keep in your car change tray for when your phone battery dies and you need to figure out where the H-E-G-P-S you're going without letting on to the scrutinizing wife sitting next to you that you're lost.

Strictly speaking, Attwood Marine's Bellow Signal Horn is meant for boaters and sailers, a tool to be kept on board for use in alerting others of your presence, or draw attention in emergency situations. You can also use it on land for the same purposes - a call for help when you're lost, or an attempt to keep wild animals at bay.

Finding your way when you're lost occasionally involves paving your own way. Or, in the case of the Woodman's Pal, hacking through brush, bramble, and branch to clear it.

The Woodman's Pal has been in service - US Army service - since 1941, and was a standard issue from WWII through Desert Storm. In official terms, it's a land management multi-tool, but I imagine when you look at the Woodman's Pal you probably see the same things I do: machete! Axe! Sickle hook! Good times in the woods!

Thor. God of Thunder. God of Lightning. God of Rechargeable LED Lighting. ThorFire's darkness accessory is a collapsible accordion lantern/flashlight with a built-in battery rechargeable via regular 5V USB or its fold-out crank and your own hammer-wielding hand. Suitable for indoor use during power outages, and outdoor use during camping trips, or any other dark conditions in need of easily accessible light, the ThorFire lantern has High and Low settings that give off 125 and 30 lumens respectively.

Not that I ever get lost, but - Oh, shush your face, She-Ra: Princess of Power! I wouldn't get lost even if I ever went somewhere either! - were I a directionally and locationally challenged person, I might like to have Bushnell's little personal GPS tracker, the BackTrack. In describing it, the company welcomes me to "the world of simple navigation," going on to say that "getting back at the end of the day is as easy as pushing a button and following an arrow." Hey, speaking of arrows, remember those T-shirts with the arrows pointing left or right that said, "I'm with Stupid"? Ha! Those were hilarious.

In essence, the BackTrack is a digital compass capable of storing up to 3 locations as GPS coordinates. It has just 2 buttons to finagle, and when you set a location for it to remember - whether in a crowded parking lot or campsite in the woods - the device will provide distance in yards/miles or meters/kilometers and a directional arrow back to that point.

Accurate. Works day or night. Functional without satellite, cell tower, or batteries. However, using the Ranger Pace Counter will require focus and baseline mathematical skills. So it's still not for everyone.

The strand of beads is a classic military and outdoorsman tool. Sure, we have much more sophisticated and precise distance measuring tools now, but the truly prepared will always learn the basics of land navigation because, as one reviewer points out, "GPS batteries do die." And a bracelet with plastic beads weighs a lot less than a smartphone or other handheld navigator.

When Tristan Gooley talks about The Lost Art of Reading Nature's Signs, he doesn't mean the ones that say, "Stay on trail," "Pack it in, pack it out," and "No camping," but based on human idiocy, ignorance, and obsession with the perfect Instagram shot, someone should write that book too.

Here, though, outdoorsman Gooley endeavors to teach us natural navigation, or, as he puts it, the ability to Use Outdoor Clues to Find Your Way, Predict the Weather, Locate Water, Track Animals - and Other Forgotten Skills.

The HyperWhistle takes its World's Loudest Whistle title not from Guinness, but from a mustachioed dude with a sound meter doing a review on YouTube. In the video, he hits a "personal best" 143 decibels with the HyperWhistle, and while I don't know if there are louder lung-powered noisemakers out there, I do know that 143 decibels is louder than a police siren, a jet engine, and fireworks.

But not quite as loud as Italian conversation, the Civilization V opening theme, and a shampoo bottle falling off the ledge in the shower, according to the world of memes.

In addition to its peak output, the HyperWhistle says it has an audible range of over 2 miles. That's great news for people lost in the woods or broken down on a boat, but terrible news for those within a 2 mile radius of an 8-year-old kid whose uncle gave him a HyperWhistle for his birthday.

Oh boy, time for an adventure! ... O-BOY, that turned into Mordor quickly. Send your satellite signal, share my GPS coordinates, and come get me, please, oh trusty rescue watch.

The O-BOY Watch is a forthcoming timepiece for outdoor enthusiasts that uses a private satellite constellation to send custom messages, SOS signals, and track points. It differs from similar devices currently available because it isn't limited to cellular network coverage areas. O-BOY's private satellite network can send / receive signals independently from local carriers, and anywhere in the world, regardless of how remote. Middle of the ocean. Middle of the desert. Middle of the forest...you get the picture.

You don't need a monthly or annual subscription to use ACR's ResQLink View Personal Locator Beacon, but if you decide to activate this tiny floating PLB, you better make damn sure you're in need of a search and rescue. Middle-of-the-ocean or deserted-island lost in a boat or plane. Medical emergency. Being held captive by the Kraken.

ACR sells its pocket-sized, flip-phone-looking GPS-enabled rescue beacon for "situations of grave and imminent danger to life" only. Boaters, pilots, and water sportsmen can keep the devices in their gear kits, or on their person, over the long term with little disruption to their activity. The beacons weigh just 5.4 ounces and their longest side measures 4-1/2".

Lighthearted and irreverent despite its serious topics, Consequential Dilemmas gives flowchart-styled counsel on heady questions such as: "Should I get married?"; "Can I drink at work?"; "Should I follow my dreams?"; and "Am I happy?" According to Knock Knock the flowcharts are for anyone at a crossroads who wants to guarantee they'll make their next choice "with pseudoscientific confidence!"

Oh boy, time for an adventure! ... O-BOY, that turned into Mordor quickly. Send your satellite signal, share my GPS coordinates, and come get me, please, oh trusty rescue watch...

You don't need a monthly or annual subscription to use ACR's ResQLink+ Personal Locator Beacon, but if you decide to activate this tiny floating PLB, you better make damn sure you're in need of a search and rescue. Middle-of-the-ocean...

One more Bat Toy for my Bat Toy Box! This pocket-sized tube that adeptly screws into a grappling hook was originally produced by EDO Robotics in response to a desert warfare operator's request for a lightweight, reusable...

I've wished I were a human bulldozer. A human airplane. A human beatbox. But a human compass? Never crossed my mind before North Sense...

If I had a nickel for every nickel that's ever gotten me out of a pickle, I'd have...one Shomer-Tec Nickel. Because, holy Thomas Jefferson, dudes, the Shomer-Tec nickel isn't just your average five cent piece. It's also...

Accurate. Works day or night. Functional without satellite, cell tower, or batteries. However, using the Ranger Pace Counter will require focus and baseline mathematical skills. So it's still not for everyone...

Yeah, I wondered the same thing. When you're done using this handsome ITO Japanese Compass to draw some perfect circles, can you use it to perfect your walk the dog and sleeper yo-yo tricks? Let's see...string...pencil...locking...

Nothing caps off a grueling, straight-up, 10-mile ascent in the summer heat better than showing off your baller gold pocket compass to all the sweaty beards in the latest REI gear mowing on their Whole Foods trail mix...

A 3D compass isn't so much an invaluable outdoor tool as it is a nifty demonstration of physics and Earth's magnetic field. Don't get me wrong, it might be the most accurate compass you'll ever use. But being made of...

I don't think it will do much for blindness, but this Military Prismatic Sighting Compass could be your Amazing Grace for being lost. Features of the camo-printed conquerer of directions include:...