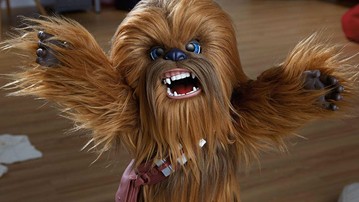 Star Wars Day has come again, and along with saying May the 4th be with you in 2019, I can also offer you this collection of the best Star Wars gifts the months since Star Wars Day 2018 have forged for us. Plus a few galactic classics centered around Darth Vader, Han Solo, Chewbacca, the Stormtroopers & Co. that never go out of style.

Personal note: The above photo of the Star Wars FurReal 16" Interactive Chewbacca is one of my favorite Star Wars images I've ever seen. Cracks me up every time I look at it and imagine Chewie howling, Aaaaahnr uughghhhgh huuguughghg huuguughghg!

Obviously, that's May the 4th be with you in Wookiee.

Use the Force...of the sound waves generated by slapping your palms together with the Star Wars Darth Vader Clapper. Appearing out of nowhere from 1988, this sound-activated outlet controller - perhaps the original smart home device - seems to be going the Chia route, and rolling out pop culture versions of itself to renew its relevance. And revenue.

This series of scented Star Wars candles features 5-piece sets corresponding to each of the films in the original Star Wars trilogy: A New Hope, The Empire Strikes Back, and Return of the Jedi. The collections, which contain some...puzzling...choices of scents to burn, are released as limited editions, so if you want to light up your room with aromas of Jabba's Palace, Bantha Milk, and the Inside of a Tauntaun, better get 'em while they're hot.

According to Royal Selangor, "Jabba may have humiliated the Captive Leia by compelling her to dress as a slave and keeping her on a leash by his throne, but nothing diminishes her regal bearing, nor the determined look in her eyes" when immortalized in pewter.

This pricy piece of Star Wars pewter sees Slave Leia as part of a 5,000-piece Royal Selangor limited edition. Each is individually numbered.

Star Wars: Women of the Galaxy

Author Amy Ratcliffe explores sides Dark and Light, and all the female-driven galactic stories, in between in this collection of insights and behind-the-scenes details of the ladies of the Star Wars universe. Complementing, and in many ways overshadowing, the narrative are 100+ new illustrations of the Women of the Galaxy, all done by 18 different female and non-binary artists.

Star Wars: Women of the Galaxy highlights 75 female characters from the franchise, including those in films, fiction, comics, animation, and games.

I know it doesn't sound very Dark Side of me, but I'd much rather use a Darth Vader lightsaber to make my morning smoothie than duel at a cosplay convention. It's just so much more practical. The Star Wars Vader Lightsaber Immersion Blender pairs replica hilt base with the Dark Lord's trademark red blade now serving as the blending arm. Use the blender as a handheld mixer for smoothies and soups, mashed potatoes, or even mixed drinks.

A long time ago in an omakase far, far away.... They say this Star Wars Soy Sauce Dish Set is made out of traditionally crafted genuine Arita porcelain from southern Japan, but at that price for the faces of Darth Vader, an Imperial stormtrooper, C-3PO, and R2-D2 stuffed in a wood box, the sushi juice reservoirs should be made out of traditionally crafted plastoid body armor from southern Kamino.

Regardless of which Star Wars team you thought you're on, if you're going to buy a Death Star USB wall charger, you'll have to root for the power of the Dark Side.

The outlet-ready Death Star comes with a pair of USB charging ports, and the galactic superweapon's eye glows green when it's plugged in. Presumably this glow is powered by an LED, not an octet of lasers fixin' to converge and fire.

Minus the Rebel Alliance arm badge, Musterbrand's cardigan is a pretty abstract tribute to Chewie. It does have a semblance of style though, including a brown gradient coloration and asymmetrical zipper and hood, which all kind of make it look as much like a take on a Jedi robe as it does Wookiee fur. Also, Musterbrand fancies itself kinda fancy, so the Chewbacca Brown Star Wars Cardigan is on the spendier side.

Chewie doesn't look too happy to have been turned into a 16" interactive plush toy for FurReal's Star Wars collaboration. Or maybe he's just pissed the punk kid who got him isn't paying him enough attention.

Plush Chewie's lips and eyes move whenever he's in motion, with expressions ranging from angry snarl to Elvis impersonation to Michael J. Fox as Teen Wolf after he's just sunk the winning 3.

In addition to advanced motor skills the Ultimate Co-pilot Chewie figure can also engage in some verbal sparring, responding in the Wookiee language, sometimes even laughing, to anyone who engages him.

Looking for an explosive golf game? Take a super weapon with you to the greens this weekend. Just make sure you wrap up the 18th hole well before sunset if you ever want to see these black orbs of the Empire again.

The Death Star golf balls come in packs of 3.

This Lightsaber Willy Warmer might be the finest expression of Grandmas's yarn I ever saw. Not a bad tribute to Star Wars either, presuming you've mastered The Force well enough to wield this saber once it's fired up. Better ditch the Uh-huh! and Oh baby! and start practicing your Swish! and Buzz!

Meet the Starkiller, here to make you the star of a killer party...especially if you're hosting a bunch of Star Wars fans. The lamp and liquor dispenser from Rustic Design features industrial pipes, metal hardware, and...

No longer must you search the galaxy to find this Rebel Bass, but you will have to wait at least 3 months to get it. Last Fall, after photos of his custom Star Wars guitars had gone viral online, Englishman Doni opened...

The good news is this is the first ever Standard Line version of a Star Wars: The Force Awakens First Order Stormtrooper Helmet, and you can have one for $200 ($249.95 if you wait until October 1 to order). That bad news...

This Lightsaber Willy Warmer might be the finest expression of Grandmas's yarn I ever saw. Not a bad tribute to Star Wars either, presuming you've mastered The Force well enough to wield this saber once it's fired up...