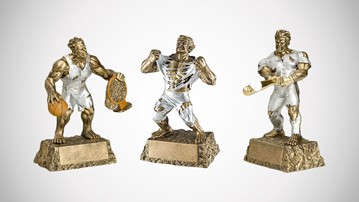 Know what winners do? Winners beat their chests. They stomp the ground. They Rrrrawwwrr!. They...collect their sweet-ass Monster Victory Trophies depicting exactly what they look and feel like after such a triumph.

Oooh, engraved with the series name and season, if the Settlers of Catan League has enough left over from registration and Pringles snack fees to pay for it.

Decade Awards' Monster Victory Trophies come in 'roider-on-a-rampage styles for all kinds of popular team sports. Baseball, soccer, golf, football, basketball, even bowling. Hulking awards and their bases are made from a resin cast design, and painted bronze to enhance their formidable presence on your bookshelf.

Note: Monster Victory Trophy prices are approximate and listed as they were at printing. Prices are subject to change.

Here's where you can really get creative about who you give a raging, violent-looking beast to as an emblem of their excellence. This Monster Victor carries no distinguishing props, other than the gold-belted white track suit he's ripping from his body, and a giant letter "V" that appears to be scar-tattooed over his entire chest.

FIFA's sparing no expenses this year. A gold and silver finish, 6.75" tall, and enough space for 3 lines of engraving!

Pretty soon, as doping continues to advance, the Monster Baseball Trophy will no longer be a caricature of our winning Little League players, but a sculpture made in their likeness.

I wish more golfers looked like a zombified Dolf Lundgren on the course. It would sure make golf a helluva lot more interesting to watch. If Monster Golf Trophy won The Masters, I wonder what would be on his Champion Dinner menu the next year. Definitely something ... someone ... served bloody.

Bet Jesus Quintana has taken home a Monster Bowling Trophy or two. In fact, I bet the teeth-gnashing barbarian on the trophy is the one who taught him all his subtle and nuanced trash talk: Are you ready to be fucked, man?

The Monster Basketball Trophy isn't actually for the winner. It's for the spoil sport. The one who couldn't hit a shot if the basket were set at waist-height, so he just tears it down, takes his ball, and goes home.

He may not be the winner, but if no one else can play, they won't be either.

Finally. A Monster Victory Trophy that's actually representative of its sport's players and the way they play their game. I know whoever wins a Monster Hockey Trophy fought tooth (dentures) and nail for it.

I know Halloween is over, but I'm showing you these furry friends & fiends motorcycle helmet covers not as costumes, but as ways to display on the outside who you are on the inside, every time you ride your bike...

She waits. She lurks. She stalks. And then suddenly, out of the depths of my 8-quart stock pot, Nessie emerges. Oh the terror! The foreboding doom! The...hey, what's the Loch Ness Monster got in tow there? Is that a ladle...

It's that time of year again. Gotta watch out for the ol' vent dragons building nests in your air ducts. Pushing through the grilles when they get jumpy, or smell bacon cooking. Tempting your children, possibly your wives...

I know the toilet goblin prank isn't a new one, but I just saw Aubrey Plaza on Hot Ones, and when Sean Evans asked her what the best prank she ever pulled on Parks & Rec was, she said she put one of these goblins in the...

Monsters in America: A Cryptozoological Map of the United States provides descriptions and locations of origin for beasts ranging from the Jersey Devil, Bigfoot, Mothman, and Chupacabra to Shunka Warakin, Caddy, the Honey...

Remember John Carpenter's They Live? If you weren't into aliens and kitschy (yet poignant!) social commentary in 1988, the film suggests that America's "rulers"--the rich, the powerful, the elite, the CEOs and politicians--are...

Kit Kat monster twins? With googly eyes, sharky teeth, and legs?! Sounds like nom, nom, nom, only the other way around. They're called KillKats, and not just because they're Evil Wafers (in Demonic Possession!) Also because...

The people who rattled our game nights with Exploding Kittens think we're up for a new challenge: an army of evil and grotesque babies. Bears vs. Babies is another ridiculous card game filled with implausible (but not...