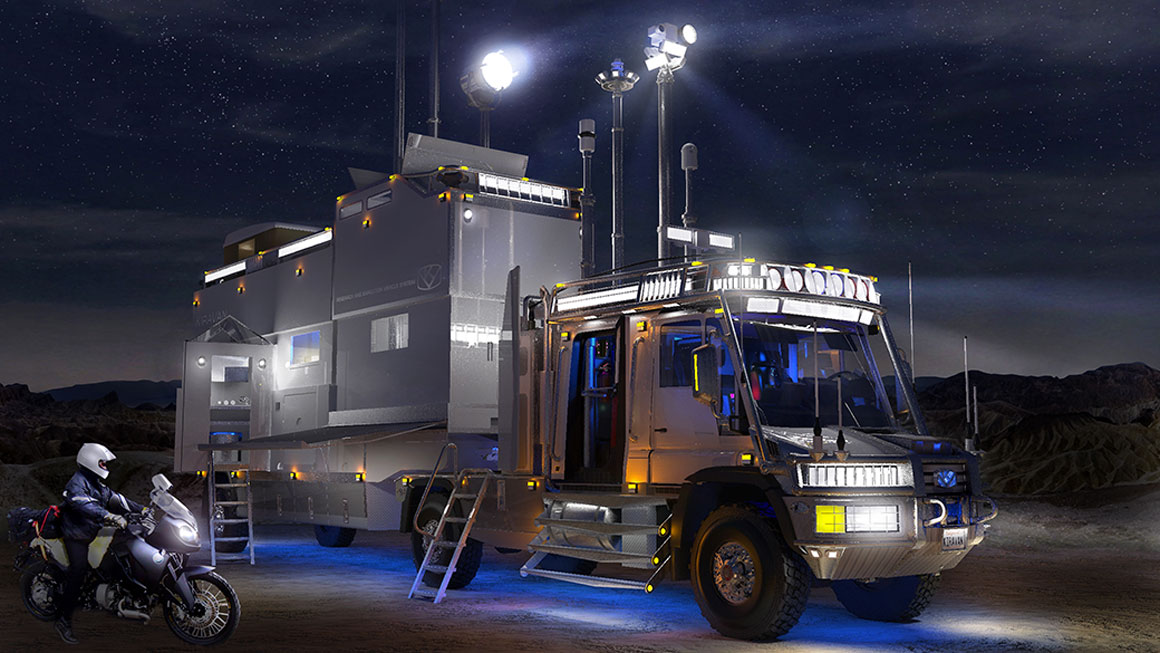 The vehicles of tomorrow we keep hearing about? Luxurious street-legal hybrids that kill it off-road. Self-sufficient wheeled islands that can high-tail it off the grid when the world goes south. Electric wonders that cruise emission-free for hundreds of miles on a single charge. And, yes, flying cars. They're all here. Some of them close enough to drive home, some within arm's reach, and some coming full speed into our line of sight. Probably. If they can just get the tech to work off paper....

(Note: All items' prices are listed as they were at printing. Prices are subject to change.)

AeroMobil 3.0 Flying Car. Still in development stages, though a regular flight testing program has been in place since October 2014. The AeroMobil 3.0 can transform in seconds from an automobile to an airplane thanks to its incorporation of existing infrastructure for both vehicles. Even better, it uses standard gasoline, drives in traffic the same as any other car, and fits into a standard parking spot. Yeah, probably like the Toyota Sequoia "fits" in the office garage spot next to your Chevy Aveo, but whatever. Driving an airplane to work and parking it like an asshole would still represent a great technological feat for mankind.

As an airplane, the AeroMobil should be able to take off from and land at any airport worldwide, as well as any grass strip or paved surface a few hundred meters long. Version 3.0's body shell, wings, and wheels are composed of advanced composite material. Inside, drivers/pilots will find avionics equipment, autopilot features, and a parachute deployment system along with, like, a gas pedal and brake.

KiraVan Terrestrial Spaceship. Custom made to order, contact for pricing. A monster of a truck/tractor/trailer/RV...with a turbo-diesel motorcycle stored in an elevator system at the rear thrown in for good measure...the KiraVan might be the most extreme combination of power, ruggedness, and luxury ever to hit the road. And the off-road, which creator Bran Ferren optimized his spaceship on wheels to tackle just as easily as the highway.

The front end, tractor portion of the KiraVan is a modified Mercedes-Benz Unimog U500NA. It's powered by a Mercedes-Benz 6-cylinder in-line 260HP turbo-diesel engine, high-efficiency, intercooled, and capable of providing 700ft-lb of torque. Extending from the tractor is a "trailer" that pretty much transcends the term in every way possible. While connected the trailer can share power, pneumatics, hydraulics, networks, and communications with the KiraVan tractor. It is also fully operational as a solo module and stationary base if the tractor is physically disconnected (the two vehicles remain data-connected and may perform coordinated tasks regardless of physical proximity).

Mercier-Jones Supercraft. Starting at $75,000. The Mercier-Jones Supercraft is a hovercraft that can achieve a lift of 7 inches. Wait, don't stop reading! I know that's not an epic flying car altitude, but it does allow this amphibious vehicle to cruise over the following (while all the rest of us sit in rush hour's parking lot, or get cock-blocked by the weather when we want to go out): land; field, sand; mud; pavement; grass; dirt; gravel; lake; ocean; snow; ice; flood.

Mercier-Jones has structured its Supercraft to float on a cushion of air, similar to the levitation and movement of air hockey pucks. The vehicle's air cushion is suspended inside a flexible skirt to help compensate for changes in terrain and provide clearance for obstacles. And in addition to mugging high-end sports car aesthetics (Bugatti Veyron, Maserati Gran Turismo, and Audi R8 amongst others) the Supercraft was also designed to drive like one. Its directional control system promotes advanced maneuverability in the forward, lateral, and reverse directions, and intuitive pilot inputs help make the learning-to-fly process relatively easy.

QUANTiNO. NanoFlowcell technology still in testing, but if QUANTiNO ever makes it to market, its Liechtenstein-based maker intends it to be priced competitively against other compact cars on the road. It's a big if though. NanoFlowcell is a further advancement of redox flow-cell systems. In theory, the QUANTiNO's nanoFlowcell will be able to store and release electrical energy at heretofore unseen energy densities, despite its proportionately compact size. The benefit: up to 620 miles of zero emissions driving per charge.

Marchi Mobile eleMMent Palazzo. $3 million+. German luxury vehicle manufacturer Marchi Mobile has created the eleMMent Palazzo, a land yacht fit for accommodating both Doc Brown's latest advancements in flux capacitors, as well as the average citizen with $3 million to spend on the ultimate cruisemobile. The Palazzo is stacked with two full floors of recreation and relaxation. In addition to its duo of interior and exterior lounges, the vehicle houses a deluxe master bedroom with integrated bathroom. For sleeping on the road, plus--I quote--"pleasant recovery" following the use of its multiple on-board bars. A slide-out cube on the driver's side can also increase interior space by 80%.

Local Motors Rally Fighter. $99,900. It looks like a race car...mostly. But something about the curves of this Local Motors release suggests a little more luxury lies behind its wheel. While the Rally Fighter is designed with a rugged tube chassis construction for tearing it up off-road, the vehicle is also street legal in all 50 states, and incorporates "all the requisite creature comforts" for anyone interested in using it on the open road or during the daily commute.

Like all Local Motors vehicles, the Rally Fighter is a complete collaboration between the maker and the buyer. Each car is a one-of-a-kind build, designed for any skill level, and incorporating personal input on over 50% of the final product.

Aero-X Hovercraft. $85,000 estimate. The Aero-X is still in development, though maker Aerofex has an anticipated first-run delivery date of 2017. Interested parties can reserve an Aero-X with a $5,000 refundable deposit. So what is it? Part motorcycle, part off-road vehicle, part helicopter, the Aero-X can cruise at around 45mph, and up to 10 feet off the ground. It rides like a motorbike with intuitive controls and responses to driver's movements, and aims to be low-maintenance with few moving parts, and a rotary engine powering it. Aerofex sees its hovercraft's practical applications spanning from land surveying and border patrol to search and rescue and disaster relief. "Or," they add, "maybe you just want to go out to the desert and fly."

Icon A5 Sport Aircraft. $139,000. An airplane with the cockpit of a Lotus sports car that can float or fly at the behest of a pilot without a true pilot's license? The ICON sounds like a terrific idea! Apparently in 2004 the FAA did something inconceivable: it lessened its restrictions on aircraft categorization and created the Light Sport Aircraft designation for adrenaline junkies jonesing to do some weekend air wheelies in a two-seater with wings. The ICON aims to "democratize" aviation with a functional, accessible (well, price notwithstanding) float plane that requires only a Sport Pilot's license to commandeer.

Polaris Slingshot SL. $25,200. I actually saw one of Polaris' Slingshots on the street the other day. The guys driving it thinking they're the second coming of Christ for riding in a 3-wheeled buggy with a hood. I only ran after them for 2 blocks so I could keep seeing how glad I was not to be in the driver's seat.

The Slingshot is officially classified as a 3-wheeled motorcycle, meaning it has no airbags and doesn't meet automotive safety standards. What it does do: sit inches off the ground so you can feel the road in your chest. Deliver a 360-degree onslaught of sight, sound, and smell with its open-air cockpit. Put out 173 horsepower with a single drive wheel and a total weight of less than 1,800 pounds.

Elio. $6,800. Another 2-seater, 3-wheeler with a reverse trike configuration. But this one gets 84 miles per gallon and costs a fraction of the base price for the Slingshot SL. The problem is, the Elio still isn't out. The company is happy to take your name and money--to date they've done as much for 40,000+ supporters--but as of 2015, they pushed back the little car that could's release date another year, to mid-2016. That's after an initial promise of models on the road by July 2014. One more good idea without the tech and mechanics to back it up? All we can do is wait and see.

Dog overboard! might not be such a big deal if you've got a pup who loves to swim, but Dog back onboard? As in getting yours there when he's had his fill of the water? Now that can be a doggone mess. But, a doggone mess...

Ark up, Noah! It's time to seek out two of every kind of party animal you know, and lead them onto the Arkup Livable Yacht, a floating home that motors from dock to dock, sea to sea, and tropical paradise to coastal city...

When the tiny home fad caught up with Quebec-based boat builders Daigno, I'll bet it didn't take them too long to conclude that the only thing more adorable and romantically minimalist than a tiny house is a tiny house...

Were these sweet (cheeked) Butt Buoys used in the making of Weekend at Bernie's? If not, they should have been. Ahhh, nothing screams 80s class louder than a PVC anchor marker fashioned in the shape of an inverted lady's...

In a way it sucks that the Black Swan Superyacht is just a concept right now because that means its technologically-advanced, supremely-luxurious, ninja-shark-looking self doesn't really exist. But in way it's good too...

You won't be able to glide through the salty sea in a Pakayak this summer, but you should at least be able to pledge your loyalty to what the company is calling the world's first nesting kayak. The Pakayak's Kickstarter...

Weedoo Workboats are a niche piece of heavy equipment designed for the cleanup and collection of water vegetation. That is, they're big ol' aquatic weed-whackers. With nifty conveyor planks that help corral and bag the...