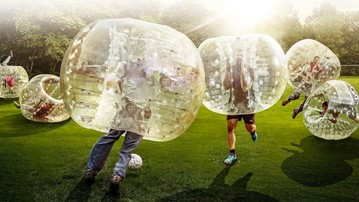 My efforts to bring you the 12 best products for socially distanced summer fun have produced activities for the indoors and out. Some are solo endeavors. Some are pastimes for the whole family, or you and the randos you share your home with. Some are ideas for kiddie entertainment that send the wee ones off on their own, so you can have a moment of peace to read your book. Or spend time with your other wee one.

You know, your penis.

Here are my picks for the 12 best products for socially distanced summer fun.

Note: socially distanced summer fun buys are priced as they were at printing. Pricing, and availability, are subject to change.

Project 120 inches worth of movies indoors or out, no enclosed, crowded movie theater required. I recommend anything with Ben Stiller.

Just kidding. I recommend nothing with Ben Stiller.

This movie screen is made of wrinkle-free, non-deformable polyester fabric, which means you can fold it down and bunch it up without having to iron the screen prior to use, or settle for creases across your favorite actors' faces. Though maybe you'll want to see creases across your favorite actors' faces since it will make them look more like the rest of us.

A little something - albeit with a much bigger price tag - to go with your projection screen. The CINEMOOD Portable Movie Theater boasts both about the big things it projects outside and the big things it contains inside. The 3" cube serves as an indoor / outdoor projector with a 5-hour battery life, as well as a content device. CINEMOOD has built-in access to streaming platforms such as Netflix, Amazon Prime, AmebaTV, and YouTube, plus comes pre-loaded with a wad of Disney content for kids.

CINEMOOD's portability and ability to turn any surface into a screen makes it easy enough to take for movie nights at the campground, Prime videos in the backyard, and cartoons on the ceiling Sunday mornings. The cube also comes in a 360 model, offering 360-degree, VR-style immersion during viewing, as well as playing games, without a VR headset.

It's like 6 feet of distance and a face mask all rolled into one wearable orb of PVC!

For the record, I have no idea if it's considered safe social distancing to climb inside a battle ball for a topsy-turvy game of bubble soccer. But I'm sure it's a bad idea for all the players to take the balls off because they're about to get heat stroke from being fully ensconced inside an ultra-thick piece of inflatable plastic, and then breathe heavily all over and slime each other with their sweat before deciding to just sit shoulder-to-shoulder drinking beers and talking as loud as they can instead. Which is 100% the way I've played bubble soccer in the past.

So maybe rather than 20 of your old frat brothers in the city park, just a coupla battle balls and you and your friend Cornelius in his backyard is a better choice for this method of summer fun this year.

LA-based escape room company 60out debuted the Miss Jezebel Virtual Escape Room experience in May 2020 to provide a figurative escape from the monotony of lockdown. Conducted via Zoom, this adults-only interactive theater provides a new way to connect and collaborate with family, friends, and co-workers you may not be able to meet up with in a physical escape room for a long time.

Virtual escape room gameplay accommodates 2 to 5 players who Zoom-control a real actor stationed in the environment through his / her actions and dialogue. In Miss Jezebel, the actor is a dude going undercover "in the lair of the infamous black widow, Miss Jezebel." Players must help him collect clues, solve puzzles, and navigate his way back out. All players must be 18 or older, because apparently Miss Jezebel and her abode put the "R" in "raunchy."

Solo fun in the great outdoors. And if you fly this Octopus Kite around someone with chapodiphobia, they won't just keep their requisite distance, they'll go a-runnin' the other way.

The Octopus Kite, of course, has 8 tentacled tails ready to glide through the wind as romantically as they do through the water. The airborne beast of the sea extends about 24-1/2' long, so pilots and spectators should find it just as mesmerizing to watch it fly overhead as they do to watch it swim down below.

Self-described as "the world's first virtual intimacy system," Virtual Mate is a hyper-realistic VR sex game for your PC, laptop, mobile device, or VR Headset primed to beguile and get off everyone from gamers to, well, dudes with a pulse.

See the lovely lady in the image above? That's Sheila. Virtual Mate V.1., who doesn't look so virtual to the eyes of this dude. You dudes can also see and hear her in action (NSFW action, mind you) on the Virtual Mate website.

If my mama had installed a Ninja Warrior obstacle course in our backyard when I was a kid, she could have saved herself a lot of the yelling and arguments that ensued when she told me to get off the Nintendo and go play by myself outside. A slackline with a bevy of swinging, dangling, and climbing attachments? That would have been like a real life Nintendo game, and probably even more fun to play. I would have gladly gotten the hell-bound devil child out of her hair if I had a Ninja Warrior obstacle course awaiting me out back instead of torn-up Slip 'N Slide and the neighbor's fat cat, Willard.

Big enough for you and your live-in s.o., but also sized to accommodate nonstop fun for one. Imagine what you're going to stream on that 43" HD flatscreen! Bow-chicka-bow-bow!

The problem with the La Scala pimped-out jacuzzi is it's just another in a long line of life's Catch-22 creations. It costs at least $40 grand, so if I could convince the bank to give me a loan for it, I'd probably have to work harder than a back alley hooker for the next decade to pay it off. Yet, the second I settled into one of the the pool of hot bliss' ergonomic loungers, fired up its jets and underwater lighting, and began watching Hot Tub Time Machine, all inclination and motivation to work - perhaps even all of the little professional competence I even possess - would evaporate with the jacuzzi's swirling tufts of steam. La Scala, you would complete me, and then you would end me.

I like how the plug for this handheld version of Oregon Trail (best Apple IIGS computer game ever!) is "Learn about the realities of 19th-century pioneer life on the Oregon Trail." Because when I used to play it, learn I did. Learn indeed. Here's what I learned:

4) Buffalo move fast! They are hard to shoot down with your mouse even when everyone in your starving, dysentery-afflicted family is depending on you to get one.

Not recommending you invite all your friends over and lube this baby up...though that reminds me. Oh how I miss the days of bulk gelatin and backyard Jell-O wrestling!

However, if you are a member of a family with a sizable backyard and a head count of greater than one (or not, nothing wrong with solo sliding!) World of Watersports' heat-beating Super Slide is a 25' long piece of aquatic fun, with room to grow if you buy more than one.

Live! from my mama's basement, sipping on White Russians and unwrapping free samples of CBD oil, beard oil, wifi routers, and TERRACOCK'n'BALLS Planters people have sent me, it's The Dude!

Created by Roland, the GO:LIVECAST condenses everything you need to put together a pro-level webcast with your smartphone or tablet into a wee little desktop controller. The mini streaming studio's hardware / app combo gives you the ability to connect up to 3 mics, mix sound, display titles, play media, and trigger sound effects on air, without the added heft, space, and cost of an adjacent computer or dedicated AV gear.

FiberFlies' PixelWhip is more than just your color-changing fiber optic whip for the bedroom club. Think about all the fun you could have with it on the bed 4th of July. Especially if your girlfriend town isn't down with traditional S&M toys fireworks.

The PixelWhip's 80+ fibers extend a socially perfect 6' from its hilt. A single button controls both on / off operation, as well as switching between a full spectrum of LED colors and light modes.

It's what's on the inside that counts, right? The Crua Culla Maxx is a temperature-regulating inner tent that keeps you warm while camping on cold nights, or cool while camping on warm ones...

Your kid in a boxing fight versus a giant kangaroo. Now that sounds like a losing battle. BigMouth Toys has even given their kangaroo - Kangaroo Jack - a pair of boxing gloves and the ability to shoot a 360-degree spinning...

Now this is the kind of coiled, hissing, spitting cobra I like. The kind that coils attentively near my sweating brow, and hisses and spits a cool and continuous mist of water my way. Orbit's Flex Cobra Portable Mist...

Cool off with some hot pants. Daisy Duke's got nothing on these Jean Shorts Swim Trunks. More like swim briefs, really, as the faux denim suit is ready to show off your sweet ass and your formidable junk with equal skin...

Runaway ping-pong balls from a ping-pong table floating in water: less annoying or more annoying to chase after? Also, playing ping-pong in water: harder or easier? Only one way to find out, I guess. I'll bring the Poolmaster...

Make that "Geizeer Super Cheap and Eco-Friendly Ice Cube Air Conditioner." (And it's actually pronounced "Guy-zer," not "Gee-zer," even though in my head it will always be the latter.) At an operational cost of less than...