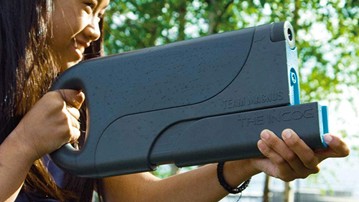 Squirt guns and Super Soakers, water cannons and water balloons, even a pair of dunk tanks get their day on my list of the 12 best squirt guns & water fight gear for the summer.

Note: Water guns and water fight gear are priced as they were at printing. Pricing, and availability, are subject to change.

I don't know Magnus, but based on the looks of his Incog Water Gun - sleek, svelte, and stealthy - I'd be on his team for a water fight. Honestly, with a name like Magnus, I'd feel pretty comfortable being on his team for a bar fight or, like, a fight to save Earth from hostile aliens too.

But let's stick with the water fight for now. In a nod to MI5, the Incog Water Gun reimagines your standard squirt gun or Super Soaker as a more stylish, and easily hidden, blaster of H2prOjectiles. Team Magnus says the Incog also feels more ergonomic to hold and use, and is more in line with "modern kids' gadgetry." As if you're going to give these water guns as gifts for your kids, and not just buy a stash for you and all your friends Cornelius to use in your mama's backyard this summer.

A backyard dunk tank will translate to hours upon hours of slightly mean-spirited amusement on a hot day. Not to mention a few more dollars in sales for Apple when half of the eager beavers scrambling for the platform forget to clear their pockets of their iPhones first.

This classic dunk tank is pure, old-school carnie fun for the summer - a surefire lure for birthday parties and BBQs, and a terrific way to keep kids entertained. Or teach them to swim.

Remember when you used to put lightning bug butts and water in the blender and then use them to fill your squirt gun for nighttime fights with your friend Cornelius? Ahhh, childhood in the 80s. That was cool. Maybe even cooler: the SplashLight. The SplashLight is a bioluminescent water blaster that fills with a natural ReLume protein solution, so kids of the 2020s don't even have to hunt down fireflies or get in trouble for putting them in their mamas' kitchen appliances to nail each other with glowing jets of water.

Save a horse, ride a pool toy. The Inflat-A-Bull might be the most clever - and scariest; check out the photo-realistic print on that toro's face! - pool toy I've ever seen. And he's here to buck you right into summer.

But what makes the Inflat-A-Bull water fightin' gear? Well, cowdudes and cowladies, lather up his hide up with some Hawaiian Tropic tanning oil, get a few friends Corneliuses to agitate the raft's handles, and you'll have yourself a makeshift mechanical bull ride in the water.

Bunch O Balloons creator (and father of 8, and superior gene bearer) Josh Malone has invented a hose attachment whose other end is fitted with 35 balloons. Turn the hose on, lower the water's dam, and those balloons will automatically fill and tie themselves in about 20 seconds. To dislodge the lot, gently shake the attachment stem and watch all 35 snap off and delicately drop into your weapons bin, primed and ready for a water fight.

Repeat the process 2 more times and you'll have 105 water balloons in just over a minute. Do some basic math and, yep, it's 100 in 60 seconds. And that's a Bunch O Balloons.

Your biggest concern about the World's Largest Super Soaker shouldn't be that it will get you super soaked upon impact. Because the water jet maker Mark Rober has built this 7-foot H2Ogre to spew is so powerful it can shatter glass, halve an unpeeled banana, and slice straight through a watermelon. (The watermelon gets suckered into certain death again! Background here.)

Upon impact, your biggest concern should be that you end up on your ass, bruised and confused, and wetter from the pee in your pants than the water from the World's Largest Super Soaker.

The Pool Punisher reminds us there are pool floats that mean pool floatin', and pool floats that mean pool business. And this inflatable tank with a built-in water cannon means pool business. The giant pool toy does a decent job of shaping and decorating itself like a military tank ready for battle, and an even better job of taking that battle to water with its "armor": a deep inset seat for a single rider; and a pump action squirt gun able to blast liquid ammo up to 50'.

Nothing like the thought of pelting my friend Cornelius with a SpyraTwo water bullet to get me amped up on this Tuesday afternoon! Well, that and tacos.

The SpyraTwo, a follow-up to the successful SpyraOne, is a German-engineered water battler that replaces the streaming shots of other water guns with a powerful 30mL "water bullet" capable of hitting targets with balls-H2On accuracy from up to 25' feet away.

This cheaper - albeit in construction as well as price - portable alternative to everyone's favorite carnie and Zack-sticks-it-to-Mr.-Belding game (see the Backyard Dunk Tank above) sets up easily in the backyard for Soak 'N' Wet fun during scorching summer parties and negative windchill dares alike. Take aim with a light vinyl bean bag, try not to throw like a girl, and when you hit the bullseye you'll enjoy 5 quarts of water, or Nickelodeon slime if you've got the skills to cook some up, pouring down onto your sitting duck's head.

Must be a slow day because this inflatable shark squirt gun has me right enamored. (And also giggling like a school girl because the first time I wrote that sentence I made a typo and called it the "inflatable shart squirt gun.") Normally when I see a shark I'm afraid it's going to bite my face off, but this shark, despite its nefarious eyes and ominous razor grin, is threatening to do no more than snot me! Ha! I love it! The perfect summer gift for the kids.

ZORBZ are made of biodegradable latex, and achieve their self-sealing claim to fame via Snap & Seal balloon necks. Water warrers hold their ZORBZ upright at the nozzle, filling the balloon to about the size of an orange. Then to seal, they pinch the neck, stretch it slightly, and the water bomb is sealed.

The World's Smallest Super Soaker is fully functional. It holds enough water for about a dozen shots, which it can launch a distance of up to 25'. Two styles are available, the classic Super Soaker 50 and the newer Super Soaker Barrage.

Must be a slow day because this inflatable shark squirt gun has me right enamored. (And also giggling like a school girl because the first time I wrote that sentence I made a typo and called it the "inflatable shart squirt...