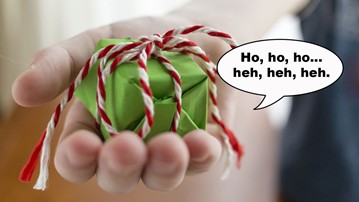 Another way to think of the best backhanded gifts is the best gifts for people you don't like, only sort of like, have a love / hate relationship with, or have a beef with, but who for whatever reason you still have to buy a gift for. In-laws. Bosses. Obnoxious cousins. The co-worker no one wanted to draw in the Secret Santa gift exchange.

True, 'tis the season of giving and goodwill towards all, but...I mean, if you're here, and you've read this far, there's a reason for it. And I'm here to help, not to guilt you into spending good money on a sincere gift the jerkazoid you give it to is just going to throw back in your face / throw in the trash / make some snide remark about / not appreciate in the least anyway.

That's what your naggy Aunt Jan is for.

If you've got unpleasant, inconsiderate, or douchey recipients on your list, give them the gifts they deserve. Here are my picks for the best backhanded gifts.

Note: Gift prices are marked as they were at printing. Prices are subject to change. Also, while the items in this gift list are no joke, the sentiment behind them is. Oh, except the one about the constantly crapping co-worker. Happy Holidays!

The Guzzle Buddy for Your Mother-in-Law

Yep, it's a wine glass deposited directly into a wine bottle for a continuous, 750mL pour. Finally, you'll get a reprieve from filling your mother-in-law's glass with "just a splash" 75 times throughout the night, only to have her start "inquiring" about when you might get a real job so you and your wife can afford to have kids around splash 30.

No Batteries Nose & Ear Hair Trimmer for Your Father-in-Law

Ah, your father-in-law. Always bragging about how he's so low-tech, and complaining that no one does anything by hand anymore. Well. Here's a little manual groomer that should be right up his nose and ear alleys. He can just stick it in his preferred hairy canal, squeeze its wings, and activate a set of blades to rid himself of unruly follicles.

The backhanded bonus for you: trimmer maker Chooling warns it might take some practice to get the tool's position and hair "trap" motion right, which sounds like if you screw you'll get it stuck tangled in a wad of nose or ear hair.

The Rocket Ass...uh, Air Blaster cleans dust and debris out of keyboards, cameras, filters, and any sensitive electronics.

Prank Candle for Your Female Boss

You know she likes to think her sh*t don't stink, but if she leans a little bit closer...and waits an hour...she'll see that roses really smell like poo-poo-oo!

Prank Candles makes jarred delights that smell like apple pie, vanilla, balsam & cedar, or fresh roses...for the first hour of burning. Then. It's the n-ass-ty scent of dirty farts that takes over to ass-ault your boss' snippy, demanding, demeaning, self-congratulatory nasal p-ass-ageways.

In Mommy and Daddy's eyes, Big Bro can do no wrong. And you've spent your life trying to live up to the unachievable standards he's set.

But at least falling short on one of them has left you with no regrets! Sure, your brother may always get the ladies, but does he also always seem to get what the ladies got? Let's find out!

myLAB Box STD screening kits are available with tests for the full gamut of STDs: chlamydia / gonorrhea; trichomoniasis; HIV; HPV; Herpes; Hep C; syphilis; and combinations thereof. They arrive in discreet, unmarked boxes. Collecting a sample of urine, genital / mouth swab, or prick of blood and packing it up to mail in (SASE provided) should take 5 minutes or less. When the lab has your results, you'll get an email with information for secure access.

No reason to knock a girl for being single. Unless. Unless being single is all she talks about. Unless she's a constant source of whining and man-bashing, except when she's directing rage at you for not telling her so-and-so broke up with his girlfriend, and demanding to be hooked up with your single friends.

So sis, you want a boyfriend? Here's the perfect boyfriend. One you can boss around, drag to wine & painting parties, and watch any Ryan Gosling movie you want with.

The Perpetual Disappointments Diary for Your Wet Blanket Friend

...but mostly it's funny because it's true.

What better way to enjoy giving a gift as much as receiving one than to present it to Angry Cousin Al in a Puzzle Pod? This DaVinci Code-style cryptex must be solved before the goods inside are accessible.

Bonus Fun: when Al finally just smashes it to get inside, make sure all he finds is a gift card for $5 towards another anger management training.

This one isn't even that backhanded since, rest assured, if it's always the same guy doing the same thing in the same stall, he's proud of his work, and doesn't care if you know it.

Here Poo-Pourri, the spritz-before-you-shitz toilet spray, has put together a stench-fighting 2-pack ripe for the giving spirit of the holiday season. The Master Crapsman packs 2-ounce bottles of Poo-Pourri's Trap-A-Crap and Royal Flush sprays into a sweeeet toolbox-themed carrier.

You're the boss. And you're a good boss (you think.) And you have good employees. Mostly. But there's this one guy. Comes in late, leaves early, calls in sick when he has to present, always has an excuse. A family emergency. An illness. An overturned truck of salmon blocking his route.

But you can't deny him his bonus. Either legally or 'cause you'd feel real bad about it. And you can't just give him a subscription to the Jelly of the Month Club when everyone else is getting a check.

But you can put his check inside a holiday card that plays Jingle Bells for 3 hours when you open it.

Your holiday bonus: Joker Greeting musical cards don't stop with a tear, a swat, or a stomp. Your recipient will need a hammer to do the trick.

Solo: A Modern Cookbook for a Party of One for Your Recently Dumped Cousin

Because the lady who dumped him is your ex who became your ex after she met your cousin.

Not that you hold a grudge, being a happily married man and all now.

And he's truly going to need to learn how to cook for himself.

Filthy Rich Cocktail Napkins for Anyone...

...who asks you for gifts that indicate they think you're made of money.

Napkins come in $4,000 stacks, or packs of 40. This should get their recipients through at least 3 months' worth of wiping the drool off their faces every time they see a phone, car, console, laptop, TV, pair of shoes, or piece of jewelry they can't have.

If you know a lot of assholes, you know what it's like to deal with their shit. Now, it's time to return the favor. ShitSenders.com enables the shat upon to send steaming piles of Don't get mad, get even to inconsiderate...

Horizontal is certainly my favorite way to do most things, so why wouldn't it appeal to parents too? Horizontal Parenting: How to Entertain Your Kid While Lying Down is a manual for moms and dads who just need a frikkin'...

You Suck At Parking Business Cards

Personally, I think people should be thrown in jail for bad parking. Bad parkers fall into 2 groups... The first, just aren't mentally capable of parking well. And the second just don't give a shit. If jail isn't an option...

How to Survive a Garden Gnome Attack

The 12-inch menaces are coming for you! You might think How to Survive a Garden Gnome Attack is a parody, a humorous manual for the coffee tables of lawn ornament enthusiasts. But consider how garden gnomes have evolved...

The Drivemocion Rear Window LED Messenger is probably legal in only, like, 10 states (I'd guess the spectrally left and right ones, such as Massachusetts and Texas), but for those of you living amidst bureaucratic leniency...

Nom, nom, nom. It's Hasenpfeffer meets the next-generation three wolf moon shirt. Your days of gnawing on leathery old rabbit parts that taste like a combination of barnyard and the positive ends of AA batteries are over...

Why does this ChoClit taste fi-...naaah, I'm not gonna say it. Especially since ChoClits seller Firebox has already done one better than I ever could with their description of what I'm sure is a generally genitally delicious...

What Do You Meme? Game

Elliot Tebele, overlord of the famed Instagram account Fuckjerry, has made a pretty natural transition with What Do You Meme? His images and commentary translate seamlessly from work day slacking reading material on the...