The Best Coolers for Summer 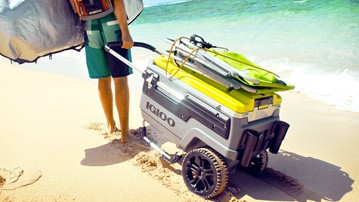 We've had a cruel enough winter, so here's hoping for a cool, cool summer this year, starting with the best coolers to complement your camping trips, picnics, backyard BBQs, and water faring expeditions.

Here's my list of the best coolers for summer.

Note: Cooler prices are listed as they were at printing. Prices are subject to change.

Strong as the Yeti on the outside, cold as the tundra on the inside. YETI doesn't really need my stamp of approval to give it credibility as one of the best coolers out there, but I'm winding up my stamper anyway. The 45 shown here has a capacity for up to 26 cans with YETI's recommend 2:1 ice-to-can ratio.

Keeps the party lit up all night long courtesy of LiddUp technology, a through-ice LED lighting system. Adding nighttime visibility during drink selection and a moody-smooth glow through the cold, LiddUp takes this Igloo from mere ice chest to full-on Party Bar.

I don't have a lot of space for outdoor furniture, so I like the double duty Keter's Cool Bar has agreed to pull for me. Part side table, part - surprise! - cooler, and it doesn't even look big and clunky, or like an el cheapo purchase from a circa 2007 SkyMall catalogue.

The The Classic version of this underground cooler can hold 16 bottles in its aluminum cage frame, and the Little Brother sends up to 8 below grade. Both have a lifting handle, integrated cast iron bottle opener, and top-catching magnet.

To install the Biersafe Classic you'll need at least 45" of dirt in your backyard (or the planting strip outside your office) and for the Little Brother at least 24".

Surprisingly, a smaller, softer-skinned YETI, plus that fact that you'll have to schlep the Hopper solo and slung over your shoulder, does not make it less expensive than the big ol' Tundra cooler. It does make it more portable though.

YETI Hopper coolers come in 20-, 30-, and 40-liter sizes. They're made of a DryHide Shell that is puncture-resistant, leak-proof, and lined with an mildew-resistant anti-microbial interior. Hopper sides have 1" of ColdCell insulation, and the bottom 1.5" that, along with a watertight HydroLok zipper, delivers YETI's trademark longterm cooling without leakage.

Cooler exteriors are made of materials that come from the likes of hazmat suits and whitewater rafts, so they'll be stand up to all the bumps, drops, tosses, fish guts, and projectile vomits after one too many that come their way.

When you're done tearing through trails and drinking up the adrenaline rush, and are ready to chill out at the beach and drink up a cold beer, trade in the ATV for the ATC: Igloo's Trailmate all-terrain cooler. The 70-quart body of this bad boy has been fitted with 10" never-flat wheels capable of rolling over anything from mud to gravel to sand without tipping, busting, or being a general P in the A to haul to your friend Cornelius' house to watch the fireworks on the 4th of July. The cooler's acid-hued dye jobs on top aren't bad either.

Hey dudes, save your wine corks. You might be able to make an $800 cooler out of them. Sovaro has created a line of luxe ice boxes, the haute cool-ture (you're welcome, Karl Lagerfeld) of summer BBQs and days at the beach. But these snazzy black and white coolers aren't deemed a luxury brand just for their sexy cork-lined interiors and chrome and gold trim. Sovaro says you'll see the grandeur in their performance too.

A cooler that's soft and wearable like a backpack, but as high-performing as a hard, boxy, traditional ice chest. It keeps ice frozen and contents cold for up to 24 hours and, when empty, is compact enough to roll up and store in its own stuff sack. For boaters, fisherman, and water sports enthusiasts, IceMule Coolers even float. Available in 10-, 15-, and 20-liter sizes.

These Pelican Elite coolers have 7- to 10-day ice retention properties. That's pretty good. Nowhere near those of my ex, who has retained the ice in her heart for, like, 5 years now, but for a cooler, pretty good.

A direct competitor of YETI, Pelican Elite coolers are suitable for holding everything from picnic lunches to entire fishes of the sea. Pelican also guarantees them for life. For as long as you live and desire to chill things.

No need to weigh down or cramp up your kayak or paddleboard with a cooler when you can raft a CreekKooler to the back and paddle on with up to 30, 12-ounce cans and 20 pounds of ice in tow.

Kancooler's CreekKoolers have streamlined, kayak-like hulls that make it easy to pull behind small watercraft without disrupting your flow. You can also drag them along land, through sand or other dry ground, thanks to a trio of skids on the bottoms. When you're not on the move, the CreekKooler will just bob around next to you, eager to hand out cold beverages from between its dual-wall construction and 2" of insulation. The cooler has an ice retention period of 48 hours, and a 1/8-turn, watertight locking lid seals its contents tight inside.

The Coleman PowerChill Thermoelectric Cooler replaces the mess, heft, and fleeting nature of ice with a simple, trusty, always-at-the-ready power cord to kep 40 quarts of your favorite drinks and snacks up to 40 degrees F below the surrounding temperature. An included PowerChill 12V vehicle plug readies the cooler for road trips and car camping, while a 110V home plug (sold separately) gives you expanded cooling range on the back patio or in the garage.

For the days when it's just Too. Frickin'. Hot. to go outside. Or even get up off the couch.

The Sobro has a slew of gadgety bells (dual speakers on the sides) and whistles (tabletop touch controls for all built-in systems) to complement its central refrigerator door, the latter of which uses a compressor to ensure continuous, even, ice cold cooling of wine and beer. Touch temperature controls allow you to set the fridge at your precise preferred degrees Fahrenheit.

Is it cool enough to be called the Coolest? You decide. After months of anticipation (well, my 6-packs, margarita mix, and I were waiting with bated breath) the Coolest Cooler has finally launched its Kickstarter campaign...

All this cooler needs to keep beer cold is a shovel and 3 feet of ground. So, yeah. Throw one eCool in the bug out bag, Mama! Buried in the earth (and optionally also through a cut-out in wood decking or a concrete patio)...

When you're done tearing through trails and drinking up the adrenaline rush, and are ready to chill out at the beach and drink up a cold beer, trade in the ATV for the ATC: Igloo's Trailmate all-terrain cooler. The 70-quart...

Maybe the best quote a company president has ever made about their product comes from C3 Custom Cooler Creations president, Scott Seljan. In speaking to The Milwaukee Sentinel of his Remote Controlled Rover Coolers, Seljan...

Your wingman for summer has arrived. Well...its crowdfunding campaign has anyway. Like the Coolest Cooler before it, the SunDen hit Kickstarter this week seeking to consolidate and elevate, optimize and smartify all facets...

A can of warm beer, a cooler filled with ice, and a Spin Chill. Put them together and you'll be 60 seconds away from an Ice. Cold. Party. Prefer bottles of beer? Bottles of wine? Teetotaling with the orange sodie? Spin...

Normally I would think something called a Sixer Insulated Jacket would insulate me from the cold. But when outdoor apparel brand 686 teamed up with Pabst Blue Ribbon, PBR had something else in mind. This special edition...

From Coolest Cooler to cooler coffee table. And like its portable predecessor, Sobro has plenty of gadgety bells (dual speakers on the sides) and whistles (tabletop touch controls for all built-in systems) to complement...

Lights...cooler...action! ... Oh wait, don't forget the beats! After all, it's the Frio Color-Changing LED Cooler and Bluetooth Speaker...

Two coolers, folding prep surface, wine rack and drawer storage, rustic wood design--this patio bar gets my gold star of approval. Which it obviously already knows, given that it's gone ahead and affixed one to itself...