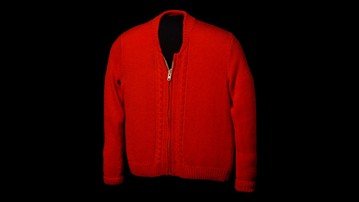 What would Homer give? How about Mr. Rogers and AC Slater? No, this collection of the best gifts according to your favorite TV characters was not written by your favorite TV characters. It was written by me. And while I'm not as ripped as Slater, as neighborly as Mr. Rogers, or as smrt as Homer, I think I did a pretty alright jab channeling these iconic television series stars' on-screen personalities to come up with the list.

From Netflix to networks, today's sensations to classic programming of decades past, here are the best gifts according to your favorite TV characters.

It's all guns, curls, and pleated jeans in the world of AC Slater. Tell your recipient he's on his own to get a perm and hunt down the acid wash, but if he wants to build him some AC biceps and forearms, Fat Gripz are the ticket.

Fat Gripz are a pair of rubber-like cylinders that slide over barbells, dumbbells, pull-up bars, monkey bars, or car steering wheels to thicken them up. Many believe the use of thick-handled bars turbocharges upper body power and muscle development because they require more muscles in the hands, forearms, and upper arm areas to fire during gripping and prolonged holding processes. Fat Gripz replicate the effect of thick bars, but profess to be even better due to their versatility and ease of application.

Bonus: if you're presenting the Fat Gripz to a true Saved By the Bell fan, be sure to sign the tag "Albert Clifford."

The last episode of Seinfeld aired on May 14, 1998, well before smartphones, or even OG cell phones, were in use. But had Jerry owned an iPhone - you know he would have had an iPhone - you can bet your man hands that neat and tidy, but not gay (not that there's anything wrong with that) germophobe would have parked it inside a PhoneSoap at night.

PhoneSoap harnesses the sanitizing power of UV-C light to annihilate germs, as well as the electrical power of electricity to juice up batteries, simultaneously cleaning and charging smartphones.

Used in hospitals and other petri dish-like environments around the world, UV-C is 99.9% effective in eradicating bacteria and viruses from a phone's surface. Inside the PhoneSoap germcubator, this process takes around 5 minutes per phone. Charging ports on the back of the device are USB and USB-C compatible.

Homer might not be able to wait for his steaming coffee to heat up his pink sprinkles doughnut through the vented top "plate" of this nifty ceramic coffee mug, but he appreciates the concept. He also likes the idea that others using the Doughnut Warming Coffee Mug might leave their doughnut unattended while it warms, giving him an opportunity to swoop in and make the swipe.

It's a cured meat tornado delivered every month! If you thought Ron would have suggested a big, fat, raw steak subscription service, well, he would have...if he didn't already buy them all out for himself.

Carnivore Club delivers its members 4 to 6 handcrafted cured meats each month. Faux-wood boxes are filled with artisanal selections from farms around the world, and centered around themes such as French Charcuterie, Italian Salumi, Spanish Chorizo, or South African Biltong. All meats come from ethically treated animals and producers who practice humane slaughtering and use locally sourced ingredients.

Carnivore Club subscriptions are available on a monthly, bi-monthly, quarterly, or one-off basis.

I know Eleven herself prefers Eggos, but it's hard to wrap up a box of frozen waffles and expect it to keep during transport and possibly sitting on a gift table / under a tree for a while.

Second best option: A Silver Dollar Waffle Griddle that makes the same thing fresh, hot, and palm-sized for fast and satisfying hand-to-mouth consumption in the woods.

Sterling Archer doesn't know what this is or what it does, but it has his name on it, so it must at least be a specimen of perfection. "Mmmm, and it smells delightful. Anyone want to do Whip-Its?"

Arya might prefer layers of epidermis to polyester and spandex when she's selecting other people's faces for herself, but when it comes to gifting them to others, it's better to go faux. At least until your recipient has gone blind, become no one, and served his or her time with the Many-Faced God.

These Faux Real Face Masks don't depict anyone famous (though one looks like a lot like Sylar from Heroes) but will still weird people out with their detailed printed likenesses of an old man, an old lady, a hipster dude, and a crazy MF. Masks are made of a polyester / spandex blend, so, like yoga pants, they will hug your every curve for a contoured fit and hyperrealistic look.

"'Ey. How you doin'? ... Great, I'll catch you later after me and my boy Chandler take a double-top-grain-leather-with-memory-foam-padding nap."

Aaand a lady's lady bits between his fingers.

But, funny, even though the cigs are the ones that cause cancer, it's the booze and the affairs that always seem to get him in trouble.

So with his gift recommendation, Draper plays it Madison Avenue safe with a sleek open-flame lighter from Knnox. The flame flicker pairs a mid-century modern aesthetic with a construction that's all 21st century: precision machined from raw solid brass; and engineered to shoot its flame out the side, so you can both lick your target straight-on, and set the ignited lighter down on a flat surface.

It's a beautiful day in the neighborhood...but still a bit nippy. Do yourself a Fred Rogers favor: take off your jacket and loafers, and replace them with some cozy sneaks and a comfy cashmere-wool blend sweater. Any color will do, and if you prefer a cardigan to a zip-up, or a zip-up to a cardigan, well, that's just fine because, "One of the greatest gifts you can give anybody is the gift of your honest self."

"Open. Open. Into the hangar! There you go." Broccoli was a new food for Kevin on season 7's Ultimatum episode of The Office, but he tried it. He tried it because he made a New Year's resolution to eat more vegetables...