The Best Gifts for Foodies 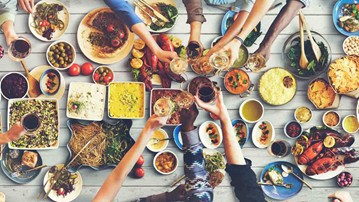 Here I've done a deep dive into the best gifts for foodies. If you're wondering if that applies to you, if you've got true foodie friends and family members, here's a little quiz to figure it out.

If the answer to 1 or more of the above questions is "Yes," you've got foodie on your hands.

And I've got the best gifts for foodies for you.

The Imperial Spherificator. Sounds like something you'd find alongside Mega Maid in Lord Dark Helmet's cache of planet-destroying weapons. But in fact, this superbly named device isn't meant for destruction or Mel Brooks parodies at all. The Imperial Spherificator is meant for your kitchen, and for turning nearly any food you throw at it into delicate and pristine little edible...balls.

"Tastes good on everything!" Normally when a condiment makes such a claim I'm skeptical, but this condiment is Momofuku Ssam Sauce. Made by chef David Chang, founder of the Momofuku Korean-inspired restaurants, and really a whole culinary brand, this is some Momofuk-in' ssam good stuff. It really does taste good on everything. Meat. Rice. Ramen. Eggs. Pizza. The palm of your hand.

The base of Momofuku Ssam Sauce is a current food favorite, Korean gochujang. Gochujang is a savory-sweet chili paste of varying degrees of heat. You can get your Chang-kissed ssam sauce in Original, Smoky, or Spicy flavors.

A nice little stocking stuffer, a thing to tie up with the bow on top, and a gentle way to roll your eyes at your foodie friend. In restaurants where it seems more important what your food looks like than what it tastes like, chefs use food tweezers to handle delicate ingredients and shape works of art on their plates. Foodie home cooks can use this set of tweezers to drive all their hungry guests crazy as they fiddle around with the placement of microgreens and fennel fronds on the chili.

Even non-foodies like myself go cuckoo for these cocoa-colored mushroom puffs. But morels, whether fresh or dried, cost a wad, so most of us wouldn't spring for them. Unless! We need to buy a really nice gift for a foodie buddy.

Check out this 1.5-ounce jar from Vigorous Mountains, and then hope your friend invites you over for some morel risotto.

For most of us, balsamic vinegar, made from cooked down and fermented grape must, is an ingredient in salad dressing. Part of a glaze. The brown-black thing that doesn't mix with the olive oil during bread service at an Italian restaurant.

But for foodies who know balsamic, this is a vinegar as variable and complex as that other thing they make from fermented grape must. Here you see a high-end balsamic from Acetia Rossi Barattini, a family producer from acclaimed balsamic region Modena, Italy. In Modena, there are only 2 grades of the vinegar: 12- and 25-year. At 25 years old, you could probably enjoy a drizzling of this aged balsamic over vanilla ice cream instead of hot fudge.

OK, so maybe Under NY Sky Aprons don't just look like they're made for hipster foodies.

In Fall 2018, Salt, Fat, Acid, Heat author Samin Nosrat debuted her foodie-friendly Netflix series of the same name. Both the cookbook and the show have gotten terrific reviews.

In Salt, Fat, Acid, Heat the cookbook, chef Nosrat shows readers how to become worthy home chefs by nailing what she calls the 4 components of cooking that really matter. Fat makes flavor, salt enhances it, acid adds balance, and heat determines what texture the flavor will take.

"Throw another lager on the fire," says the Beer Caramelizer. Yuk, yuk, yuk, a flavor-enhancing campfire tool after my own heart.

While on the surface heating a poker in the 1571-degrees-Fahrenheit center of a campfire, and then sticking it in your beer sounds more like an amateur drunk move than a deliberate action taken by connoisseurs of the drink. But according to the the brew bros who make the Beer Caramelizer, this is actually a centuries old practice they're just bringing back to the bonfire.

Vegetarians and health nuts and foodies, oh my! These Grow 'n' Serve Microgreen Kits will bring joy to the hearts of many a personality on your gift lift this year. The kits come with a planting tray, a choice of nutrient-dense and Instagram-ready greens seeds, and premeasured soil for planting. Time lapse from tilling to snipping the sprouted microgreens is just 10 days.

Formerly giant, cumbersome, and expensive temperature-controlled water bath machines suitable really only for professional kitchens, the past few years have seen several attempts to make the immersion circulators smaller and more accessible to home cooks. Because not only do people swear that meat, fish, eggs, and vegetables taste a million times more juicy and texturally perfect when cooked in a bag underwater, but once you have a reliable sous vide machine, executing the sous vide method is kind of a piece of cake succulent, edge-to-edge-even 125-degree steak.

Chefman has simplified sous vide for the home with the stick you see here. It sits inside a water-filled pot or large container you already own, and heats the bath up to the exact temperature you'd like your food to be when you eat it. Then it gently swirls the water around to maintain that temperature for as long as it's submerged.

I don't know how you feel about pork rinds or cracklings, or snacks that describe themselves as "artisanal," but I tried paleo and keto diet champion brand Epic's new artisanal pork rinds a few weeks ago, and they were porking deee-licious.

I can't speak to all of the Epic flavors, I've only had BBQ and Sea Salt & Pepper. BBQ: 7/10. Sea Salt & Pepper: 70/10. Yes, seventy. I mean, I inhale entire bags salt & pepper kettle chips and salt & pepper peanuts too, so obviously it's a flavor that pleases me, but the specific recipe, the seasoning ratio, and the introduction of puffed meat enhancement to these crunchy carb substitutes puts Epic Pork Rinds on the top of my snackability ladder.

8-ounce jars of Duck Fat are just one of your choices in Fatworks' line of animal fats for cooking. Committed to ending what they consider an unmerited war on fat, the self-described "Fattitude Adjusters" at Fatworks also produce oils including Beef Tallow, Pasture Raised Lard, Leaf Lard, Chicken Fat, Lamb Tallow, and Goose Fat. These real, natural oils were staples in our diets up until the early- to mid-20th century, and some contemporary research suggests they never deserved the bag rap they got during the margarine and vegetable oil craze, and that many of us still find hard to let go of now.

Promoting an enhanced eating experience, Molecule-R's Aromafork engages a set of 21 different aromas to involve your nose more directly in the tasting process. Foodies will be able to add an olfactive flavor such as basil, jalapeno, truffle, or chocolate to a small chamber at the base of the fork's handle, and seamlessly roll its effect into an entirely different bite of food.

What to Drink with What You Eat

What to Drink with What You Eat is exactly what it claims to be: The Definitive Guide to Pairing Food with Wine, Beer, Spirits, Coffee, Tea - Even Water. My wife owns the book, and it's like her bible. No joke. She'll read about holy merlot before bed, get a few blaufrankisch hallelujahs in when she wakes up, and if we're having a dinner party - it's intense sauvignon blanc spiritual study and exploration of pinot noir for days beforehand.

Who wants a pork chop, a salmon fillet, a bloody mary, or a piece of chocolate cake that tastes like it's spent hours slowly absorbing the apple wood of a smoker? In seconds, and without heat, the Smoking Gun portable food smoker claims it will inject just about any edible or potable with the natural flavors of fired wood goodness.

Ingredients previously ill-suited for sweat sessions in the smoke sauna, such as butter, oysters, meringue, and sushi, seem to take on the savory profile of hickory, alderwood, or any chips of the user's choosing with a quick, cool blast from PolyScience's handheld gun. The process can be executed table-side, underneath a glass, inside a container or bag, or via aerating smoke directly into liquids inside a blender or shaker.

Welp. They're always bragging about how they love all food and will eat anything.

Gastro Obscura continues the epic and offbeat travel book series that began in 2016 with Atlas Obscura. In their latest Food Adventurer's Guide, authors Cecily Wong and Dylan Thuras home in on what is, in my opinion...

All foodies and hungry people know the best way to go through the USA is to eat your way through the USA, and this American Foods Scratch Off Map is going to make easy work for all the big and adventurous travelers with...

The Imperial Spherificator. Sounds like something you'd find alongside Mega Maid in Lord Dark Helmet's cache of planet-destroying weapons. But in fact, this superbly named device isn't meant for destruction or Mel Brooks...

What's that you're eating? Antelope jerky? Pssshh! Amateur. Real men, men with balls as big as their 3 p.m. snack cravings, eat dehydrated zebra tarantulas. Straight from the can...

"Bonne Maman" translates to "Good ol' Mama," and if my mama got me a 2021 Bonne Maman Fruit Spread & Honey Advent Calendar, I'd tell her she's a good ol' mama indeed...

Grow Your Own Escargot Kit

Note: Converting them from snails to escargot is optional. You are welcome just to grow them and name them and keep them as snuggly (with a side of slime) pets. Otherwise: Attention kitchen magicians! If your bag of culinary...

Foodheim: A Culinary Adventure author Eric Wareheim is an actor, director, winemaker, and foodie. But you might know him best as Arnold, Dev's giant "token white friend" in Master of None, who develops a fondness for...

Oh Internet, I will definitely accept these Cookies. If you're a sweet snack monster, and maybe even more so if you're a foodie who needs more than the "C" in "cookie" to make it good enough for you, check out Internet...

Vegetarians and health nuts and foodies, oh my! These Grow 'n' Serve Microgreen Kits will bring joy to the hearts of many a personality on your gift lift this year. The kits come with a planting tray, a choice of nutrient-dense...