The Best Yoga Gear for Men 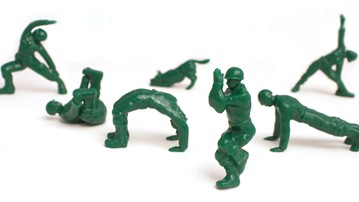 But I know yoga is good. I mean, someone tells me how good it is, and that I "should do yoga" at least once a week, and I bet they tell you the same. Or maybe you're the sage, zen one telling everyone else how you went to a Monday night Vinyasa class a couple years ago, committed to stick with it for at least a month, and can now not only touch your toes, but put yourself in a head lock with your knees.

For all types of men out there, from those considering giving yoga a try, to the baddest yogis in the neighborhood, I've compiled a list of some of the best and most manliest (or at least man-appropriate) gear for your yoga practice.

And if you're just here for the Yoga Joes in the image above, you can find those here.

Note: Yoga gear prices are listed as they were at printing. Prices are subject to change.

The thick foam pad of HemingWeigh's yoga mat gives some cush to the spine, hips, knees, and elbows on hard floors. Especially when you drop a little too hard out of wheel pose, or take an inadvertent dismount from your head stand.

The mat is also generous in size at 71" long x 24" wide, and a pretty good price for a yoga mat. Especially in light of the other suggestions I've made here. The big HemingWeigh bonus for me though is its included carry strap, with is easy to slip on and off and really does make it way easy to transport the mat.

Yoga Crow says their Swerve shorts were designed by Y-chromosome, for Y-chromosomes. Swerve fabric has both flexibility and structure, so you can bend and twist in them, but won't experience the bunch around your thighs during inversions or squats. The shorts are also moisture wicking, and come pre-loaded with special underwear - a non-abrasive, odor-resistant lining styled like a boxer brief.

Susama calls this the "World's Best Yoga Towel," and as an owner of two, I don't dispute the claim. I haven't tried that many different types, but I do like that they have a heavier, flatter microfiber weave that doesn't attract every single pair of my fiancee's underwear in the dryer like some of the lighter, fuzzier ultra-absorbent towels.

If you're doing hot yoga - or just sweat like an ice sculpture on the 4th of July no matter what type of yoga you're doing - and don't like lining your mat with a towel that moves and gets all bunched up during your practice, grippy socks have rubberized dots on the bottom that provide way better traction than skin on foam.

Loose and roomy, now these yoga pants are more my style. Probably not great for hot yoga if you sweat a lot and don't want to add 2 legs' worth of saturated cotton to your inversions and flying poses. But nice for normal temperature yoga, Yin yoga, and sitting on the couch for 6 hours watching the NCAA tournament.

Vaiden adds silver ion anti-odor / anti-bacterial technology to their moisture-wicking, quick-dry athletic shirts. Because no lady likes chaturanga-ing next to a dripping dude who smells like moldy barnyard cheese and makes her feel like she set up her mat in the splash zone. And for that matter, no dude does either.

Don't look to Han Solo to save you from going to Power Vinyasa with your girlfriend. He's stuck in both Carbonite and a yoga mat.

The mat is 5mm thick and reversible. In case the sight of Han in distress ruins the rest of the yogis' Zen and you need to flip him over. It's also moisture-wicking and non-slip.

A $1,000 yoga mat. Made of the same 100% pebble-grain leather as a football. Promoting itself as #BallerAF. Cheers, America, for bringing unchecked consumerism and raw aggression to an ancient discipline of simplicity, peace, and well-being!

Needless to say, Baller Yoga Mats are made entirely in the USA from the same Horween Tanned-In-Tack beginnings as the trusty prolate spheroids used in the NFL. The company says they are superior to traditional yoga mats - yes, there's an actual practical feature or two - because 1) they don't stink; and 2) they don't slip.

Using leather instead of chemical-scented synthetic materials means that Baller Yoga Mats "smell great from day one." According to BallerYoga, they also provide a more reliable non-slip surface without the use of sticky socks, microfiber towels, or Nike gloves. I wonder how many of the NFL's wide receivers would agree.

Drink up & rub down. The MOBOT, or Mobility Bottle, is a clever, clever water bottle whose outer wrap of athletic-grade, firm-density EVA foam serves as both insulation for its contents, and a muscle roller for your body. Take a swig from the MOBOT to hydrate, and then take a spin on it to knead out your knots and fatigue.

Wicks adhesive strips give wearers the functional advantage of acting as a sweat shield, diverting the blur and sting of salty secretions away from your eyes during exercise. And stylistically?

Well, I heard oompa loompas are the next unicorns and mermaids, so with race season coming up, here's your opportunity to be the first on that trend during your next half marathon or century ride. (Wicks also come in Shocking Pink and Neon Blue if you're still not over the unicorns and mermaids.)

If you can get past the fact that they look like the things ladies wedge between their toes to paint them, YogaToes sport gel toe stretchers could make your life from the ankles down a lot more comfortable. YogaToes spread and separate toes up top, down low, and in the middle, pulling them away from the balls of the feet to create increased flexibility and resilience.

For that moment you're in your 75th warrior and feel like you're going to puke up last night's tacos and then pass out. Wrap this 40â€™" x 12" cooling towel around your head or neck to reduce body temperature and wick away sweat.

Sanuk uses real, squishy, foot-contouring yoga mats to make several lines of flip flops for both men and women. I tried on a pair once a few years ago in the company's homeland of Southern California and they were probably the most comfortable things ever to touch my feet. Well, except for that Pomeranian-skin rug and my ex-girlfriend Karen's tongue.... Definitely the most comfortable shoes though.

Sweat it out walking the edge and striking a scissor leg side crow pose in the center of the Levitat aerial mat. This combo fitness tool and lounger latches to 3 points in 3 minutes or less to give you a space to enjoy whatever level of activity and concentration you need all day long.

And if you're not yogi-fied enough to down dog on a suspended triangle, use the Levitat as a hammock and take a Shavasana on it instead.

Who's up for a little downward dog...gy style? These Crotchless Yoga Pants from Cherry ChiChi proudly describe themselves as "yoga pants for sex." Just in case there was any confusion, or a moment's thought that they...

Not sure Matador Meggings are right for you, dudes? Not sure any leggings, even those designed especially for men and their anatomies, are masculine enough for a place on your legs and crotchal region? Well. Matador Meggings...

The 12 Best Home Workout Gifts That Aren't a Peloton

The Soul Seat is for those of you who long to sit cross-legged at your desk. Or in a half-kneeling position. Or with one leg tucked underneath you. Or like you're using a Squatty Potty at your desk. In other words, the...

I must be into predators today. Live Watersports' snake-tongued L2Fish and L4Expedition catamaran paddleboards come hot - no, how about cool and refreshing floating in a crystal clear Caribbean bay? - on the heels of...

If you weren't sweating the Dark Side before, one round with Onnit's Star Wars fitness equipment, and I guarantee you'll start. From kettlebell swings to hot yoga, Russian twists to Turkish getups, Onnit is injecting...

Mmm, spread those sexy toes wide! Not just for my benefit, but for your own. Whether you're into yoga, promoting blood circulation and relieving foot pain after a workout, or slowing down the growth of your bunion, the...

HIIT the yoga mat. A fitness streaming service with in-person studios in Minneapolis, MN and Denver, CO, Alchemy 365 classes combine intervals of strength building moves with bursts of cardio, and bookend them with a...

Unplug and relax in an oasis for one (or 3) or sweat it out walking the edge and striking a scissor leg side crow pose in the center of the LEVITAT aerial mat and hammock. This combo fitness tool and lounger latches to...

Drunk Yoga: 50 Wine & Yoga Poses to Lift Your Spirit(s) isn't just a parody or tee-hee-hee wine gift for women and bachelorette parties. It's a legit guide to doing yoga while drinking wine, and it's based on author Eli...

OmniBalls make 'em better. Pushups. Planks. Pilates. Kegels. Well...at 4 pounds and, like, 6" in diameter each, OK. Maybe not Kegels, ladies. But incorporate the 360-degree rolling strength trainers into hundreds of other...