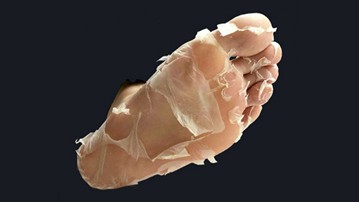 Let's be clear: these so-called "weirdest men's grooming products" wouldn't make a single lady flinch. They could never touch the bizarre and freakish tinctures and tools women use to groom and beautify themselves (see: Pinky Queen nipple lightener [NSFW].) But for men, this collection of beard and mustache, face and foot, and hair up top, and hair down there products are...a little different. In a good way.

Well. Depending on your definition of "good."

Here are my picks for the weirdest men's grooming products that actually work.

Note: Grooming product prices are listed as they were at printing. Prices are subject to change.

Entrepreneur Max Valvarde's Morninghead stylist is a cap lined with a proprietary, super-absorbent cloth material that drinks up a few ounces of water, and distributes them evenly across its surface. Users can then put on the Morninghead like a shower cap, scrunch the water through their hair, and easily ready tresses for smoothing. No more sopping wet follicles, no more water oozing down your face and onto your clothes, and no more bending over and risking a concussion. It's like a ShamWow! for your head.

Indian healing clays aren't anywhere near new, but they might be new to your radar, as they were to mine. They're centuries-old beauty solutions for fighting acne and assuaging skin irritations. Supposedly, similar bentonite clays were used by Cleopatra, ancient Roman spas, and people from France, such as the priest Kneipp and the Conehead Beldar. This particular brand hails from the prolific Aztec population living in...uh, California's Death Valley...and is sun-dried for up to 6 months to turn it into the powdered form that gets packaged for use in facials, body wraps, clay baths, foot soaks, insect bite and poison ivy treatments, and chilled clay muscle recovery packs.

The mustache guard isn't so much active grooming as it is preventative maintenance. It's like an umbrella for your face. The best dam invention for keeping your whiskers dry.

Sie the MoGuard over a pint of beer (or milk, or triple mocha with extra whipped cream) and prevent the liquid's foamy head from sticking to your 'stache. This shielder of lip hair can also slip over glasses containing non-foamified drinks, such as Old Fashioneds and Grape Fanta, just to help keep follicles clean and dry.

Elephant Ear, which looks like a bottle of Windex with a hose for a spout...oh wait, it's a trunk! Ha! I figured it was called Elephant Ear just because it's for people with elephantine quantities of wax clogging their canals, but this makes the name doubly awesome!

So the Elephant Ear bottle system has a trunk that inserts into the opening of a waxy ear and then guides the flow of a peroxide and warm water solution into it. Users should tilt the ear getting ear-igated towards their shoulder and hold, or have their friend Cornelius hold, some sort of catch basin underneath the earlobe to catch the water that will trickle out. As the bottle empties, it will draw up wax deposits and drive them out of the ear as well.

The BaKblade 2.0 is an update of the original, with a curved, more ergonomic handle, and flexible razor design. Razors themselves are made specifically for shaving back hair, so a little less aggressive since those follicles tend to be a lot less coarse than the ones on your face.

BaKblade compares shaving with a 2.0 to using a back scratching tool - hold it with the teeth facing your skin and drag it lightly across the overgrown areas. There should be no pulling or discomfort, and no stubble left behind.

Willy Care says their down-there grooming kit provides all the tools you need for a "quick spit and polish." (I wonder if it's as quick as the other kind of spit and polish my willy enjoys.) These tools include:

Bushbalm softens, scents, and spruces up pubic hair with natural oils and fragrances subtle, classic, or exotic. It can also help prevent and soothe ingrown hairs, reducing redness and irritation with the use of Jojoba and Tea Tree oils. And! Bushbalm is unisex, so ladies, you can use the mixture on your glorious crotch 'fros too. And! Both men and women who go for the Brazilian bare look will find the same Bushbalm properties that keep their nether regions clean and chill when grown out work just as well on a frictionless and follicle-free surface.

Dudes, Menaji's CAMO Concealer for men will cover zits, dark under-eye circles, razor bumps, scars, and age spots to make you look like a pretty pony. With a side of fragrance-free so you won't smell like a pretty pony who's been nosing through his girlfriend's makeup drawer.

CAMO Concealer comes in 6 skin tone colors to match a full spectrum of male complexions, and stores in a lip balm-sized stick applicator in case you want to take it with you for post-makeout or post-nervous sweat touchups.

I don't know what medieval witch magic Baby Foot puts in their Exfoliant Foot Peel to produce the skin-molting effects you see before you but, even though it would make perfect sense here, I promise you it's not snake oil. Have a look at the ingredient list yourself. My girlfriend says two near the top, lactic acid and glycolic acid, usually show up in her face peels, but...damn. If her face peeled off like that I'd tell her to go back to Jaqen.

Whatever Baby Foot brews in their solution that, 5 to 7 days after you apply it, makes all the dead skin on your feet peel off in sheets, it's no joke. There are literally thousands of reviews of this foot beautifier, from all kinds of men and women, and dozens of customer photos showing sickly fascinating individual results.

I also...uh...did my due diligence...and tried it myself. And all I can say is, happy picking!

According to the Scruffie leg and neck shaver, "The Scruffie is a shaving tool that allows you to shave your legs and back of the neck." My question is: but is it? Is this razor with a hydra's worth of heads really going...

Aside from the fact that the Wahl Peanut Hair & Beard Clipper looks as much like a nutsack as it does a peanut, have you ever seen a better Father's Day gift for Dad? Or better, Grandpa? Dude, one constant in my life...

Men, are you tired of spending precious minutes in the morning grooming and edging your perfect specimen of manliness (well, the one on your face anyway) only to end up looking like your 6-year-old shaved you after you...

If your name isn't William, and you don't need a gift for a dude named William, I can't imagine why you'd buy a Willy Care grooming kit. I mean, I know it's a common name and all, but are there really enough Willies out...

Japanese grooming brand Nikken Razor Co. has developed some tweezers specifically for ear hair. And they're not calling them Twearzers. In fact, it doesn't look like they're calling the coiled spring follicular grippers...

I'm gonna start the New Year right, with a resolution to Takumi No Waza Green Bell Nail Clip my nails when they get too long or split, instead of biting the shit out of them...

They say it's like an umbrella for your face. And also that it's the best dam invention for keeping your whiskers dry. The Whisker Dam sits over a pint of beer (or milk, or triple mocha with extra whipped cream) and prevents...

I'm only telling you about a $199 razor because it used to cost $100,000. So they say. And also because they, the creators of Zafirro, also say their razor's sapphire blade make it the World's Sharpest, and longest lasting...

If you're a man who thinks of his bathroom as his other office - or his king's chambers - why shouldn't you have a wish list of goods and supplies...and a luxury bathtub or two...you'd like to see inside it? I can't speak...

Um, is that McDreamy hawking the Stubble Buddy beard and manscaping vacuum? If so, sorry this is what life dealt you after the Grey's Anatomy kill-off...

Snake oil? No Way! Beard Grow XL isn't oil at all. It's pills! Ninety little capsules whose daily dose claims to carry the coveted effect of a full and glorious facial bush that's sure to rival the one on Santa himself...