Things That Make You Go Awww 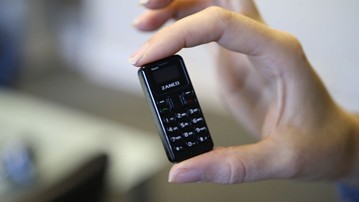 While cute 'n' cuddly 'n' precious isn't normally my jam around here, over the years I have found some products that are more awww-inspiring than awe-inspiring. I figured, for your guilty pleasure of the evening, I'd put 'em all together and give you a little overdose of sweet, charming, and downright adorable.

Enjoy my compilation of things that make you go Awww.

Relive your days of collecting caterpillars in bug houses and - admit it - fading into dreamland snuggling a full-size Glo Worm in the 80s - with this ultra-mini version of Hasbro's light-up plush toy. Hasbro calls it the World's Smallest Glo Worm, and while I'm usually skeptical when someone deems something they've made the World's Smallest / Biggest / Best / Sexiest, I believe it here because Hasbro is the Glo Worm's manufacturer and owns all the licensing rights to deciding how small the smallest Glow Worm in the world is going to be.

I think I have juuust enough room for a DASH Mini Toaster Oven on my desk at work. It's got a perfect 9" footprint on the outside so it's great for small spaces, and I'll bet it's bigger on the inside for cooking, like, 16" pizzas and whole turkeys and...no? Smaller on the inside? A piece of toast, a bagel, maybe a lone chocolate chip cookie? Huh.

Awwwww. Just awwwww. What a pwecious wittle burger. Handmade in Ireland from felt (not sheep's wool as I was hoping) with the tiniest of adorable details, including sesame seeds, sliced onion (bah! Sacrilege!), tomato, lettuce, cheese, and a burger patty with the zip running through its center.

Not only is a polar bear ice cube tray adorable and perfect for soothing the injuries of children who hurt themselves doing something stupid that you told them not to, but the design itself is also highly utilitarian, solving two very irritating ice tray issues. 1) No sloshing or mass spillage transferring the liquid-filled mold from the sink to the freezer. 2) No more dropping and dumping cubes all over the green earth while attempting to dislodge them post-freeze.

The smooshy shark or the poofy puppy: I don't know which is more adorable, and therefore most responsible for my urge to slap it in the face. Can any woman look at this dog without longing to hold it in her arms? Can any man look at this dog bed without contemplating how comfortable it would be as a 360-degree pillow for himself?

One discerning observation the Japanese have made is that Americans don't eat enough pandas. And while bureaucratic export regulations and some malarkey about endangered species have prevented them from selling panda meat on Amazon, I think this precious Pan DE Pop! Up! bread cutter is a decent alternative.

The Le Koroc tiny house boat is exactly how it sounds: a tiny house built on a boat. More specifically, it's a single-structure piece of construction, assembled with laminated white cedar beams and ultralight plywood, set atop three 50 / 52H32 marine grade aluminum / magnesium alloy tubes with 4' sealed chambers. When asked how it feels about this new, water-based arrangement, the house said, "I'm on a boat motherf**ker!"

The process takes several weeks, and all stuffed animals are handmade based on photos you upload of your pet, and unique characteristics about him or her you report with the submission. You can also choose how you want your Cuddle Clone positioned.

Life-sized is still a few feet away, but this giant Chewbacca plush toy measures in at a formidable 24" tall x 15" wide. Which is probably bigger than the kid you're going to pretend you're buying him for. And when you press on his stomach, he growls. With Chewbacca by your side, your days of flying solo are about to turn into days of flying Han Solo. Yo, Chewie! Fire up the Millennium Falcon!

Uh oh. Mr. Sloth dozed off with his ass hanging in a cup of boiling water. And, mmmm, in contrast to skunk ass, sloth ass smells amazing. Like peachberry jasmine sutra. Or is that tranquil strawberry dream?

If the sight of a Shiba Inu makes you just want to squishitsface, well, how about sparing the dog's dignity and ability to breathe, and taking out your cuteness aggression on a set of Shiba Inu Dog Marshmallows? Come on, you have to admit, they're just as adorable as the real thing.

And the marshmallow versions are filled with chocolate and sweet azuki bean flavors!

The tiny t1 is a mobile phone smaller than just one of the thumbs I'm holding up right now to show my approval of it. Creator Zanco has crowned it the World's Smallest Mobile Phone and, unlike the World's Smallest Violin, I think the tiny t1's title is legit. Especially since this itty bitty telecommunicator is fully functional for talking and texting.

Emoji-bowls might be the best way to describe Tassen's expressive line of cereal and ice cream bowls. The dishes, sold separately here, come in a few different sizes and several emotive characters sure to make you smile as you eat your morning Lucky Charms or after-dinner Mocha Chip.

The Tassen bowls could also make you laugh hysterically or freak the F out if you use them as a munchie vessel after a few rounds of Volcano.

Godzilla and his hot, humidifying breath are coming for you! You and your flu season and your flaky skin and your dried-out sinus passageways! Arid climates can run and winter chills can hide, but none shall escape the Godzilla Humidifier!

Part musical instrument and part toy, Otamatones claim to be easy for all ages to pick up and play, though I'm sure a good bit of practice is necessary before you can get Oto-Ninja or Oto-Kabuki to pitch out the greatest hits of the 80s. Otamatones come in a ton of different characters, as well as less amusing plain colors, and sound almost as endearing as they look. A little like less annoying bagpipes.

For those who haven't made the connection, remember, llamas spit to protect themselves. So the decision to turn this camelid's form into a pepper spray canister isn't just a swell idea because Pepperem knew it would go viral with the ladies and the dudes who need gifts for girlfriends, it actually has a biological basis. And if this little white llama didn't ring your adorability bell hard enough already, check it: when you want to make him spit, press the red tab on the back of the llama and he'll open wide before hocking his blinding loogie.

Why you gotta taunt me, Corgi Butt Leggings? Like I don't want to pet, pat, and smack my wife's ass often enough as it is. Especially now that we're sheltering up in place, so it's within about 50' of me 24/7. Adding...

Damn you, Double Succulent Planter Swing! I woke up this morning to my cat playing bongos on my forehead, followed by my mama calling me at 6:45 a.m. saying I need to come fix her internet because it's "broken." And I...

iFu calls the design of their Mini Electric Screwdriver "exquisite," and while I think that word should be reserved for old wines and revenge tactics, I will concede the aluminum alloy metal shell, one-piece molding...

Ha! It's A DIY clown car! Except the P.50 isn't clowning around. Builders of car kit, available in electric and gas models, will find themselves the proud owners of fully functional examples of the World's Smallest Car...

I never thought "short" and "stubby," especially used side-by-side, could be such a compliment. But the Short Stubby Screwdriver from Gato Tools is a double-ended, rotund-centered beauty I'd screw with in a second. And...

The M5 Titanium Nano EDC Blade is tiny, tactile, and ready to tackle tasks by the ton. Or at least, like, the handful, but that ruins my wordplay. A new issue from Gadget Master, the M5 is a fetching stainless utility...

This Mini Knife Set probably won't be your most useful piece of EDC, unless your goal with EDC is to be able to whip out implements that make the ladies go, Awww. ... Uh, implements not permanently attached to your body...

New to my list of Things That Make You Go Awww: the Beretta Signal Set, a 2mm pinfire gun that, despite its miniature status, shoots more than just a flag that says Bang!...

Diamond Edge Knives' handmade D2 steel wrist knife is intended to be a mini blade always at the ready to assist with hunting, camping, and survival pursuits. But. I mean. Even tucked inside its hand-stitched leather sheath...

Tiny, mighty, lasts all night, and whether upside down or underwater, is always ready to go. And that's just the tip - the silver tip - of the ForeverPen, a new super tiny inkless pen from World's Tiniest...