Things That Make You Go Hmmm 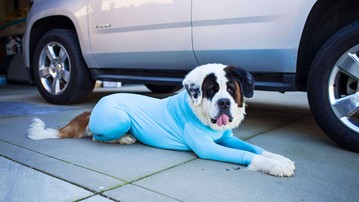 Weird, wonderful, and wacked out is one way to describe these items. Another way: things that make you go Hmmm. Who made that? Who thought of that? What is that?

Well. There might be only one or two real wants on the list (hint: merkins.) The rest are just products to ponder or scoff at. To hem, haw, and hmmm about.

Tyson Walters originally developed the Shed Defender for his St. Bernard, Harley, who was shedding like a...St. Bernard...all over the place. After a few iterations based on the first one his mom sewed for Harley, Walters felt he'd perfected the cut and fabric for a leotard-like suit that would contain the dog's fur effectively for the owner, and comfortably for the dog.

When dogs wear a Shed Defender, the fur that would normally spread from their coat to your carpet, couch, and car seats remains locked inside the suit. So too do any canine allergens and dander. If you're having guests over with fur sensitivities, or just don't want to vacuum out your car every time you take Darby to the dog park, a Shed Defender is a pretty easy and cheap way to quarantine the problem.

Stripes or solids: what kind of panties make you want to make it rain? Aside from my girlfriend and my mama, I wonder how many ladies would slap me if I walked around town with a plaid upskirt shot printed on my umbrella.

NakeFit stick-on shoes - or, to be more precise, NakeFit hypoallergenic adhesive pads - remind me of when I'm walking barefoot and start to feel like something's stuck to my heel, but I'm loath to look down because I just know it's going to be someone's dirty old Band-Aid. Except with NakeFits the thing stuck to my foot would be supposed to be there. It would also be helping to protect me from the dirty old Band-Aids in my path, along with any sharp objects and fungal infections looking to latch on to my feet too.

Designed, like all fine shoes, in Italy, NakeFit adhesive pads look like a cross between an insole and a tray of paint you accidentally stepped in. According to the team that created them, the barefoot enablers stick on and peel off your foot easily, and stay firmly in place, ready to provide a bevy of services during your wear time in between.

Just when you thought your Cup Noodles and microwave Ramen couldn't get any sexier, the geniuses at the Japanese brand FuRyu went and made this series of instant noodle lid stopper figurines. The ladies range in appearance from sexy and innocent to sexy and playful to sexy and devilish to sexy and Yes, Mistress. Your slave will not remove the lid on his Spiced Chicken Cup Noodles until the contents have adequately cooked.

How do I buy my wife an anniversary gift that tops a Sloth Ring?

This pendant is a delightful depiction of a great white shark harnessed to a trio of red balloons, both of which will dangle from a silver chain. You'd think the shark would be none too happy about his transfer from water to air, but the expression on his face looks less like an I'm-gonna-eat-you-limb-by-limb and more like a Weeeeeeeee!

Boobies and butts, butts and boobies! Now pickled for your gustatory pleasure!

No, not really for your gustatory pleasure, for your viewing pleasure only. These jars of pickled butts and pickled boobies (and pickled people heads if you're super weird) are not edible. And not made of real butts and boobies either. Red Vessel Designs weaves, puckers, cracks, and nipples them out of some kind of textile, and then smooshes them together in jars to create the perfect novelty gift for your favorite ass man or breast man. (Or super weird decapitated head man.)

Oh the fun you could have using some of Katerina Kamprani's Uncomfortable designs to mess with the new guy at work. Ask him to water the plants. Invite him to the break room for a slice of pie, served up with ice cream and a chain neck fork. The Uncomfortable is a series of "deliberately inconvenient" everyday objects the Athens-based architect has created to show...how mean she is.

And make you and I go Hmmm.

First published in 1981, the radically strange and unparalleled Codex Seraphinianus took Italian architect, illustrator, and industrial designer Luigi Serafini 2-1/2 years to complete. What is it? Aside from floating in the general sphere of "art" no one really knows. The nearly 400-page book's illustrations are only slightly less inexplicable than the unknown language that accompanies them. While oddly captivating, and possibly the Most Interesting Coffee Table Book in the World, trying to decipher and understand the Codex Seraphinianus has long been an exercise in futility.

Thorns In meaning #1: Ten thousand mic-rose thorns lining the inside of this shark skin glove. Thorns In meaning #2: Ten thousand mic-rose thorns gouging fish-hook style into the hand of its wearer, such that pulling the glove back off also means pulling a layer or two of skin off with it. The piece is recommended for philosophically-charged art and oddity collectors, the S&M crowd, and individuals whose intelligence is inversely proportional to their bank accounts.

Icelandic design firm Sruli Recht conceived and fabricated the thorn-lined glove with an exterior consisting of laser-cut Icelandic basking shark skin fused partly by hand-held needle, and partly by a Pfaff 1445, which I'm pretty sure is some sort of electric eel. Sruli Recht caps its Glove of Pain and Asset Misappropriation with the words, Lethal lethal, my right fist and its sequels. I don't really know what that means in this context, but it sounds frikkin' cool, and is definitely what I'm going to say instead of Thank you when I leave the checkout at the grocery store from now on.

Made of fresh Wisconsin pine, a sustainable resource that may also help drown out the smell of rotting flesh if you finish building your own casket, but don't quite get around to digging your own grave before you need to lie in it!

Dude, a build-your-own casket kit? I didn't think there could be a more depressing DIY project for a sunny summer weekend than sealing off rodent access holes in my mama's crawl space. But I guess at least if I build my coffin myself, I'll be able to customize my final resting pad to my exact specifications.

I'd say a Custom Shrunken Head Replica would make a great revenge gift for a frenemy, but given its cost and, more importantly, sheer awesomeness, I think I'd like one of Supermongrel Studios' ultra-realistic tribal trophies of and for myself.

Or maybe for myself, but of my ex-girlfriend Karen, who surely would have her head shrunken for real if she lived amongst the Jivaroan tribes in the Amazon. I could hang the replica from my rearview mirror to ward off break-ins, as any person who came face-to-face with an even scarier version of that evil scorpion of a woman would never come near another 2019 Porsche Panamera again.

The Happy Half Pint Glass is the perfect gift for the beer lover...the beer lover who maybe loves beer a little too much. Who maybe needs to cut back a little. Say, by half.

Part optical illusion, part gimmicky "redesign" of your favorite brew-bearing vessel, the Happy Half Pint Glass holds exactly 8.4 ounces of beer. So when topped off your pint of Guinness will always be half full. Or, more likely, half empty if you're the one who has to drink from the Half Pint while everyone else gets a real glass.

Talk about lighting that makes a statement, sets a mood, and shows up all your friends with bass, elk, and golden retriever taxidermy.

Skinned cod fish, or Uggi, lights are the fantastical creations of Icelandic artists Dogg Guomundsdottir and Fanney Antonsdottir. The two skin and clean by hand fish measuring anywhere from 28" to 39" and, after allowing them to dry and shape against molds, turn cavities that used to be filled with guts and entrails, into luminescent works of art. The process takes up to 3 weeks.

An apple a day keeps the doctor away...unless you use your apple to catch the ashes of your pack-a-day habit, in which case you'll probably end up a favorite of both the doctor and the grim reaper.

Gotta love the irony of an Apple Ashtray.

Did you know crotch wigs have an official name besides "crotch wigs?" According to crotch wig maker The Original Pussycat Patch, they're called "merkins." Merkins! It sounds like a new breed of little creatures created for Disney's next Pixar movie. I guess here though, rather than looking like personified cars or emotions, or a family of superheroes, the characters would look like a tribe of animated...bushes?

Too bad Mother's Day is over. One of Lucky Stradley's snotting ceramic yarn bowls (this one above is named "Witt") would have made the perfect gift for Mom...

Grab a Taco Holder Butt Plug and run for the b...ack door. I should be all Borat "I excite! I excite!" about Etsy shop Glow F**k Yourself's fetish toys - sex and tacos might be my two favorite things on Earth. But somehow...

Things That Make You Go Ewww

Take a quick scan through this collection of things that make you go Ewww, and see if you can pick out a pattern. Or maybe it's better to say pick out, pop out, suck out, blow out, or stroke out pattern. Any guesses?...

18 Fun & Quirky Gifts Everyone Will Be Talking About

Some of these 18 fun & quirky gifts everyone will be talking about could double as White Elephant or Dirty Santa gifts, but most are legit presents for the holidays that are just a little less mainstream. And while you'll...

From Delightful to Disturbing: 15 Personalized Gifts

Can you smell what The Rocktopus is cooking?! Mmmm, pulpo a la plancha...

Duck with a D*ck

Rubber Ducky, you're the one / you make bathtime so much...yeeearrrggghh! WTF was that, Rubber Ducky? This is bathtime, not hey diddle, diddle, duck in my bunghole time! A duck with a dick?! Do ducks even have dicks?!...

Who needs a Tactical Belt-Mounted Egg Holster? I'll tell you who. Tired of working his cottontail off for weeks decorating eggs in elaborate patterns all the colors of spring, only to have a good third of them break before...

Link flip-shoes, a hybrid their makers call "free like a flip-flop, safe as a shoe," are here to prove you wrong about at least one thing: no matter what you thought about Crocs or Keen Uneek monstrosities, Redneck Boot...