What You Need to Host a Badass New Year's Eve Party 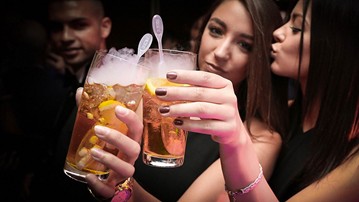 Think of this as what you need to host a badass New Year's Eve party in addition to your 2 primary ingredients of booze and food. These 2020 NYE party supplies fall into 6 major categories: food, as in food prep or service items; drinks, as in drinking vessels or accessories; decor; music; games; and general entertainment.

Ready or not, 2020 is coming, and if you're hosting a party to ring it in, better make sure you have the party supplies you need to make New Year's Eve 2019 worthy of the new decade that will follow it.

New Year's Eve party supply prices are listing as they were at printing. Prices are subject to change.

The LED bulbs achieve their 3D fireworks effects with an opaque exterior coating broken up by more translucent flecks. When the light shines through, it's diffused into a burst of spectral colors reminiscent of the celestial discos we love so much.

I'm not much of a singer but I do enjoy going to the karaoke bar and singing Clarence Carter's smash hit "Strokin'" for all the ladies every now and again. Seems like I'm always one upped by a stocky guy in a flannel shirt and yellow puffy vest though. That dude sings "Alone" by Heart. Like, better than Heart. Mouth wide open, veins popping out of his forehead, beads of sweat accumulating on his logger's beard. I can't compete.

So best case scenario someone has a New Year's Eve party with an at-home karaoke machine set up and no dudes in flannel shirts and yellow puffy vests on the guest list.

Make that Cards Against Humanity, plus any and all of its official and unofficial expansion packs.

What a crock of sh...azam! Piping-all-night dips, steaming appetizers, even hot roasts in waiting. Slow cookers have always made cooking for a crowd easier, and now I see Tru has heightened their hosting efforts too with this buffet-style trio.

Each unit has its own heating base housing a 2-1/2-quart stoneware insert, and individual heat controls with settings for low, high, and warm. A lid rest and serving spoons are also included.

Say "Happy New Year!" to the tune of a hacked-off head of a bottle of bubbles.

Fox Knives calls their Champagne sabres "Sciabola del Sommelier," the Italian translation of Champagne sabre, not because they're pompous wine snobs, but because all of these dramatic bottle beheaders are handcrafted in Maniago, Italy, and they speak Italian there. For its part, the town of Maniago is known for the smithing and production of steel blades used in all kinds of sharp tools, such as knives, scissors, and shears. The swords here come with your choice of nickel or bronze finished hilt, and a black lacquer wooden display stand. They also ship in a wrapping paper-ready Champagne crate for easy gift-giving.

I don't know exactly what will put you and your guests on a "New Year New You" sort of path, but a product with the word "Magical" in its name sounds like a pretty good place to start.

MagicalButter, or MB2, is a kettle-sized device that extracts the THC from cannabis (plus botanicals from other herbs if you're into that sort of thing) and incorporates it into base ingredients for elaborate feel-good drinks, entrees, and desserts. Or just a nice piece of feel-good buttered toast to nurse your NYE hangover.

In a few simple steps and the literal push of a button, the cooker's micro-processor controls will draw out the herbs' botanicals and fold them into butter, oils, and alcohols in as little as 2 hours.

No, this is not a life-size African bush elephant, but at 10' long and 7' tall, calling this inflatable replica of nature's most majestic beast "life-size" isn't an exaggeration.

And the best part: as long as you weigh under 200 pounds, you can mount and ride your PVC pet Ellie.

No reason to mince words when it comes to protecting the 300-pound cherry wood table you just bought off Craigslist. Don't fuck up the table, Cornelius! It's a fine piece of furniture that deserves better than a surface full of rings and discoloration from your sweaty peach martinis and Midori Sours!

Don't Fuck Up the Table Coasters are crafted as fine as the message they communicate - carved from baltic birch wood, and hand stained and laser etched. Each measures 4" x 4" and is 1/4" thick. Coasters come in sets of 4.

The Igloo Party Bar Cooler keeps the party lit up all night long courtesy of LiddUp technology. The Party Bar is built to Igloo cooler standards, and enjoys the brand's name recognition, but differentiates itself from other coolers for a crowd with LiddUp's through-ice LED lighting system. Adding nighttime visibility during drink selection and a moody-smooth glow through the cold, LiddUp takes this Igloo from mere ice chest to full-on Party Bar.

At first I thought they were called Party POOPer Confetti Cannons, but probably that's just because "party pooper" is what everyone is going to call me for not wanting these godforsaken trash bombs going off inside my condo. Kazoos and party horns and other noisemakers I'll deal with, but loose little bits of confetti I'll be picking out from every crevice of my home for the next year? You get the Party Popper Confetti Cannons and host a badass party. I'm fine with mine clocking in at just a'ight.

To play a standard round of Shocktato, grab one or more friends, press the Start button, and begin passing the Idaho-sized russet back and forth or 'round and 'round as it plays festive music. Festive...and telling. If you're the poor SOB stuck with the Shocktato when the music stops, BZZZZZ! Enjoy a few volts of electricity. Maybe it will wake you up. Teach you not to be on the losing end of the tuber next time.

Wishful thinking for you and yours heading into 2020, plus a happy reminder of how much your beloved friends are worth to you.

And on New Year's Day, a memento of how much money you threw away on the damn party that left you feeling like Dante's 9th Circle of Hell. Don't worry though, you get to go back to work tomorrow and start earning it all back.

Icicle dry ice drink stirrers turn swizzle sticks into staffs of billowing smoke to accent your Old Fashioneds and add visual drama to your glasses of Champagne (which will complement the physical drama you'll feel the morning after downing a dozen of them). Icicles have bottom chambers that hold small chunks of dry ice and let them puff out their trademark smokey vapors while you drink.

The Chambong is an elegant vessel used for the "rapid and enhanced" (and elegant!) consumption of sparkling wine. Just mind the bubbles, whose population density in champers is apparently, like, 4 times what it is in beer, as evidenced by an experience I had with my ex-girlfriend Karen in which we were at a fine dining restaurant and I attempted to down an entire glass of Moet before storming out in hurt and anger over her heartless words, but instead ended up choking and convulsing and gripping my throat croaking, "It burns! It burns!"

Enabled by Smart Bar Technology by Barsys, the Coaster turns device owners into instant mixologists who can make thousands of cocktails at the click of a button. Users of the Coaster simply input their ingredients into the Barsys app, select the cocktail they would like to make, and place the glass or pitcher onto the Coaster surface. The lights change color to indicate when to start and stop pouring each ingredient, ensuring drinks taste exactly as they would at a cocktail bar in Manhattan.

Mix tracks, play DJ, and throw down to win with the DropMix Music Gaming System. Up to 4 players draw hands of DropMix music cards, each containing songs by popular artists. Placing a card on the DropMix board activates its song, and adding more cards creates your custom mix. Play your cards right, and it'll be a winning mix.

DropMix cards span multiple music genres, including electronic, pop, and hip-hop, and your starter deck comes with 60 cards that can combine to make millions of remixes.

Games: Dangerous Experiments for After Dinner

Dangerous Experiments for After Dinner: 21 Daredevil Tricks to Impress Your Guests could be the party game of the season. From sabering a bottle of Champagne to hanging a pear on a string over 2 criss-crossed knives, and then cutting the string to quarter the pear (?!) this daredevil deck of stuff to do besides talk about religion and politics is sure to be a big hit at your next gathering.

It also might make a colossal mess, destroy the porcelain spaniel figurine your wife's grandma gave her, and put someone's eye, but hey. Most of the best parties do.

It's your party and you'll shut it down if you want to! I myself am partial to the Please Leave By 9 with no alternatives version, but this listing includes all the numbers on the clock face for you to insert after the "By." Pick 1, 2, 5, 7, whatever you're up for in the early hours of 2020, and let the sign maintain its integrity as a funny piece of party decor without labeling yourself a big ol' party pooper.

To be provided upon entry not exit, my consummate hosts and hostesses!

Please Don't Do Coke In The Bathroom Neon Party Sign

Please don't do coke in the bathroom? Geez, the things you gotta be polite but explicit about asking people these days. First it was just, "Please wash your hands," and "Please don't flush things that aren't toilet paper...

Ah, mushrooms and disco balls, together at last. Really, though, it makes sense. I just watched a documentary on mushrooms - Fantastic Fungi - discussing the growing evidence that mushrooms can cure all illnesses, replenish...

Bring the booze and the party together like never before with this Disco Ball Bar Cart from Glam Globes. The mirrored drinks trolley has the same basic design as the 16th Century Italian Old World Globe Bar, but instead...

Now this is a hot tub that looks like a time machine. The ASB Nautilus is the world's first all-glass hot tub. And to further highlight that feat of physics, ASB has lined their whirlpools' floors with RGB LEDs in customizable...

18 Products to Elevate Your Next Backyard BBQ

Set the tone for your super party with some super invitations. No envelope needed! When you open the bat covered flaps the invitation is inside. Constructed from high quality cardstock, the invitations are quite sturdy...

The DudeIWantThat.com Vaccingles Night party pack contains everything you need to plan the perfect mixer for singles who have been vaccinated. In other words, all your beyond-horny friends, plus randos off the street...

16 Products to Help You Host a Better Dinner Party

These 16 products to help you host a better dinner party won't do all the work for you - you'll probably need a caterer, or your mama, to fill in some pieces here and there. But if you're hoping to create a few Big Night-caliber...