White Elephant Gifts for $20 or Less 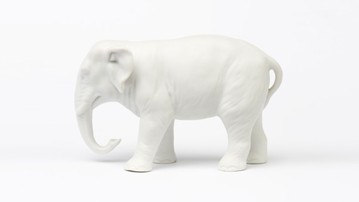 Some relish the thought of participating in a white elephant gift exchange, envisioning the gags and pranks they'll pull, the equal parts hilarity and awkwardness that will ensue when the boss ends up with the Flowering Penis Mug and Ajax with the Deadpool Chia Pet. This collection of white elephant gifts, all ringing in at $20 or less, is for those people.

Who doesn't long to be poppin' zits like a G6? Look no further than the Pop It Pal Pimple Popping Simulator. Even if the teen acne days are behind you, and most of those juicy back zits juuust out of reach, this fleshy, pus-filled brick brings the equal parts gross and gratifying act of bursting a dermatological volcano to everyone. Poise your pointer fingers, amp up your bodily fluid fascination, and get ready to Pop It Pal.

Think Deadpool can say Chia in as many languages as he can say Chimichanga? The Deadpool Chia Pet, in his own special brand of red suit, arrives just in time for the holidays, and all of your white elephant gift parties.

If you don't have any White Elephant gifts to buy, at the very least everyone you know should get some Wild Coal in their stocking this year. Ha! What a terrific twist on the old naughty kids tradition. The lump of coal theme turned into a product that's actually useful - in the case of Wild Coal, activated charcoal made from organic coconut shells.

Wild Coal calls itself an aid for cheat meals, alcohol, eating out, and the ingestion of something unhealthy. You can take it before bed to absorb the day's toxins built up in your gut, as well as before, during, or after rich meals and alcohol. Just be sure to drink plenty of water along with your Wild Coal, or all the charcoal-bound contaminants in your system will pile up like lumps of real coal and constipate the ever loving shit out - or rather, not out - of you.

The One Hour Photo might be a thing of the past, but the roll of film containing seductive George poses will live on forever!

When you don't know what someone wants, it's always a safe bet to give them some dough. Unless it's a white elephant party, in which case, go for bread instead. Specifically, a nice, squishy tag team of French baguettes.

The second part of this book's title is Cute Handicrafts to Make with Your Cat. Now let's think about that for a second. It's preposterous to imagine you and your cat could team up on craft night to make some dog voodoo dolls and tuna fish-scented glitter balls for him to chase around the living room. Right?

I love how, along with depicting the unsavory image of a fat person spilling out of his jeans in a way that still makes me want to take a big bite out of his moist and caky excess fat, these muffin top molds also stay true to how things are in real life in the ass department. As in, they haven't one.

These nifty miracle berries are eaten before meals to make the meals taste better. "How?" you ask. By making sour and bitter foods taste sweet. I have tried these and they do work. Don't believe me? Take one and eat the best tasting lemon you've ever had.

Awww, in addition to using Busted Knuckle Garage's Magnetic Finger Tool to quick pick up small metal objects around their house and garage, your white elephant recipient can use it to attract a screw or nail and make themself a Magnetic Finger Tool penguin for their kids' next puppet show.

According to every woman's favorite book, The Five Love Languages, physical touch is the predominant type of love males enjoy receiving, while quality time earns high marks with the ladies. Fundies, a chic pair of tandem tighty whiteys, make it simple for couples to give one another what they need. Just slip them on for both perpetual skin-to-skin contact, and instant elimination of alone time. Everyone's happy, and no one has to "talk about it" or "compromise." Fundies are recommended by 4 out of 5 therapists, and 5 out of 5 fans of the missionary position.

Stop putting off exercise until tomorrow and dreading going to the gym at lunch. Just get off your ass and walk around the block...twice...now. Trust me, it will be done before you know it.

Big Mouth Toys' Exercise Block is a silly white elephant or novelty gift for anyone you know who never has enough time to work out, puts it off, or is an all-around lazy MF. Even the biggest workout unenthusiast will be able to find a moment and some motivation to walk around this block a couple times. Bonus: The Exercise Block comes with both complete instructions for use, and affirming words of praise for those who successfully complete the task.

If your favorite pastime is being offended, get ready for hours of fun with Offensive Crayons. The standard box allows politically incorrect artists to color a a moving neutral abstract out of Miscarriage Maroon and Travel Ban Brown, with accents of Insufferable Vegan Green, and the unavoidable wash of Privilege White.

And new for the 2018 holiday season, Offensive Crayons take it a festive step further, and "put the ho back in holidays."

100 Tricks to Walk Naked Without Anyone Seeing You

I only need 1 trick to walk naked without anyone seeing me, and I've had it for a long time: I just close my eyes. If I can't see them, they can't see me.

For anyone nervous about wrapping up a book of this questionable nature, relax. What you'll really find between the covers of 100 Tricks to Walk Naked Without Anyone Seeing You is 200 blank white pages! It's just a notebook. A journal. A book (ironically) in the buff!

For all the ladies (and fellas!) who count floral patterns and penises amongst their favorite things, have I got a mug of a gift for you. Clothing and accessory brand HUMAN goes for a very anatomical part of being one here with their flowering penis coffee mug. Look closely, it's a cock-tical illusion!

A Gronking to Remember

A Gronking to Remember, or as the late mayor of Boston, Tom Menino would call it, A Gonking to Remember is the first! in the Rob Gronkowski erotica series. E L James move over. And for that matter, Twain, Hemmingway, and Fitzgerald as well. Lacey Noonan has firmly cemented her place on the Mount Rushmore of great American authors with this tour de force.

The buns are made of real human hair! They attach to men's own hair / head via a pair of combs. They also have a drawstring tightener for those who just want to beef up their existing man buns, as they would their butts with enhancing boxer briers, or their balony ponies with a Lightsaber Willy Warmer.

A Crotch Staring Cat with swappable crotch parts? Being a reluctant, yet attentive, cat owner, I can say this toy from Chinese cartoonist QianLi Ma is not based on real life. At least not in my experience. Now a Crotch...

How to Survive a Garden Gnome Attack

The 12-inch menaces are coming for you! You might think How to Survive a Garden Gnome Attack is a parody, a humorous manual for the coffee tables of lawn ornament enthusiasts. But consider how garden gnomes have evolved...

I saw this Butt Hole Stretcher Prank Mail piece from Design Doggie, and all I could think was, Wait. Is butt hole one word or two? I thought it was butthole, not butt hole. But then I was like, Ahhh, I get it. A deliberate...

Sweet! This DIY Vasectomy Kit should save me hundreds of dollars. Plus, the projected recovery time is a couple days longer - more if my wife screws up - so I'll be able to take off the whole first week of the NCAA tournament...

My picks for the 17 best Dirty Santa Gifts for 2020 sees Dirty Santa preparing to release the Kraken. Dirty Santa pleased to show off one set of nuts while cracking another. Dirty Santa showing a preference to butts over...

The Dick-Head Toothpaste Topper Cap says, "Dude, you have the nicest teeth I've ever come across."...

For all the ladies (and fellas!) who count floral patterns and penises amongst their favorite things, have I got a mug of a gift for you. Clothing and accessory brand HUMAN goes for a very anatomical part of being one...

When I see this - a true masterpiece in fine art - it reminds me of another masterpiece, the musical masterpiece "Get Low" by Lil John & The East Side Boyz. And specifically the song's refrain: To all skeet skeet, motherf**ker...