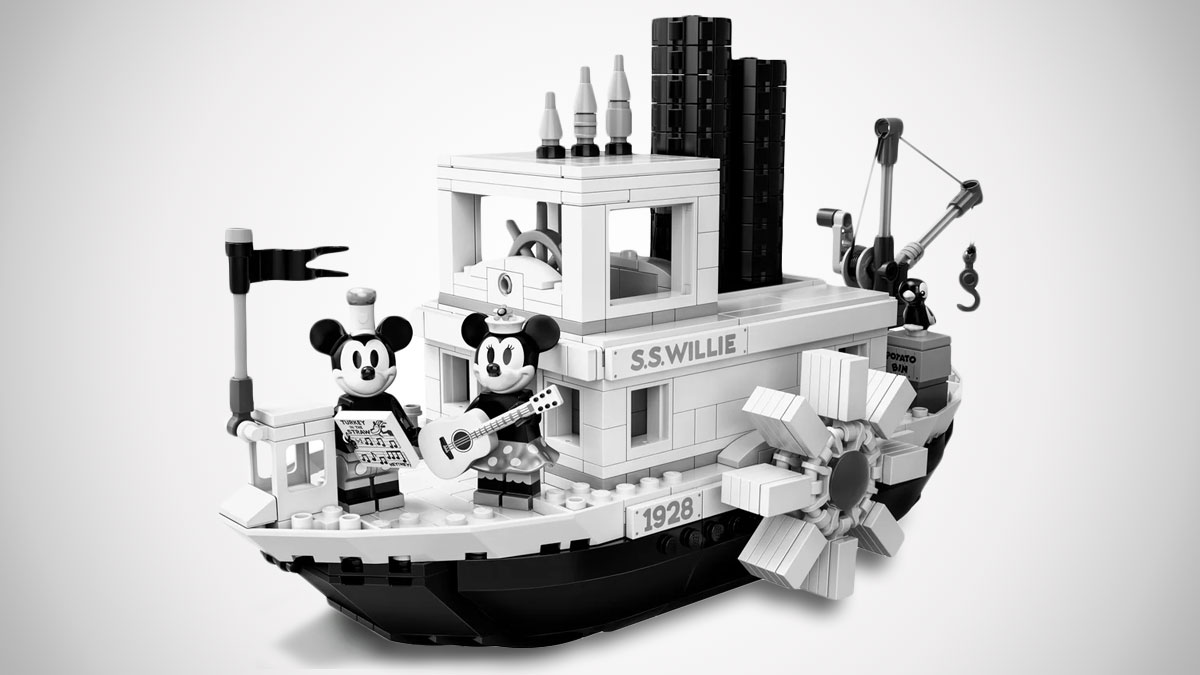 Curious date LEGO is releasing their Steamboat Willie build. They say it's to honor Mickey Mouse's 90th anniversary. The black-and-white build reflects the SS Willie featured in the Disney cartoon character's 1928 debut, an animated short film called "Steamboat Willie." And I guess April 1 is a Monday in 2019. Beginning of the month, beginning of the week - seems like a good day to release something new.

Alright, LEGO, I'm going to to trust you on this one.

But no one else! I'd advise the rest of you dudes to adopt the same mindset. Who knows what kind of trickery other companies, not to mention co-workers, wives, and friends Cornelius, are going to cook up over the weekend leading up to April Fool's Day this year.

Back to the LEGO 21317 Steamboat Willie, though. The design features moving steam pipes and rotating paddle wheels, and a working crane on deck that lifts a potato bin aboard. Also new for April 2019 are included Mickey Mouse and Minnie Mouse minifigs, plus a pet parrot.

A better inclusion would have been a sensor-activated Porky Pig head mounted to the top of the SS Willie that stutters, "That's all folks!" when you wave your hand across his face. There's still time, LEGO!

Oh Mickey you're so fine, you're so fine you...got any more pound cake for me to hold under your torso of cascading liquid chocolate?...

The Morbid Mouse don't want no stinkin' cheese. He wants your bottles of craft brew. Your Dos Equis. Even your Bud Light Lime once you're wasted enough to forget it's twist off...

Despite his perpetually sunny outlook, Mickey Mouse always seems to get screwed. His likeness on this light bulb might be the final blow following his and Minnie's divorce proceedings. Did you hear about that? Mickey...

Mickey Mouse in a gas mask. That definitely looks Disney-approved. And I hear Mousemask Murphy is to be voiced by James Earl Jones in the forthcoming 3D animated film intended to make children insist on sleeping in their...

I've never been into the whole mermaid thing... until now. The shells were hand carved, then molded, and each shell is hand cast in a plastic resin. The shells come painted in whatever colors you would like and will fit...

If any lady wearing this Ariel bikini wants to be part of our world, I think I speak for most dudes when I say, Come on in! The seashell swim top and sexily-scaled mermaid bottoms are instantly recognizable as nods to...

Ha! An Aladdin's Lamp E-Cigarette! Some real family-friendly merch to launch in tandem with Disney's live-action rerelease. I wonder if the fresh and princely genie inside approves. And whether he's more partial to the...

The CINEMOOD Portable Movie Theater boasts both about the big things it projects outside and the big things it contains inside. The 3" cube serves as an indoor / outdoor projector with a 5-hour battery life, as well as...

Now here's a way to increase workplace productivity. Ha! The MelGeek Pixel LEGO-compatible keyboard is actually the perfect accessory to a new term and practice I heard about the other day: quiet quitting. It's the process...