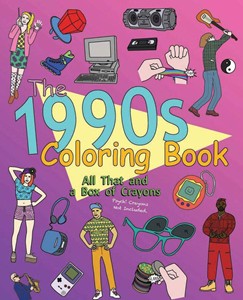 So a couple weeks ago I was my mama was watching the Saved By the Bell movie on Lifetime and I inadvertently saw a scene or two. I had no idea, no idea! that Zack Morris got it on with Lisa Turtle in real life. Only she was a Jehovah's Witness so she couldn't really get it on. Or, like, be seen with him in public and celebrate birthdays. Naturally he moved on to Kelly like a smart, horny teenage boy. Screech though, he was no surprise. I knew that kid was a downward spiral incarnate. Did you hear how he mocked Jessie's riveting "I'm so excited, I'm so excited, I'm so....scared!" line during the game-changing caffeine pill addiction episode from off set? Anyway. What was I supposed to be talking about again?

Ah yes. The 1990s Coloring Book: All That and a Box of Crayons (Psych! Crayons Not Included.) An interactive time capsule of the greatest decade ever--or at least the one that has sucked the least for me so far--these 64 pages invite you to bring Crayola-kissed life to the cast of Saved By the Bell. And to Steve Urkel. NSYNC vs. the Backstreet Boys in a game of TRL Tug of War. Topanga and Cory leaning in for a makeout. The Fresh Prince smelling his cabbie later.

The 1990s Coloring Book immortalizes 10 years of "off-the-hook movies, dope TV shows, all-that music, and rad fashions" in drawings, connect-the-dots games, and tidbits of trivia. One reviewer points out it even succeeds where other activity books fail in that the artwork is bare bones enough for your scented neon markers to actually color inside the lines. Hmmm. Sounds less like a calculated favor than typical 90s slackerdom in action to me.

Ugh, I am so sick of writing about boobs. Haha...sike! Particularly when the boobs come in so many exhilarating shapes and sizes and practically beg to be caressed. OK, so they're made of ink and paper, and technically...

That's a nice strap-on you've got there, ma'am, but I think it could use a little more color...

According to The Big Coloring Book of Sex Positions, "Sex curls our toes, sparks our imagination, delightfully stimulates a multitude of sensations, makes us have funny faces, makes us docile and makes us crazy." Apparently...

Color-in Wallpaper is kind of like I See You Wallpaper, but without the watchful eyes looming over your every move, passing judgment as you eat Hungry Man Dinners, and rolling into the backs of the heads you drew for...

The researchers at Living Ink Technologies weren't spending all of their investors' money trying to figure out how to revolutionize disappearing ink for the 21st century. They were hoping to develop a sustainable algae...

Geez, even connect the dots sex looks complicated. There must be 200 numbers in each of these puzzles, and good luck trying to figure out what's lurking behind the connective ink lines before putting in the elbow grease...

As you can see, Super Sculpey sculpturing compound can sculpt some pretty super sculptures. The mutant dentist's nightmare in the photo above comes courtesy of Chris Maxwell via ConceptArt. Additionally, a simple online...

Between the Lines: An Expert Level Coloring Book

Why does Between the Lines: An Expert Level Coloring Book exist as a Kindle Edition? I mean, I don't really use much technology aside from my flip phone and Apple IIGS, but I feel like the appeal of a coloring book, particularly...

Adult coloring books are getting to be nearly as popular as Xanax for promoting relaxation and managing stress. Pair filling in the intricate line drawings with a few puffs of your favorite herbal refreshment, and you...

The Serial Killers adult coloring book is moderate to complex in detail and staying-in-the-lines difficulty, and therefore not suitable for children...