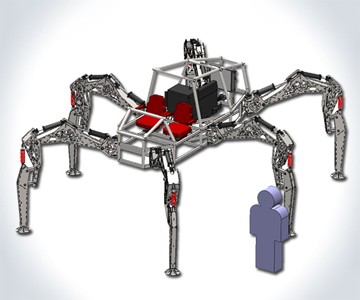 Say hello to my open-source, 18-foot-wide, 4,000-pound, 6-legged hydraulic little friend. His name's Stompy, and he is a gargantuan spideresque robot currently being built to tote humans, and crush the living bejeesus out of inanimate objects. OK, that last bit isn't exactly Stompy's purpose in life, but it is a sweet perk of his force-sensitive legs and yoke-of-oxen-like strength. Choosing an item for Stompy to pummel to smithereens is also one of the rewards available for backers of Project Hexapod, the robot's creators and purveyors of his magical gifts on Kickstarter.

A team of three professional roboticist instructors, one Battlebots-building TA, and 15 students from the Artisan's Asylum in Somerville, MA comprise Project Hexapod, which has spent over four months designing Stompy, and now hopes to construct and tour him around the country, with the ultimate goal of putting the giant arthropod to practical use. Stompy's legs of steel and 6-foot ground clearance will prime him for traversing broken terrain and surfaces--including mountainous spreads, rubble piles, and even waters and flooded areas up to 8 feet in depth--that existing ground vehicles cannot. In addition, his strength and structure will be equipped to carry around 1,000 pounds moving at 2 to 3 mph, and up to 4,000 pounds at 1 mph. Imagine, as Project Hexapod has, what the robot could accomplish in devastated areas, or places such as Haiti and Japan that have experienced catastrophic natural disasters. Right now, helicopters are the most efficient means of leading rescues and delivering supplies, and clearing rubble in affected areas is a painfully long and laborious process due to land vehicles' lack of accessibility. In some areas of Port Au Prince, for example, rubble removal has taken more than 3 years.

Stompy has already surpassed its Kickstarter funding goal of $65,000, and the project runs through September 2, 2012. Once the prototype is complete, Project Hexapod will release their plans, CAD, diagrams, presentations from lectures, all materials used in breathing life into a beast they believe has the potential to change the world. In addition, the construction and control techniques the group is using are intended to drastically reduce the costs of controlled hydraulics--enough to make giant robots affordable to smaller scale enthusiasts.

Kickstarter pledge levels ranging up to $200 carry rewards such as T-shirts and signed photographs of Team Hexapod thumbs upping in front of Stompy. At $200, backers receive either 10 characters of their choosing welded onto Stompy's chassis, or the luxury of providing the team with an inanimate object of their choice, which Stompy will crush mercilessly. The process will be filmed and posted on YouTube. Vengeful and scorned men and women, I hope you're listening. This is your chance to annihilate your bad memories in perhaps the most gratifying way ever in the history of humankind.

For $300, ye of deepish pockets, Stompy will take you for a ride on one of his demo days, and for $1,000, you'll get to drive him. It only gets better for higher pledge levels, so be sure to check out the project on Kickstarter, don your shit stompers, and get ready to meet the next page in the grand tome of robotics.

November 2013 Update: Stompy successfully reached its crowdfunding goal. Those still interested in following and donating to the robot's progress can find more information by following the link to the Project Hexapod website below.

Now I don't know how many people out there who are into candles and wax melts and aromatherapy are also into robots, but if that's your demographic, my dudes and ladies, have I got a Robot Lamp Candle & Wax Melts Warmer...

Me: One 13-foot-tall, 9,920-pound menacing robot that I can either ride and pilot with mere hand and body gestures from a cockpit, or control remotely with my 3G connection, please...

Designing the Yardroid to look like a mini tank is pretty much all they needed to do to make me want this smart landscaping robot. But Yardroid takes the whole robotic lawn mower concept, like, 8 steps further with both...

It may not muster the technological sophistication of the Kuratas rideable battle mech, but I'd still rather have Dustin Kiska's Aliens Caterpillar P-5000 Power Loader replica because Kiska built all 200 pounds of it...

Sorry to all the Veruca Salts out there, but you can't have a Ripsaw M5 Robotic Combat Vehicle or an Oompa Loompa. Willy Wonka and the US Military say no...

A couple of years ago, Sphero became the first robotic ball gaming system maneuverable through a tilt, touch, or swing from connected smartphones or tablets. Sphero can roll on tabletops, serve as a handheld controller...