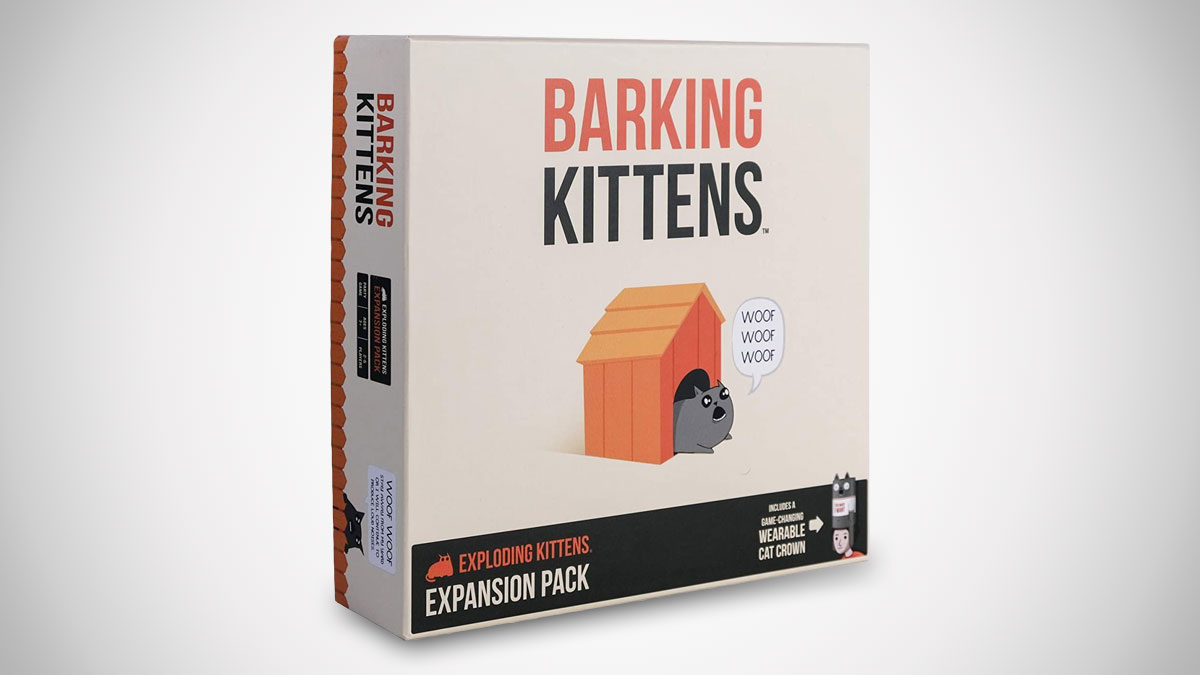 Don't let my filthy mind give you the wrong idea, though. Barking Kittens is a family-friendly expansion pack made to refresh the original Exploding Kittens game, not specifically tailored to its NSFW Edition. With more cards illustrated by Matthew Inman of The Oatmeal, here are some of the meowsome additions Barking Kittens brings to the game:

The people who rattled our game nights with Exploding Kittens think we're up for a new challenge: an army of evil and grotesque babies. Bears vs. Babies is another ridiculous card game filled with implausible (but not...

Since the holidays are over, seems like we should be focusing less on the 7 Deadly Sins in our playing cards box sets, and more on poker nights and COVID-quarantined hours of solitaire with suits sporting the 7 Heavenly...

Sriracha: The Game gets spicy by getting slappy. Think Slapjack with popular foods people like to smother with the Huy Fong Foods hot sauce. Burgers, eggs, tacos, pizza, Ramen I think I even see some sushi in there...

Card games, whatever. But burritos and dodgeball together? Like, at the same time, not the one as a consolation prize for getting pummeled in the face with the other? Throw Throw Burrito, I'm listening. You have, like...

The Game of Nasty Things

The Game of Nasty Things outrages and offends in the spirit of Cards Against Humanity but, in my opinion, is a more creative - albeit more challenging - party game to play. Think of it as the difference between the Reverse...

Dude Card Game - It's a Game Where You Say Dude

Dude, let me start off by saying I am in no way affiliated with Dude the card game. Nor have I ever played the Game Where You Say Dude. But, dude, come on. It's like Dude coming home to Dude...

Do you look like your cat? I don't think I look like mine. For example, my cat, Zanzibar, has a bushy tortoiseshell coat of fur that covers his entire body, while I myself am almost entirely hairless (thanks, Remington...

These black foil playing cards are cool...uh...if you can read them. All I see is black-on-black making for some foibled flushes and full houses on poker night - Dude! That's 2 kings, 2 aces, and a 7! - and some chronologically-challenged...

If you've spent the last 6 months hoarding toilet paper, hand sanitizer, and face masks to win at the game of life, you probably think you're already the Quarantine King. But. Would you be willing to put your bathroom...

The UNO Retro Edition doesn't just bring back memories of my childhood weekends at my nana and grandpa's (Nana always tried to let me win, Grandpa was competitive) but also memories of a conversation I had with a Canadian...

The DudeIWantThat.com Vaccingles Night party pack contains everything you need to plan the perfect mixer for singles who have been vaccinated. In other words, all your beyond-horny friends, plus randos off the street...