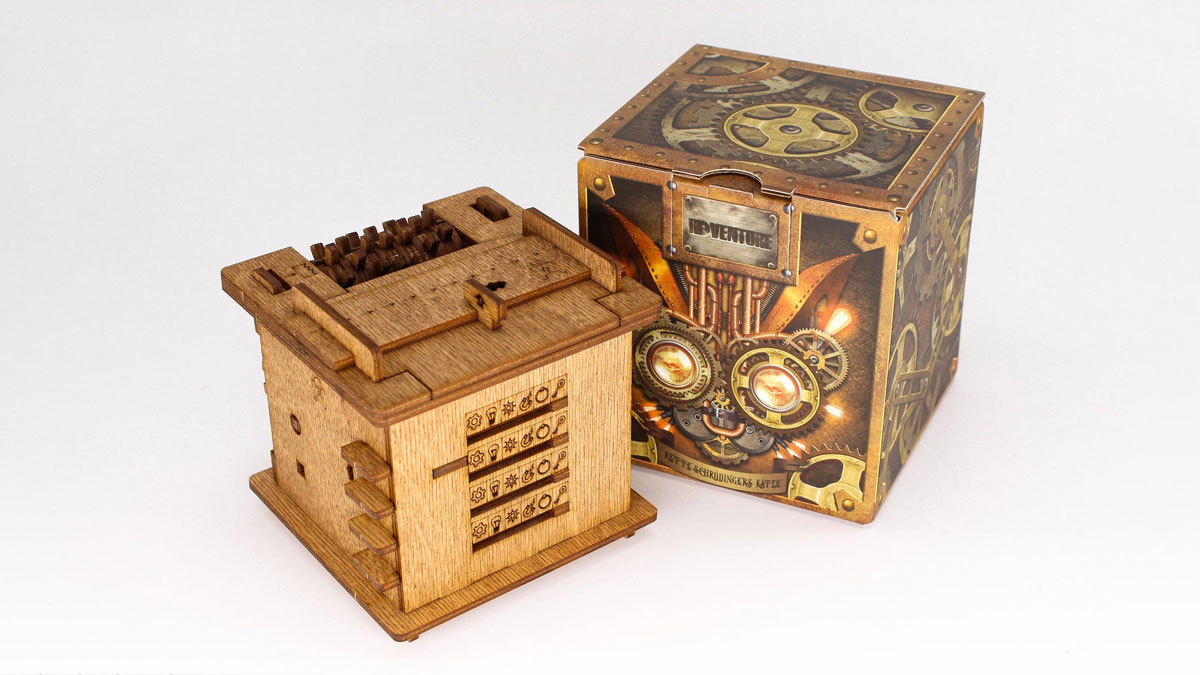 $35
from iDventure Games »
Check It Out

Escaping a box sounds like about the worst task ever to me. I can't even watch David Blaine do that shit without needing a Xanax. Luckily, Cluebox doesn't require one to crawl inside its 4.7" cubed birchwood walls to make their escape. This escape room in a box is a handheld brain teaser, a puzzle completed from the outside rather than the confines of an uncomfortably small space within.

Handmade by the crafty cats at iDventure Games, Cluebox consists of various puzzles whose successful, and successive, completion leads to the unlocking of the box. In other words, solve one puzzle, and you'll gain access to the next, with the last puzzle revealing the center of the box, a small empty space suitable for hiding small valuables, or turning the Cluebox into a devious gift a la the Puzzle Pod your recipient will have to work to collect.

Cluebox typically takes between 45 and 60 minutes to solve, and in addition to the thoughtful and unique craftsmanship that goes into building it, iDventure Games has come up with a thoughtful and unique escape room story to make the game more interesting. It's based on a thought experiment conducted by Austrian physicist Erwin Schrodinger scientists now call Schrodinger's Cat. To illustrate the problems of quantum mechanics in everyday objects, Schrodinger imagined a cat and some poison locked together in a closed box. According to the rules laid out by quantum mechanics, after some period of time, the cat will be both dead and alive.

In the Cluebox story, Schrodinger has placed the cat and the poison in the box, and then plum forgotten about them. Your mission: save the cat. Or better, get to it at the exact moment it is both dead and alive.

For $220...and the cost of a trip to Singapore...you could enter The Fragment Room, and unleash 60 uninterrupted minutes of all-out rage. Smash the plates and vases. Bash in the monitor. Take a bat to the walls. Scream...

Since we've all pretty much been trapped in escape rooms we can't get out of for the past 2 months, LA-based escape room company 60out has put together the Miss Jezebel Virtual Escape Room experience to provide a figurative...

A Bathroom Book for People Not Pooping or Peeing

I wonder if Joe Pera and Joe Bennett created A Bathroom Book for People Not Pooping or Peeing but Using the Bathroom as an Escape in a moment of actual hangin' in the bathroom to avoid social interactions, work drama...

Panamanian inventor Morris Shahbazi once bragged to disbelieving ears that his SOS Parachute, an emergency evacuation system for people in high-rise office buildings, hotels, and residences, could open in 100 feet, or...

For ye who seek to build a backyard retreat who have already scrimped and saved, here are some ideas to help you splurge on your endeavor. Hot tubs, hammocks, detached office pods, and huge cauldrons o' fire...

Shomer-Tec's Titanium Escape Ring won't just serve as a symbol of your love for and commitment to your wife, it will also get you out of the handcuffs that chick from the hotel bar leaves you in after she Roofies you...

This 2 minute video clip is the equal of any movie I've seen this year. Suspense, intrigue, a classic soundtrack. I won't ruin the ending for you... but the good guy wins. This is the gutsiest damn frog I've ever known...

Sorry, dudes, as much as you and I might want to kick back in the living room amongst a garden of calming plants, or in the middle of a stone-filled pool bubbling under our asses, the Dhyan zen lounger is just a piece...

Hyun Yeol Shin's Emergency Escape Filter is a pill that can save your life without ever swallowing it. It functions as a fire escape mask, but without the full-face mask apparatus that can be difficult and time consuming...

If I had a nickel for every nickel that's ever gotten me out of a pickle, I'd have...one Shomer-Tec Nickel. Because, holy Thomas Jefferson, dudes, the Shomer-Tec nickel isn't just your average five cent piece. It's also...