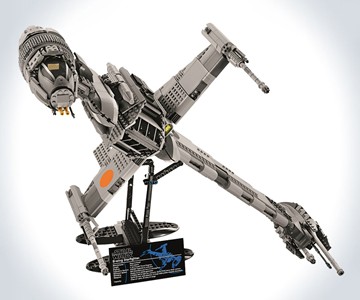 The LEGO Star Wars B-wing Starfighter. 1,486 pieces. Model number 10227. 26" wide x 15" tall. Retail price a surprisingly reasonable $200, given the detail and artistry of the Galactic behemoth at hand. We said it too: Holy Vader, father of Luke! But then we had to regroup. Sit back in our Stormtrooper chairs, take a swig from our R2D2 water bottles...my friend Wolfgang even needed to put a few Han Solo in Carbonite ice cubes down his pants. LEGO won't publicly release the B-wing Starfighter until October 2012, at which point it will be available to all with access to twin Benjamin Franklins on shop.lego.com.

Notable B-wing elements include its cockpit pod, which proved the biggest challenge to design because it's round, and LEGO's official position on circles is F 'em. So there aren't many round parts to be found. A couple of upcycled motorcycle wheels, caterpillar tracks, and human ingenuity* joined forces to make a rotating navigation central happen and, in turn, set the scale for the model.

Intended predominantly for display and companionship during 3 a.m. viewing sessions of Return of the Jedi, this starfighter doesn't boast a ton of moving parts--just the turning cockpit and foldable wings--but what it lacks in ambulation it more than makes up for in picturesque stoicism and formidable presence.

*We would love to tell you the name of the follicularly-challenged genius who designed the Star Wars B-wing Starfighter for LEGO, but he seems to be Dutch or Danish, or maybe Australian, and when he introduces himself his accent completely wipes any chance we may have had of deciphering it.

I would be remiss if, in seeing the Building Brick Waffle Maker from CucinaPro, I didn't say: it's time to LEGO my Eggo!...