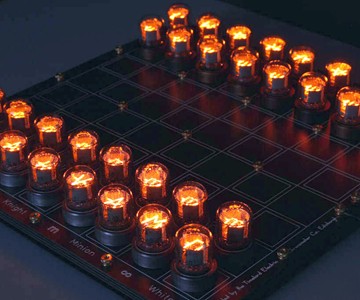 Now here's a new spin on smart lighting. Lasermad says their stellar Nixie Chessboard is the first and only Nixie tube-powered chessboard in the whole world, and I believe it. Who has the creativity to even come up with that as an idea, much less figure out how to build it and make it work? With no plugs. Whether you checkmate or not, you'll always light it up in this game of chess.

The Nixie Chessboard's IN-7 tubes are all powered by induction coils routed beneath the board. This particular version, Lasermad's V1.5, works right out of the box, with no assembly required.

Though identical in general appearance and size, chess pieces are illuminated with symbols that denote their rank.

I'm covering the Juicepair, a set of salad servers that lock together to double as a lemon juicer, because I think it's a clever design. But in terms of its literal usage, as a means of squeezing a lemon directly over...

Two notches on a baseball hat equals one notch on Notch's belt for ending the war between sunglasses and billed caps. Notch sunglasses-friendly hats have patented cutouts on either side of their bills that enable them...

Ambient Glow Technology's Glow Stones combine with concrete--they either mix in freestyle or nestle in methodically--to create everything from illuminated pathways to Fairyland to sculpted lawn ornaments to mood-setting...

The SWING convertible table-to-shelf is magic! Not quite Fletcher Capstan magic, but still a pretty sweet design from EVE Collection, especially for those with limited space for furniture...