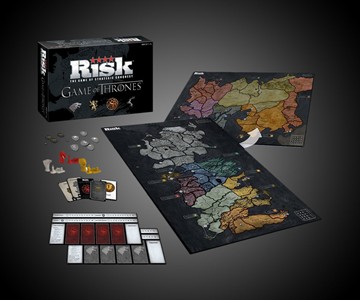 Just when I thought the suspense couldn't get any worse...or the wait any longer...than it is just watching the kings, avengers, enterprisers, and power hungry on Game of Thrones the series fight to control Westeros. Now Risk has released its own GoT edition in a move to add at least another 3 hours of battle, bloodshed, and gratuitous nudity to any night I unfold its board. Which is still a more immediate payoff than the series: start by 8 p.m. and know who's landed the Iron Throne by midnight.

Risk: Game of Thrones follows the same basic rules as the original, with a new pair of boards and 3 different ways to play. On one board is Westeros and a version for 3 to 5 players to assume factions of noble Houses and vie for the Iron Throne during the time of The War of the Five Kings. On the other board lies Essos and an opportunity for 2 players to play along with Daenerys Targaryen's rise to power, contesting the rule of Ghiscari slavers. Combine both maps for a 7-player war incorporating all 7 Houses.

Version Game of Thrones has more than 650 pieces (one for each character Martin has introduced?) Each of the 7 Houses has armies of 45 pieces each to cover the first 315. Then there are character cards, silver-foil stamps of House sigils, gold dragon coins, maester cards, and quest cards to round out the second half of things that are probably going to get lost or stolen by your friend Cornelius after the first game.

Trekking the National Parks Board Game

So many national parks, so little time to hike and camp and do #2s (and then bury them like a responsible nature lover) in them all. Well fret not, my dudes and ladies, because even if you can't hop in the Sprinter Van...

The Game of Thrones Collection

The start of Season 4 may still be a few weeks away, but Black Milk's Game of Thrones clothing collection drops in mere hours. Houses Stark, Lannister, Targaryen, and Baratheon represent in an array of nakedness shields...

Though it ultimately couldn't keep Ned Stark's head affixed to his body, the Valyrian steel sword Ice did serve his majesty of Winterfell well. And, should you be one of the lucky keepers of the North to grasp the formidable...

White Walkers are creepy, dude. Creepy enough that I think I'd rather look like one than at one. But I'd most rather look like Khal Drogo because then all men would still be scared of me, and all ladies would quiver in...

DCIllusion hand forge and finesse their blades from damascus steel, their handles from the likes of bone, horns, and brass, and their designs from the combined imaginations of the world's best LARPers. Each of the two...

Level Up Board Game Platform

Level Up. The perfect name for a modular platform with 6" legs set on your tabletop to, in every sense of the word, elevate your board, card, and role-playing games...