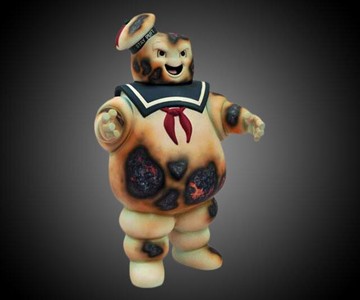 2014 marks the 30th anniversary of the original Ghostbusters' big screen release. Yeah, I know. I can't believe you're that old either. So obviously enterprising capitalists are making to capitalize on the Who ya gonna call? enterprise by releasing a host of new movie-inspired props, toys, and tchotchkes.

So far, this burnt-up Stay Puft Marshmallow Man bank is my favorite. Mostly because it's so terrifying that I can't look at its beady eyes and charred belly for more than 5 seconds without having heart palpitations. Kind of exhilarating. Also, my therapist says that feeling fear is better than feeling nothing. And, dude, when I was a kid, the Stay Puft Marshmallow Man was right up there with Freddy Krueger and the wrathful God from the Old Testament in his ability to fill my soul with fear. Probably because my mama always threatened to shove my face into one of his flaming ulcers when I talked back to her, but even for kids who never foresaw the impending doom of a nose incinerated by marshmallow, I think he's pretty creepy.

In fact, I'm not sure how you'd convince a kid...or a grown ass man...to put money into a burnt Stay Puft Marshmallow Man bank, but I'll bet once S'mores Demon's got it, there's sure as Shinola no way anyone will try to sneak it back out.

The roasted and raging Stay Puft Marshmallow Man bank is made of vinyl and stands 11" high. The coin slot is in his back, and his head removes to reveal his contents' access door. Oh good. At least decapitation is an option.

Ring - The Shortcut to Everything

Like FIN, Ring is a wearable input device controlled by gestures and finger movement. Unlike FIN, Ring picked a name inextricably bound to JRR Tolkien and an iconic, highly complimentary line about ruling them all, so...

Here's a Swiss bank safe for you to put in your living room. Or your back yard. Your secret catacombs? Somewhere roomy, guarded, and secure, because one thing's for sure: the vault's self-contained 1,619 safe deposit...

Trap yourself some ghosts, or at least some passing interest in your desktop display, with this Ghostbusters Mini Ghost Trap. The 4" replica of the one used in the original 1984 Ghostbusters film also boasts lights and...

I ain't 'fraid of no ghost. Especially when they smell like sandalwood and jasmine wafting out of this Ghostbusters Ghost Trap Incense Burner. Designed and engineered by Numskull, this nifty piece of Ghostbusters merch...

I must have stumbled upon the end of a rainbow because Jack. Pot. My days of spending 15 minutes crouched over my cereal bowl picking out all the boring healthy* brown bits from Lucky Charms are about to be as over as...

My wife, She-Ra: Princess of Power, is not a fan of Reebok's Ghostbusters Ghost Smashers Shoes. They contain a word in their titular description that P's her right O: "Men's." On the store page for the Ghostbusters collab...

Mr. Stay Puft's got nothing on my Mallow Bow. Sure, he can stomp on people, toss cars, and tear down buildings, but I can dole out cavities, high blood sugar, and toothaches. Straight to the kisser from 60' away!...

The Plastc Card is like the Coin card consolidator, except...except not much. The two financial data storage and universal payment options are very similar. Right down to their pre-order only availability (Plastc is expected...

The little bit of good news I have for you today is that we are only 16 days away from spring and 27 days away from Easter*, which means Peep eating season is upon us! Even better tidings for Minecraft die-hards: Marshmallow...

At first I thought Chef'n's Tabletop S'mores Maker was a marshmallow that had already been roasted, a square of chocolate that had been melted before. I myself have written about at least 2 indoor-safe, tabletop s'mores...