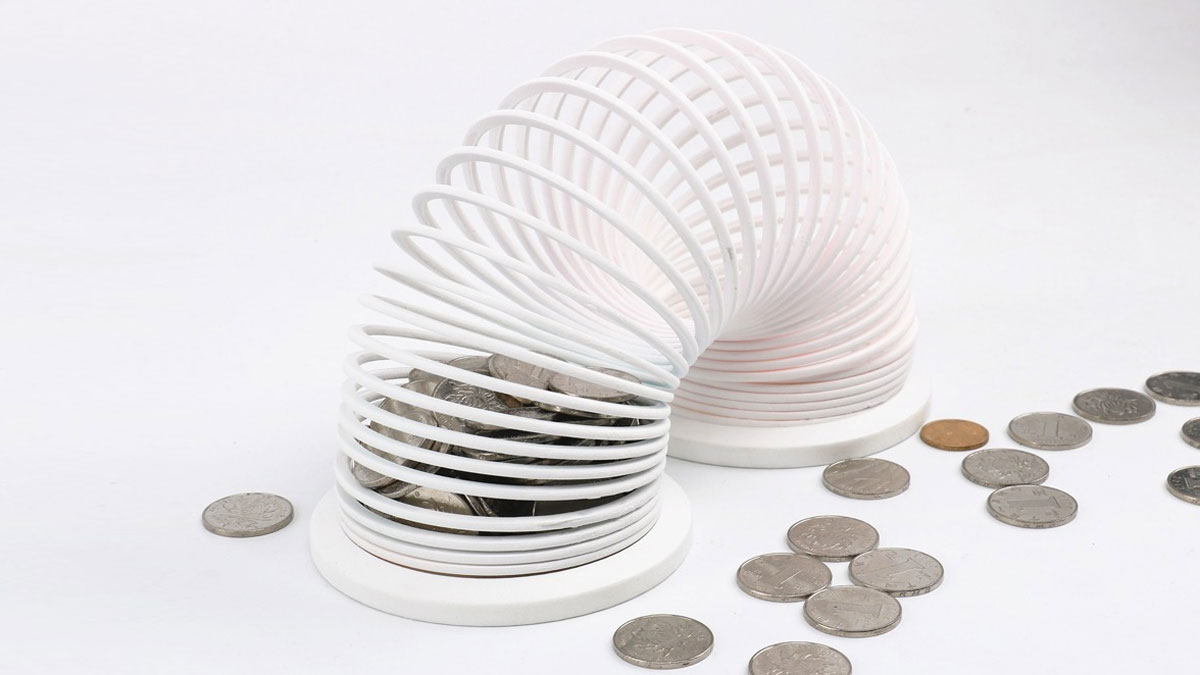 Ah, Slinkies and coins, my favorite things from the 80s mashing up to make the Elongation Piggy Bank*. The Slinky stasher doesn't make many changes to the original walking spring, but it does make 2 crucial ones: caps on either end.

One of the caps is completely sealed to catch your coins as they drop in, Slinky scrunched and standing on that end. The up end cap has a coin slot for deposits. And unlike some piggy banks with evil locks or destruction prerequisites for accessing your hard saved cash, the Elongation Piggy Bank makes getting the goods out even easier than putting them in. Just pick up the spring, and let the Slinky slink.

Hey, I said it was easier, I didn't say it was tidier.

*Yeah, I know the Slinky comes from the 1940s, but I played with them, and collected my nickels and dimes to buy ice cream and gumball machine toys, in the 1980s.

May I recommend the Slinky Planter for your Ponytail Palm? Romanian designer Andreea Cornila combines whimsy with nostalgia in her forthcoming Slinky Collection, a line featuring planters modeled after the iconic childhood...

If you've been toying with the idea of making an escalator for your Slinky, then you are almost as quirky and random as Matthias Wandel. Almost because Wandel went ahead and did it. The Slinky Machine is based on the...

Naomi is like one of those girls who is incredibly hot and arousing, but also kind of stony and completely unapproachable. Dare speak to her, or even look at her for one beat too long, and she'll crush your nuts like...

You can reach me at P.O. Box Don't Touch My Shit. And just in case you forget, I've locked the most valuable of it (cash, stash, Hot Wheels collectibles) up inside one of these very fine vintage post office door safes...

Coins. What a pain in my ass. Piles of them overflow various dishes and trays around my condo, smirking at me from behind their hugely disproportionate ratio of weight and manageability to value. Even the quarter suck...

Ain't no getting out of a New Year's resolution to save money when you have a fully sealed stainless steel piggy bank from LUSEN keeping you in check. There's no "back door" on this 6-sided vault of financial responsibility...

Now here's a new twist to the swear jar - a digital money-counting piggy bank that will let you know exactly how much all the sh*ts and f*cks you've given have cost you. Sounds like the perfect gift for teens - or gift...

Even if I weren't a gambling man I would like the 50/50 Savings Bank because every day it would remind me of Plinko, my favorite Price Is Right game, and also Bob Barker, my favorite game show host and general hero of...

Save your coins, store your cash, maybe even hide away your stash inside this miniature cash box / piggy bank combo. Available in red and black, the shrunken register measures 4.9" x 3.7" x 2.3", and has a coin slot on...

What a nice metaphor for the state of my finances. So, what, the Titanic Piggy Bank is going the Grandma route, and employing guilt to exact fiscal responsibility and discipline? Well, after 20+ years of reckless spending...

Ring - The Shortcut to Everything

Like FIN, Ring is a wearable input device controlled by gestures and finger movement. Unlike FIN, Ring picked a name inextricably bound to JRR Tolkien and an iconic, highly complimentary line about ruling them all, so...