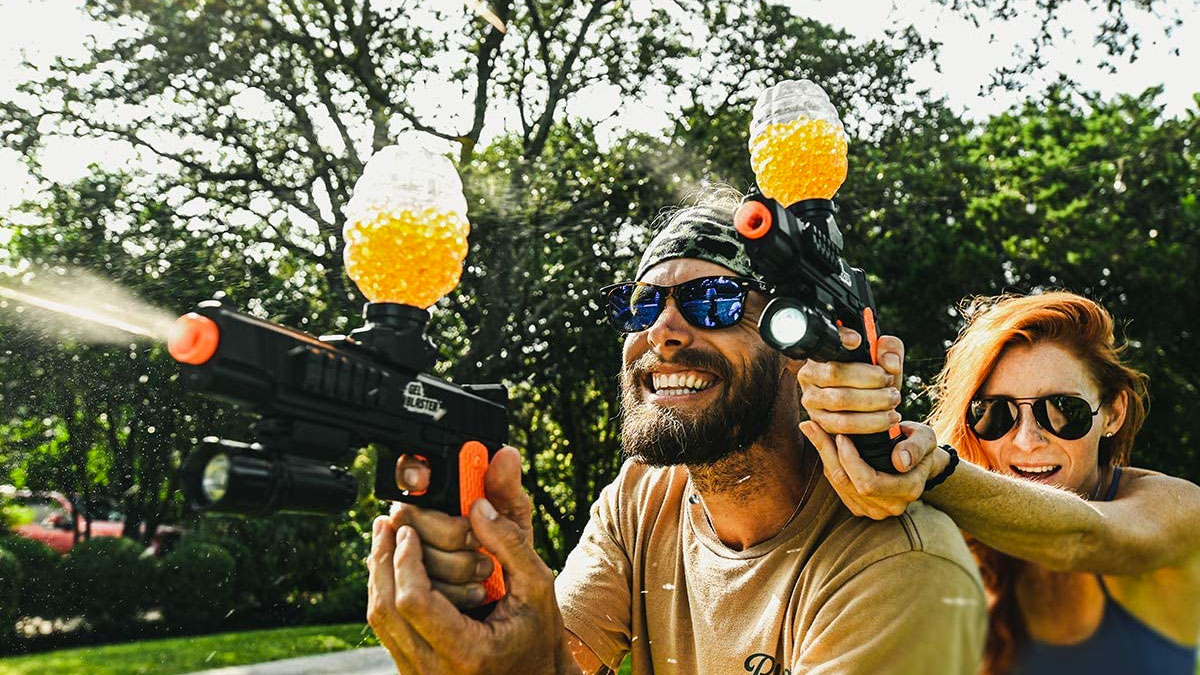 Its makers say the Gel Blaster, a toy blaster that shoots eco-friendly, water-filled gel balls, is fun for ages 12 and up. With an emphasis, if the above photo is any indication, on the and up.

The Gel Blaster's pellets, called "Gellets," aren't just safe for shooters, targets, and the environment. And they don't just fire from the blaster up to 100 feet at a rate of 150 feet per second. And they aren't just available in electric blue and Gatorade orange so you can designate and clearly delineate battle squads. Gellets' shining - or rather, splattering - feature is that they burst upon impact. They say it doesn't hurt, or stain, or make a mess. But it does make a nice thwap! and a squirt! wherever it hits.

Gel Blasters are battery-operated, and rechargeable. Each pack comes with 2 gravity fed hoppers that hold 700 Gellets apiece, a red dot sight, a mini flashlight for night play, accessory rails, safety goggles, and a pack of 3,000 Gellets.

The Tic Tac Gun takes aim at anyone who's eaten the garlic & cheese bread, or drank a whole pot of coffee this morning, and pelts 'em with fresh breath...

Here's a 445NM Infinity Blue Laser Blaster by Tony Starks. I don't know if that's his real name or not, but if so now we know that having just one letter more than Iron Man makes you Laser Man. The trapezoidal-rhomboidal-pieced...

Is it your destiny to score a Nerf LMTD Gjallarhorn Blaster from Bungie Rewards? You can improve your chances of following the path of a Guardian by acquiring the Gjallarhorn rocket launcher in the Destiny 2: Bungie 30th...

We all gotta change with the times, and Nerf is no exception. Sure, the introduction of the brand's first ever gel pellet blaster, the Nerf Pro Gelfire Mythic, doesn't mean they're giving up on foam darts and Hyper rounds...

Fully motorized with a 50-dart drum. Talk about things that make you go hmmm BOOM! Nerf's forthcoming Elite Titan CS-50 toy blaster is ready to unleash a hailstorm of foam in battle...

The forthcoming Dart Zone Pro MK-1 Collector's Edition Blaster doesn't look as cool as Nerf's new Elite Titan CS-50 Blaster, but when it comes to performance, it looks like all the boxes get their check. Range: 150'...