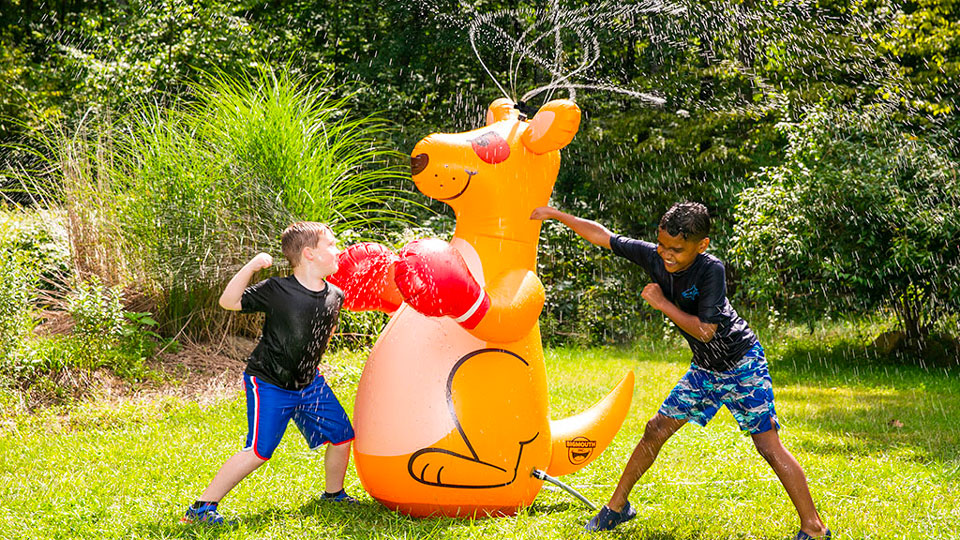 Your kid in a boxing fight versus a giant kangaroo. Now that sounds like a losing battle. BigMouth Toys has even given their kangaroo - Kangaroo Jack - a pair of boxing gloves and the ability to shoot a 360-degree spinning sprinkler in his opponents' faces, further ensuring the match will be unfair.

And, sure, Kangaroo Jack won't so much be throwing punches from his 5' frame as he will ducking and bobbing around his weighted, bounce-back base. Maybe little Carter or Parker or Cooper will get a few good Tyson-level right hooks in there himself. And when it comes to Kangaroo Jack vs. Karen Jr., I know my money won't be on the inflatable sprinkler.

The Giant Boxing Kangaroo Sprinkler connects to any standard garden hose and has a water soaker in his head, and sprayers in each boxing glove.

Want to be a true baller? Then grab that Triple IPA and crack it open with the scrotum of a Red Kangaroo. Or an Eastern Grey. Roo Balls turns (humanely and legally acquired*) castrated kangaroo bits into beer and wine...

Although Mewgaroo maker UniHabitat's website is plagued with the most jacked up English translation of Japanese I've ever seen from Google, I don't think this lack of a single coherent sentence describing the Mewgaroo...

Like any good kangaroo butler, this Kangaroo Side Table will hold your phone, your beer, and your bowl of popcorn on his tray. He'll hold your New York Times and your nudie magazines in his marsupial pouch. He'll look...

Oooo, da ball's flyin' back at my face. Better punch it again or it's gonna fall! The OODA Ball combines the weight of a medicine ball, with the tactile sensation of a boxing bag, with the bounceback-right-at-your-kisser...

Quiet Punch, a square of spring-mounted heavy bag that installs in a doorway, was designed for fighters looking to train outside the gym. But now that the punch buddy is available for pre-order, I think it might set up...

It seems to me the AquaBLAST Underwater Punching Bag is what boxing would be like in one of my nightmares where I can only move and do stuff in slow motion. In other words: Not. Cool...

The Sock Him Stan doorway punching bag gives aspiring boxers, MMA competitors, and people who just like to hit stuff 3 things neither the Boxaball nor the Aqua Training Bag can: 1) the

When I bite into a juicy cheeseburger, the last thing I expect - or want - is for streams of water to spurt out. I mean, normally. But a water-spraying Cheeseburger Sprinkler, now, that's a different story...

It's a scorching summer day. You're lounging on the patio. Jamming to some tunes. Sipping a cold brew. Gazing at the lawn. But something's missing. What's missing?...

You don't need to buy a set of Slip, Sip & Flip to play a version of flip cup meets the waterslide. Not as long as you have an old Slip 'N' Slide - or, better, Super Slide - stuffed in the garage, and a folding table...

Blake Johnson developed the Naiad Lawn Watering Robot concept in 2009, when he was an industrial design student asked to "Identify a problem in yard care and design a product to solve the problem." In his research Johnson...