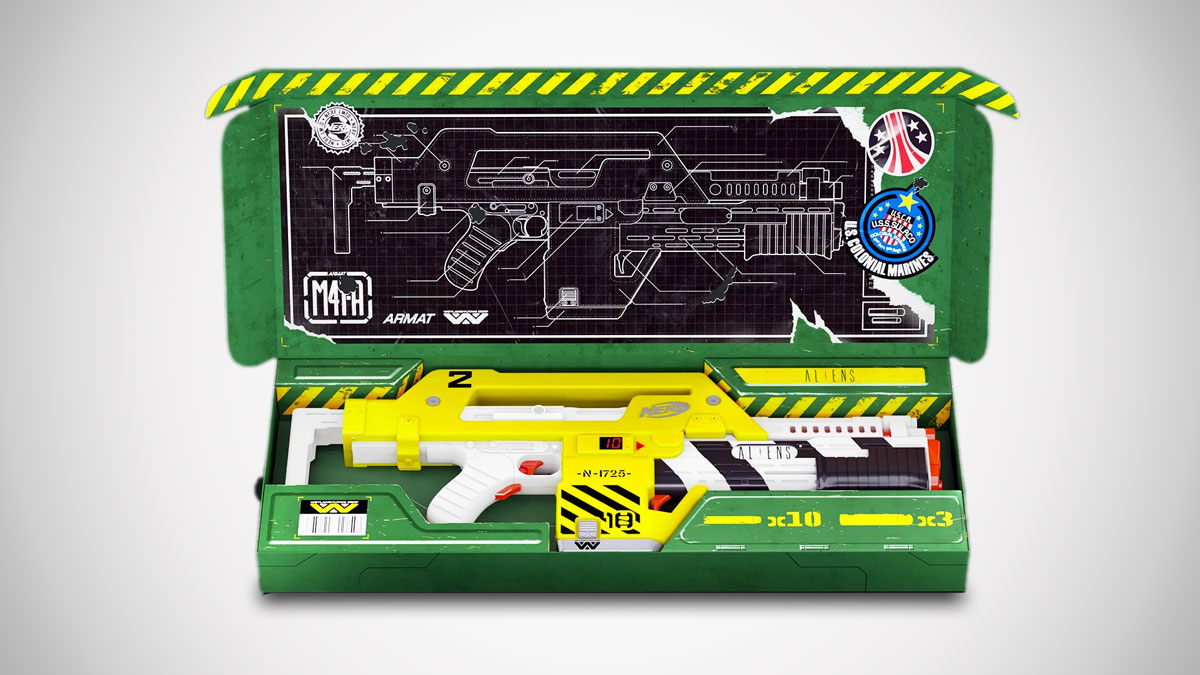 Guess what's coming out next, next fall. A NERF LMTD ALIENS M41-A Blaster that might look like the one above! In packaging that may resemble that which you see before you. Hasbro Pulse is offering up a presale of the new foam dart homage to the Alien movie franchise, in honor of the 35th anniversary of Aliens' release. However, the images they're using to lure you into the purchase are still just renderings, with the final product's look TBD.

That said, it's not like Hasbro is some Kickstarter entrepreneur with a big idea who will have to learn how to deal with production facilities in China, the ins and outs of import / export laws, and delivering product once they reach their funding goal. Probably whatever the NERF LMTD ALIENS M41-A Blaster turns out to be will be pretty close to what you see here, and Colonial Marine Corps-approved.

In addition to replicating the look of the M41-A Pulse Blaster - though not as well as this M41-A Pulse Rifle - the Nerf gun will have a Power Loader-inspired design and dual-blasting capabilities. Additional Nerfy features include an electronic dart counter, Aliens sound effects, and both fully-motorized flywheel Elite and pump-action Mega dart blasting modes.

It may not muster the technological sophistication of the Kuratas rideable battle mech, but I'd still rather have Dustin Kiska's Aliens Caterpillar P-5000 Power Loader replica because Kiska built all 200 pounds of it...

A xenomorph is a pretty good choice for a knuckle duster topper I think. According to Wikipedia, these types of Aliens, unlike many others pitted against humans in the sci-fi genre, "do not have a technological civilization...

Like cooking? Like the Alien movie franchise? Most importantly, like making grotesque images out of your food? Alien: The Official Cookbook has hugged the face and burst forth from the chest of author Chris-Rachael Oseland...

Egg-->Facehugger-->Chestburster-->Xenomorph. Even at under a foot tall the Aliens Four Stages of Fear Beer Stein lives up to its name in its representation of Xenomorph evolution. I've never felt less inclined...

And the Minifig even looks exactly like Sigourney Weaver! OK, as much as I wanted the life-size Caterpillar Power Loader Dustin Kiska made, I find Ichiban Toys' LEGO version just as enticing and commendable in execution...

Well, maybe it's just called the "Hold Me" coat, but this bizarrre gem from Si Chan's fall collection of handsy fashion looks like a line of little green men flanking the zipper--and the wearer's torso--to me. Chan explains...

If you want to know about the best projectile launchers, you're probably getting ready to orchestrate a cubicle warfare offensive at work. Or maybe you just need some new catapult- and slingshot-shaped desktop toys. Or...

Fully motorized with a 50-dart drum. Talk about things that make you go hmmm BOOM! Nerf's forthcoming Elite Titan CS-50 toy blaster is ready to unleash a hailstorm of foam in battle...

Usually T-Rex is all about shoving things into his mouth, but here in T-Rex Foam Dart Gun form he takes a turn at spewing them out. His resultant destruction and turmoil remain the same. Nice shot, T-Rex! You hit my mama's...