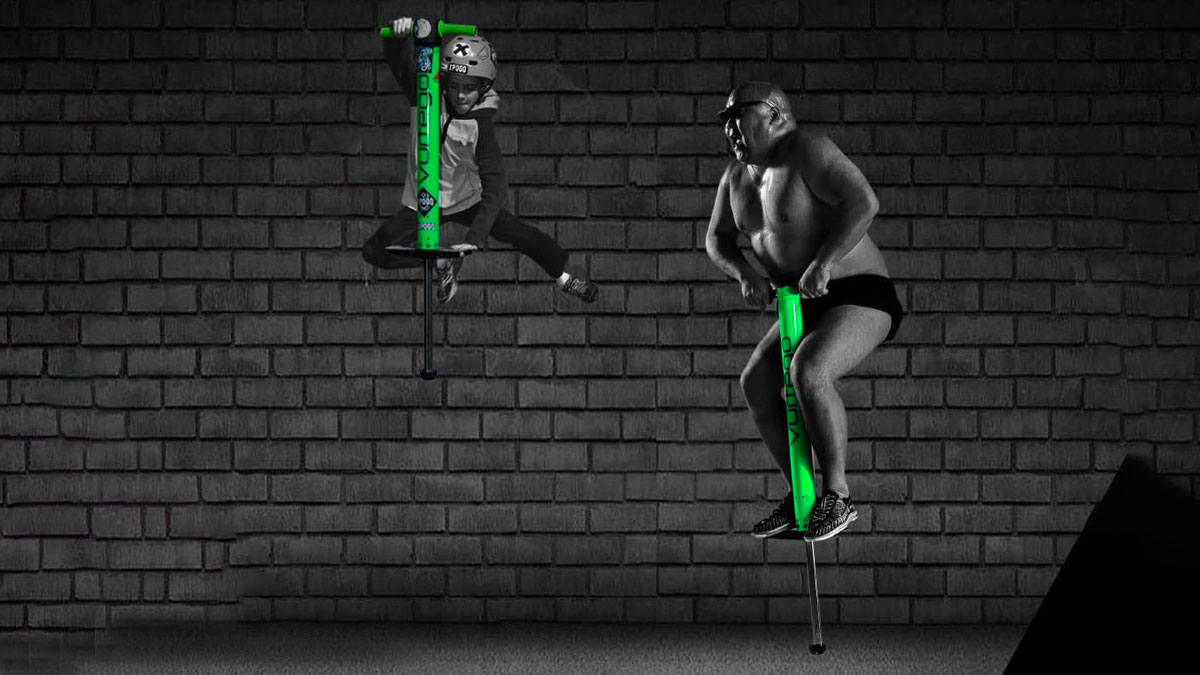 The Vurtego V4 Pro is one of the few kinds of bouncy, bouncy this dude would never touch. First of all, the air-powered adult pogo stick is designed with an 11+-foot vertical, and as Blood, Sweat & Tears kindly reminds us: What goes up must come down. Likely hard. And for me, likely not on the skinny air-powered pogo post I'm supposed to. Even just hopping around on the V4 Pro's low end of a couple of inches...even just trying to hop onto the V4 Pro itself would probably twist my ankle, throw my back out, strain a muscle in my pec, and ding my ulnar nerve so hard I lose feeling in my pinky finger for a month.

And second of all, a $500 pogo stick?! I could buy so many safer sporting goods that are just as cool for that amount. Like a stand up paddleboard. Or an Assled.

But if you're a grown-ass dude or lady, and you have the need, the need for pogo, look no further than the Vurtego V4 Pro Pogo Stick. Self-described as "the most advanced pogo stick ever created," in addition to jumping super high and super low, V4 Pro pogoers can also set a specific jump height using the stick's air pressure setting. So too does adjusting the air pressure allow anyone 75 pounds and up to use the V4 Pro, as pushing a higher psi creates a stiffer, more powerful spring that can accommodate heavier jumpers, and vice versa.

If you're looking to put some spring in your step...you'll have to look beyond the Vurtego V4 Pro, because you won't find a single metal coil in this pogo stick. But. If you'd settle for pumping 90 psi underfoot, hop...

Drugs & alcohol, bullies, gluten--parents have got a lot of evils to worry about as they raise their children these days. So I get why a lot of them are anti-trampoline. Why add flying off a spring-loaded canvas bed and...

Originally developed by a doctor for rehab patients with knee, hip, and back injuries, Kangoo Jump anti-gravity boots provide former runners with an option for continuing their cardiovascular torture of choice nearly...

Extreme sport leg extensions. I'll say. Maybe you could strap on a pair of Poweriser stilts and bound around like a bunny rabbit, leaping up to 6-1/2' in the air, taking 16' giant steps, and running 100m sprints without...

You don't need to be a fat boy, or even a boy, to assume the position of Launcher or Launchee on the Fat Boys Blob. All you need is a craving for a rush of adrenaline and a fearlessness in the face of heights...

Not since Kris Kross has something made me wanna jump!jump! so bad. The Smart Rope is a jump rope embedded with a strip of LEDs that doesn't just turn your cardio session into a disco, but actually displays your jump...

One question that's been on my mind a lot lately is, how can we make trampolines more dangerous? Seems like Biubee has been pondering the same thing, but unlike me, they've come up with a terrific answer: a 49' long trampoline...

Whether you want to increase your explosive power or just make a couple of giant blue goose eggs appear on your shins, box jumps are for you. And Stamina's PlyoBox, a steel X-shaped bench with 4 adjustable heights, can...

Bouncy Bands join bounce houses, bouncing balls, and bouncing from family get-togethers in the bouncing stages of childhood development. Made for middle and high school chairs, Bouncy Bands give fidgety kids a safe and...

If my girlfriend agreed to Hippity Hop down the aisle on an Anna the Magical Unicorn Ball I might agree to propose to her. Haha, yeah you're right. No I wouldn't. That was a bad example. How about: if my co-workers agreed...

Volkner Mobil RVs don't come with a Mini-Cooper, but if you want to make highest and best use of the motorhomes' center built-in car storage, I'd highly recommend getting one. Volkner says a new Fiat 500 would work too...