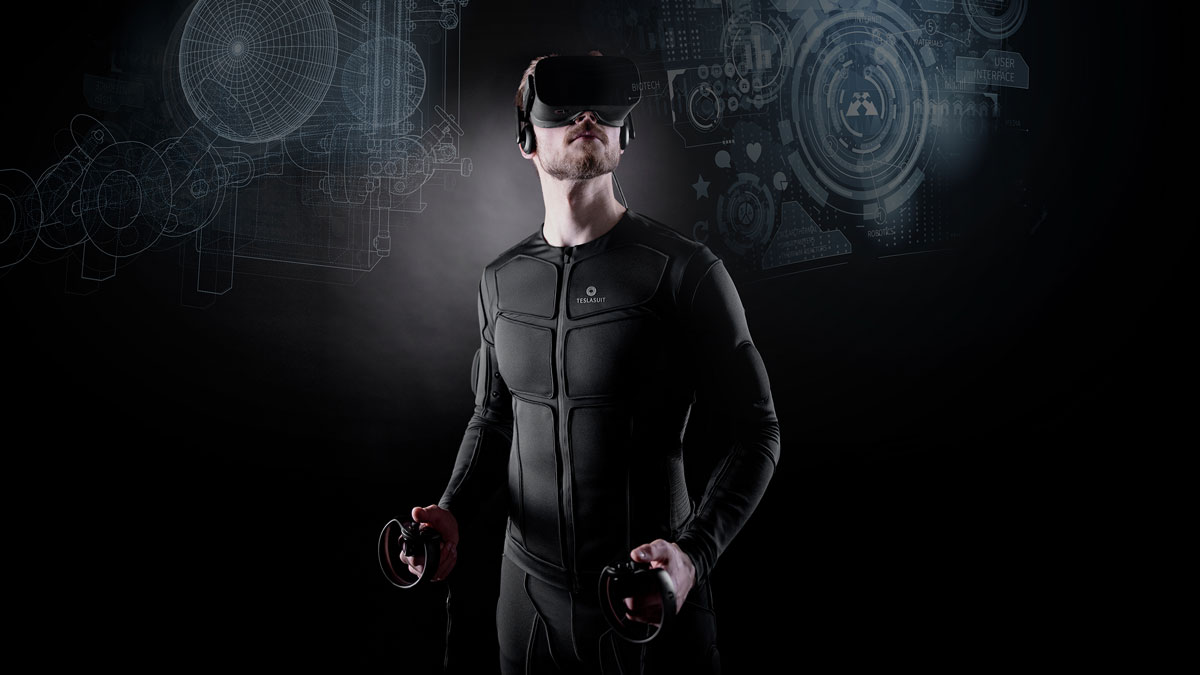 No, the Teslasuit is not for racing your Tesla. Or, more realistically, the Teslasuit is not a 3-piece Armani with embroidered logos and a gold-threaded pocket square to wear while cruising your Model S around the suburbs. Sadly, the Teslasuit also is not an Iron Man-esque piece of armor that will instantly imbue its wearer with the brains, ambition, and showmanship of Nikola Tesla. But it still registers a solid 7, maybe 8, on the I Want That scale.

The Teslasuit is a full-body haptic suit that pairs with VR headsets and other devices to allow wearers to touch, to feel, to get even more real with their environment, be it gaming, professional, fitness, or an augmented version of real life. Created spaces won't be just visually and acoustically immersive and 3-dimensional, but tactilely interactive as well.

The Teslasuit, which consists of a control belt, zip-up jacket and wetsuit-looking trousers, has an intricate, 30- or 52-channel electro-tactile haptic feedback system built into it that enables wearers to touch and feel objects they encounter in virtual worlds. (Yeah, I know what you're thinking. Me too. Boobies.)

The T-belt serves as the suit's wireless connection point to VR headsets, including the Oculus, Google Glass, META Space Glasses, and PlaystationVR, plus game consoles, PCs, tablets, and smartphones.

The jacket and pants stimulate the body and generate the same electric pulses when interaction occurs in the virtual world that the act of touching a real object does in real life. The pulses are then transmitted to the brain, where "feeling" occurs. By using tech to elicit the biological processes that take place when we have tactile interaction with an object, Teslasuit says our brains will interpret the sensation and have a physical response whether the object is there or not.

In other words, you'll be able to experience heat or cold, a hug or a bullet, without actually encountering them. Teslasuit believes this is good news for: gaming; virtual dating; sports & fitness; education; psychology; and real-life public safety training simulations.

Hands-free? That all you got, newfangled tech? Well, Wayband sees your hands-free gadgets, and raises you one that's eyes-free and ears-free too. The Wayband Haptic Navigation App & Wristband is a personal navigator that...

Hey, who put a quarter in my gaming chair? X Rocker's Pro H3 Vibrating Gaming Chair probably caters to gamers too young to get that joke...or adults who aren't really in the market for getting laid anyway...but when can...

Face ID compatible respirator masks are surgical masks printed with the bottom half of your actual face to facilitate biometric recognition when you're contagious, or in the midst of a viral outbreak. That part is clear...

GlassUp. They're a pair of HUD smartphone-linked glasses that flash texts, emails, news updates, directions, any messages for which you would normally look down and consult a screen, right onto the glass in front of your...

Proto's forthcoming M is a tabletop holographic communication / media device and, in my opinion, the newest best way to have dinner with your in-laws. Look at how happy that mom and baby look talking to Hologramma on...

Artificial intelligence and robotics, the virtual reality video game and the actual reality physical game, Anki and iOS: these are the parts of Anki DRIVE that make it a whole new experience in the gaming industry. A...

Full-body immersion into the world of virtual reality gaming, with a side of actual reality exercise. The Omni isn't the first VR treadmill we've seen (check out the WizDish) but it appears to be the most sophisticated...

The Emerge Home is a forthcoming VR companion for the Oculus Quest 2 virtual reality headset. A very, you could say, touchy-feely companion. The Emerge Home system uses the Emerge Wave-1, a device that emits ultrasonic...

Even in the virtual world, when it rains it pours. Not only is the ARAIG (As Real As It Gets) multi-sensory feedback suit the latest in a recent lineup of virtual gaming enhancement gear, but it has also joined VR immersive...