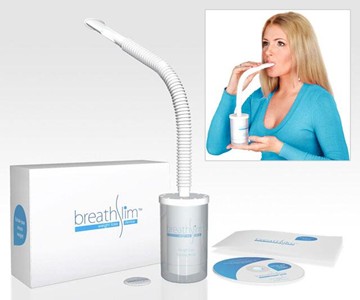 I feel like Bas Rutten made a similar, but much sexier-looking version (uh, relatively speaking) of this Breathslim weight loss contraption. His O2 trainer gets a lot of impassioned feedback here, both from advocates and BS-callers, and I have a feeling the Breathslim breathing coach and oxygen booster will experience a similar fate.

On the one hand, the Breathslim apparatus looks ridiculous. Like something the infirm folk would be required to use from a hospital bed or nursing home. And telling people they'll lose weight by breathing through a bendy straw for 10 to 20 minutes a day? Why not tell them to turn all the lights off and bark like a dog? A big dog, of course.

On the other hand, Breathslim reviews aren't bad. They aren't in great number, but the 13 logged at printing gave the product an average of 4/5 stars. Most do point out, though, that it's not a wonder tool intended to melt away fat. The Breathslim people themselves also note the primary goal of their device is to train users to breathe properly. From the diaphragm. Pursuant to correct, consistent use, Breathslim's direct benefit is to create resistance and an air pressure increase in the lungs, which can then double the quantity of oxygen flow through the bloodstream. More oxygen in the bloodstream means more oxygen accessing vital organs such as the brain.

The intended effect of this oxygen increase is multi-parted, but in terms of weight loss Breathslim claims it will boost energy, improve metabolism, and curb feelings of hunger generated by a brain that poor breathing habits have long rendered fatigued and malnourished. One reviewer maintains that Breathslim delivers on all of these promises, but adeptly reminds us that it will not do much for people who Hoover up Cheetos and pot pies even when they don't feel hungry.

The resistive expiratory muscle training Breathslim conducts also endeavors to reduce stress, improve sleep, flush toxins, and better blood and lymph circulation. Results of the company's 3-month double-blind study of Breathslim efficacy, along with full reviews, can be found in the link below.

Merry Christmas, Chubs. Er, I mean, Happy Holidays, you svelte wall of muscle and poster child for athleticism. Here's a fabulous fitness gift to keep you that way...

Daiwa says their Vitality Swing, a chi swing machine, provides "passive exercise," and I don't know if that's true or possible, but I sure do like the sound of it. When in use, the machine sways back and forth, creating...

Well, $10 million is the price for the super deluxe, diamond-encrusted model of The Human Regenerator. Bargain hunters who are OK with regenerating unsound cells, strengthening their immune systems, and enhancing skin...

The Blocc face shield is here to face off with your wandering hands and Shut. Them Down. No matter how charming, how persuasive, how pushy they get, Blocc will turn into your personal bouncer, a polycarbonate wall of...

We wondered too, but the answer is no. blk. black bottled water is not part of an SNL skit ŕ la black caulk or Colon Blow. It's a real artesian spring water from aquifers in Canada's Sandiland Forest Reserve. And it takes...

Ye of long legs, take note: though the Knee Defender can't increase the amount of space you have within your sphere of airplane seat misery, it can prevent further reduction of the already minimal square footage. Comprised...

The LIFEID Medical Alert Bracelet isn't the sexiest piece of jewelry I've ever seen, but neither is your fitness tracker. And, hey, neither is dying because the first responders trying to save your life after a car crash...

I know a lot of fat magnets. I bet you do too. Most of them look more like an ass in need of a run around the block than a reimagined dreidel though. But this Fat Magnet, the dreidel kind, is actually here to help the...

What's your Oura? Welp, according to the personal health tracker Oura Ring, it's tired, inactive, and slow to recover. Oh boy, another gadget to tell you you're doing life all wrong!...

Are you stronger than electromagnetism? O2 Magnetic Dumbbells, a pair of rings with embedded electromagnets, work in tandem to generate resistance as their ends repel, and challenge users to build muscle by fighting their...

Smooth, full-flavored, and chock full of vitamins, carrot cigarettes fill the void in the health-conscious segment of the tobacco industry. Smokers looking to refine their habit, or live past the age of 60, and non-smokers...