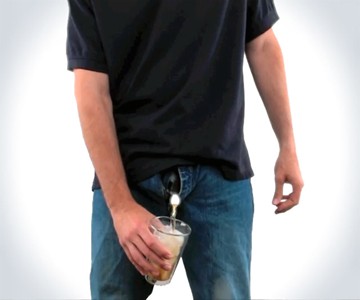 Ahhh, summertime. 'Tis the season. To be sneaky. The Freedom Flask, in the same spirit of duplicity and cunning as the Nano Hummingbird Spy Camera and the iStash, aids users in their quests to do things they aren't supposed to behind the backs of those who would make them stop. Easily concealed under clothes as a belted pouch, the Freedom Flask holds up to 32 ounces of your favorite booze, which it covertly distributes through an open fly via its extendable hose and nozzle. Men, not only is it now possible to have two pants snakes, but it's possible for both to inspire equal and unmitigated displays of awe and reverence from those lucky enough to catch a glimpse of them. Ladies, say goodbye to your sobriety and better judgment. (Or wear a Freedom Flask yourself across the chesticular region, and garner some extra attention of your own!)

Attached to each bladder is a 42-inch adjustable belt with secure-lock buckle. Flasks themselves are guaranteed leakproof, and made with safe, medical-grade materials in, naturally, none other than the US of A. Flask masters assure us carrying Freedom 'round the gut line is comfortable, and will pay for itself after a single use. Our one concern--well, aside from getting ejected from the Bieber concert we paid $150 a ticket for--is drinking beer at body temperature. Under a shirt, nestled up against our midsections, there's really no hope of pseudo-pissing out a cold one. Probably best to stick with hard alcohol flask fillers, and shoot directly into ice.

Looks like Viski's Cigar Flask can hold one 54-gauge cigar, and one...tiny sip of liquor. OK, 2 ounces of liquor - Scotch if you're following the rules of cigar-and-booze consumption - so basically a shot...

Whoa. Check out The Bartender's Manifesto's Guide to Citrus Garnish Styles section. I am amazed. Not only at the number of citrus garnish styles in existence, but also in how this manual of How to Think, Drink, and Create...

Those who do not live in Washington or Colorado, I have a consolation inhalation prize for you. A glass globe-and-funnel contraption straight out of the Real Genius chem lab, the Vaportini kit gassifies alcohol into a...

And you always thought she was an icy bitch because you couldn't get to second base. The Boob Luge puts a positive spin on the cold reality of interacting with women. Also, just like in the good ol' days of infancy, it...

Sometimes it's fun to play mad scientist. Particularly when doing so involves hallucinogens. OK, so they removed the thujone component from absinthe, but still, 80% of any experience is perception, right? So if I think...

The only thing better than a tres leches cake is quatro tequilas on top of it. These Cake Topper Shot Glasses see your fluffy yellow sponges layered with rich buttercream icing, and raise you, well, a hearty nip of liquor...

Some call it the can that won WWII. Even though the Germans created the Wehrmacht-Einheitskanister, American and British forces quickly copied the design and used it for the efficient storage and safe transport of fuel...

Of all the gross applications of otherwise fine foods, the VELVEETA Veltini Kit is definitely...one of the better ones. Cheese, olives, vodka, vermouth, and, and Jumbo VELVEETA Shells & Cheese?! I mean, sure, it looks...