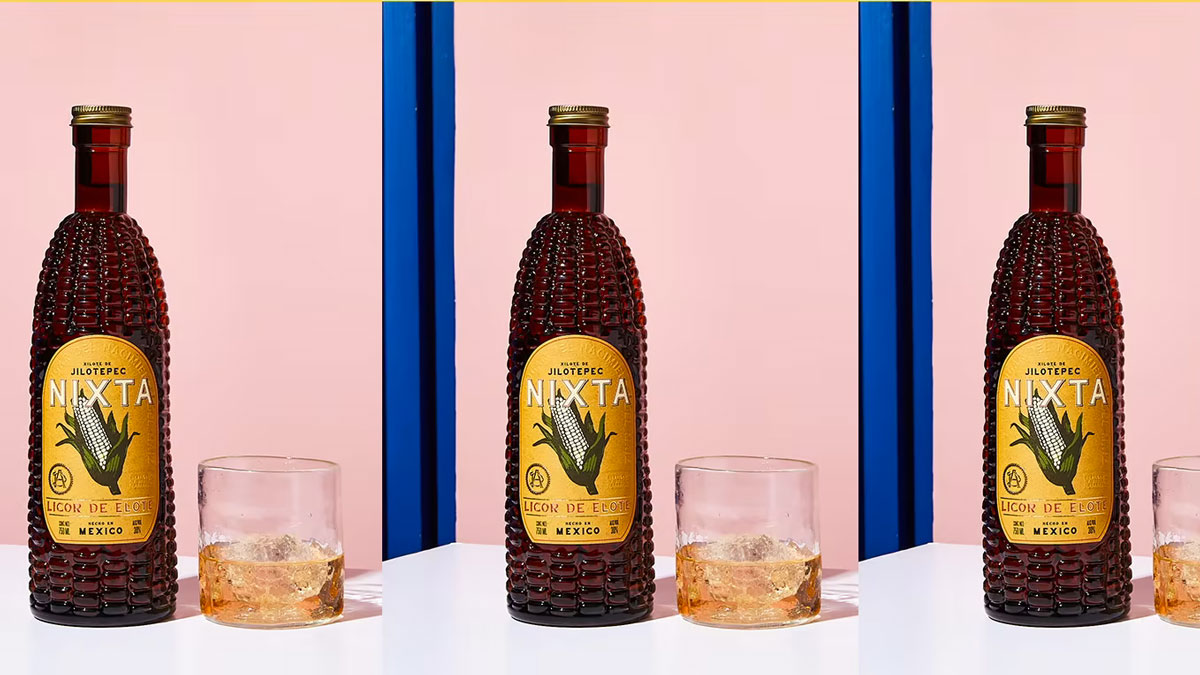 Liquid. Corn. Sounds like a joke to me. A real corny joke. But, hey, I hear Nixta Licor de Elote - that's Corn Liqueur for the non-Spanish speakers - is actually pretty tasty. I'd try it. Way before I'd try Scottish Beithir Fire 150-proof beer, anyway. Made from ancestral cacahuazintle maize, Nixta Licor de Elote is grown in the high valleys and foothills of the Nevado de Toluca volcano in Central Mexico.

"Nixta" is short for nixtamalization, the ancestral process by which the corn for the corn liqueur is prepared. It's a 4,000-year-old technique that involves soaking maize in an alkaline solution, such as limewater, and then washing and hulling it to remove the majority of aflatoxins from mycotoxin-contaminated corn. Nope, I don't know what aflatoxins or mycotoxin-contaminated corn are either, but they sound bad, and exactly like something you'd want to Nixta from your food and beverages.

Nixta Licor de Elote is made by the Destileria y Bodega Abasolo, which describes their corn liqueur's color as "intense straw with golden highlights." On the nose you'll get cornbread, toasted corn, vanilla, and caramel, and in the mouth it's all about the sweet and toasty corn flavors. Move over Flakes, Pops, Nuts, and cobs, Nixta Licor de Elote is the new best presentation of corn on the block.

Behold a land o' lakes of butter, and the Cuisinart Butter Wheel ready to turn through it proud as Mary, so you can slather the melted gold inside onto bread, buns, baguettes, and dinner rolls for grilling or griddling...

Oooh, iridescent green corn on the cob lookin' all like a mermaid's tail. Or the Incredible Hulk. Or someone who never brushes their teeth. Alright, sign me up. I'm ready to get the captivating moss and emerald, clover...

Forget enemies and evil villains, what you really need some indestructible adamantium dagger claws to put in check is your corn on the cob. These new Wolverine corn cob holders - delightfully named Corn on the Claws -...

This Amish Country Microwave Popcorn on the Cob makes me feel just like I did when I saw the New England Hot Dog Bun Pan. ... ... Did you know you can pop popcorn right off the cob?! That there exists such a thing as...

The Taco Toaster! Here to save us from the horrible taco shell shortage we've been experiencing! It's a pair of dashing red tortilla shapers that slip right into your home toaster to turn your store-bought (or homemade)...

At its fluffy white, carb-laden heart, this is a Microwave Potato Cooker Bag. The red polyester pouch is nukable, washable, reusable, and amenable to turning raw potatoes into moist and delicious bakers - or moist and...

I guess they couldn't decide whether people would prefer to skewer their corn with pirate or ninja swords, so they just made a set incorporating both. Alien vs. Predator-style. Pirate vs. Ninja--who would win that battle?...